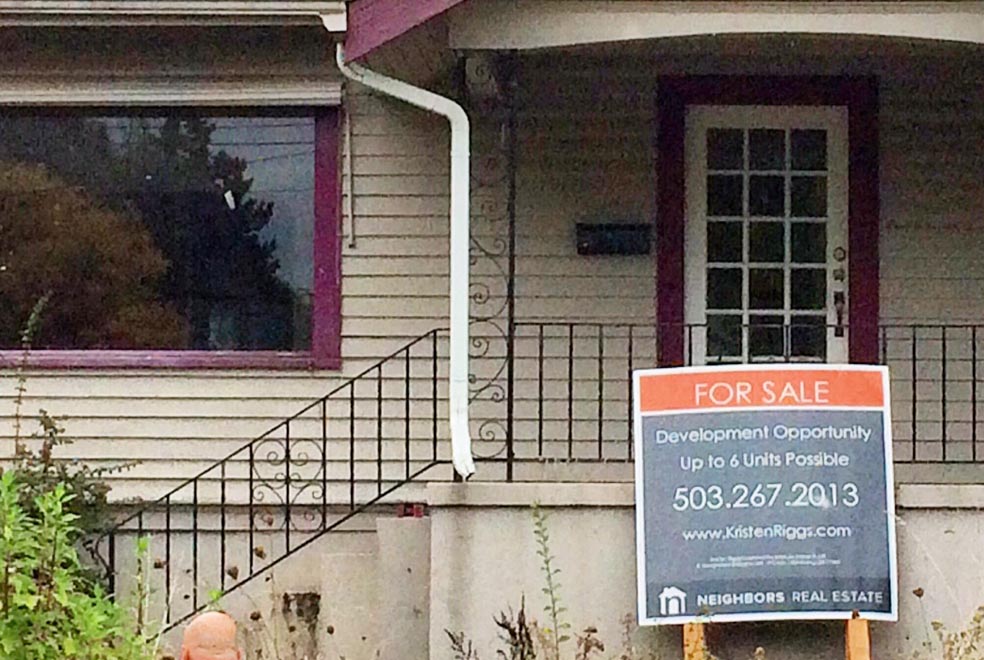 Portland and many other cities around the country are facing the problem of adding more housing and infrastructure as more and more people move into the city. In short, they are being forced to densify, to fit more people into a limited amount of space. Portland has an urban growth boundary, so density is a specially pressing problem in the face of a projected population boom of 725,000 additional people in 20 years. The threat of people moving in with nowhere to house them has led to large swaths of the historic fabric of urban neighborhoods to be destroyed and replaced with modern midrises and high-rises that are often out of many people’s price range. It’s led to people being displaced from their neighborhoods either to make room for new buildings or just simply by being priced out as densification has brought gentrification along with it. Cities have done a poor job in adding density in a gentler, kinder way that has fewer consequences to their existing character and existing populations, which are the reasons why people are moving there in the first place. A great example of this is Vancouver, BC, which has increasingly become a sea of anonymous glass and steel high-rises in lieu of the quaint, diverse and beautiful city it was known to be. Another example is how high-rise development is threatening to destroy the walkable and historic downtown arts district of Roosevelt Row in Phoenix, AZ.

The thing is, high-rises aren’t the first thing cities should look to if they want to densify. There are a lot of options that can add to, not take away, from its organic vibrancy and sense of community. Counterintuitively, densification can be isolating rather than connecting. You’d think that adding more people to a smaller place would automatically mean more social cohesion. But high-rises have the exact opposite effect. Piling people into tall buildings separates them from the street and from each other, creating silos of isolated people looking at other people from a distance. It doesn’t have to be that way. Cities don’s have to be isolating. There are ways to add density and at the same time build community. Here are 5 ways to do just that:

There are lots of gorgeous mansions and large single-family homes lining the streets of Portland and other cities. One way to add density is to make these single-family houses into community houses that are home to several people/families instead of just one family. This is not uncommon here in Portland. Many who own a house rent it out to several people to help pay their mortgage, or one main renter will then sub-lease a house to other tenants to help pay the rent.

The benefits of this living arrangement are many. First, it preserves a city’s older fabric by saving large old homes instead of tearing them down. Second, it’s a great way to form community in an age where more people are single than ever before. Third, it decreases the carbon footprint of a large home as the amenities in it are shared by many, not just by one family. For example, one kitchen ends up serving the needs of many people. In Portland, you are only allowed to have 6 unrelated people living in one single-family house. But this code needs to be updated because there are large homes in Portland, that if well redesigned, could house many more people comfortably.

Single-family homes can easily be retrofitted to accommodate more people. In a multi-story house it helps to have a toilet room on each floor and it’s even better if there is a shower on each floor too. Some Victorian homes come with two kitchens, and these homes are great candidates to become community homes. Sometimes adding a closet to a den or a library room will make it into an official bedroom whereby you can house another person or couple in the house. Making sure you have enough egress windows and doors in a single-family house is also very important when turning it into a community house.

An Accessory Dwelling Units (ADU) is a second house in the yard of a single-family house. Because the main house probably takes up a lot of room on the lot, the second house is usually smaller and is a great opportunity for a tiny house. Single-family homes often sit on large lots that are taken up with nothing but grass. A better use of large or medium-sized single-family lots is to put more housing on them. By adding ADUs to them, you can double the density of a city without having to tear down any existing homes and at the same time keep the urban fabric at a human scale. Plus, you create community by putting two different households in a closer setting where communication and sharing is encouraged. One of the biggest benefits of ADUs is that it allows traditionally high-end neighborhoods to be accessible to lower-income groups of people. For example, perhaps a wealthy couple in their mid-50s owns a large home in the posh Irvington neighborhood in northeast Portland. But if that home had an ADU, then a young couple who is just starting out could also benefit from the beauty and amenities of this fantastic neighborhood at a much lower premium than having to own or rent a huge house in that fancy neighborhood. ADUs can be rented at reasonable rates because of their size giving a way for a wider range of people to enjoy an established neighborhood. Plus, ADUs are a great way for owners of single-family homes to make passive income from their property.

Instead of jumping from single-family homes to building high-rises or even mid-rises, there are a lot of steps in between for adding density. Duplex, three-plex and fourplex developments are often overlooked as great solutions for density that also maintain the livability of a city. Again, building a duplex instead of a single-family house instantly doubles the density. Plus, these developments keep the feel, scale and benefits of a single-family house while being multi-family. For example, you have access to a yard for gardening or just hanging out on summer days. And more often than not, duplexes, threeplexes and fourplexes have front doors that lead right out to the street level, unlike in high-rise or midrise developemnts where you have to take the stairs or elevator down to the street, which ends up killing street life and squelching a sense of community.

A new trend that is just emerging in Portland is the idea of building a community of tiny houses on a single large lot. So instead of doing what has traditionally been done – building one large single-family house per lot, this allows several households on one lot. This is a great, community-scaled and human-scaled way to add density. The name of the game is shared amenities. You can build one building that can serve as a shared amenity for the whole community, not unlike in cohousing. The one building can have showers, a kitchen, a media room, laundry, bike storage and other storage that are shared among the tiny homes. This frees up the tiny homes to be tiny. Essentially, each tiny home can have as little as a bed and toilet, though some tiny households may opt to have more. This is a very exciting and potentially excellent solution to Portland’s density problems.

Recently I heard a story from a colleague who travelled to Morocco. She told me that Morocco has shared amenities built into their urban fabric in addition to things like laundromats, which we in the west are used to. She encountered bakeries that baked bread for people who did not have ovens in their homes. People would bring their kneaded and prepared dough to their local bakery to be baked. And the bakery soon became a neighborhood hub where people ran into each other and shared stories and updates. She also said that the communal baths in Morocco were a well-used shared amenity. People who may not have showers or bath tubs in their homes could use the communal baths, which were also a hot spot for the community to get together and talk. Providing shared amenities like this on an urban scale not only helps build community and cohesion among people, but it allows individual homes to be smaller, which allows greater density. With shared urban amenities, not every home needs to have its own laundry machines, its own oven, or even its own shower facility. Not having these facilities in-house may be a big leap for many, but for those who are willing to sacrifice them for more affordable housing, then it’s a nice option.