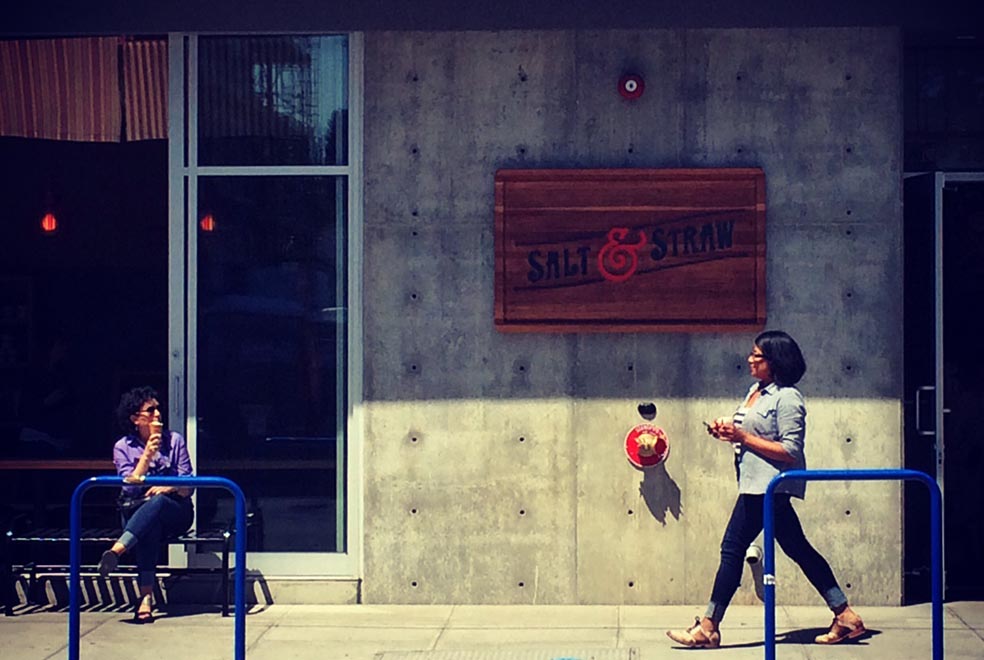 Gentrification Hits Home: My Rent Goes Up and the $8 Sundae at Salt & Straw

Last week I heard a shuffle at my front door and saw that my building manager was slipping a notice under my door. I opened it only to read that my rent was being raised by 10%! I have lived in this cute little studio in the coveted Sunnyside Neighborhood in inner Southeast Portland for just over a year now. During this time, my rent has gone up a total of 14%. If it continues at this pace, I’ll have to find another place to live because I’ll be priced out of my very walkable, very centrally-located neighborhood.

The Walk Score in my neighborhood is 94 and is a veritable walker’s paradise. I am only a 5 minute walk away from Fred Meyer’s and an 8 minute walk away from New Seasons. I can easily run errands by foot, including going to the clinic, the bank and the post office. I live within walking distance to a lot of really great restaurants, the Bagdad Theater, and some of the best resale shops in the city. I have loved living in this neighborhood because this experience is precisely why I moved to Portland – the walkability, bike-ability and the vibrancy that comes along with those two things.

It used to be that what was valuable wasn’t so much how walkable your neighborhood was, but how big your house was. But more and more, a walkable lifestyle has become a premium amenity, which explains why wealthy whites have moved into the more walkable neighborhoods of Portland and displaced less wealthy minorities out into the more car-oriented suburban fringes of the city.

Why some people hate Salt & Straw

I have written about gentrification before and said that it’s both good and bad. But now that I feel the effects of it myself, I now see why it’s such an emotional tinderbox. People who are just going about their lives are having to face eviction, displacement, or just have to spend a lot more on housing if they want to stay where they are because of forces completely out of their control. In other words, you could be doing everything “right” in your life – being a responsible citizen, earning a viable income and doing your best – but it still isn’t good enough. Not unlike the tragedy of having your house destroyed by a natural phenomenon like a hurricane or a flood, you could become a victim of the “greed phenomenon” where developers look with dollar signs in their eyes at the house you live in with the intention of razing it and building a hugely profitable and expensive condo building there instead.

Now I can see why some people look at Salt & Straw with disdain. Salt & Straw is a high-end ice cream shop which is known for long lines out the door. It is the perfect symbol of gentrification because the store is usually located in new mixed-use developments on gentrified streets such as NW 23rd in the Northwest, Alberta in the Northeast and Division in the Southeast. It is also a great symbols of gentrification because of its prices. A scoop of Salt & Straw costs $3.95 and a sundae costs $8! Admittedly, Salt & Straw ice cream sells some of the best ice cream I have ever had and their flavor combinations are nothing short of genius, but this is price gouging. It gouges its prices because it can and because paying a lot for ice-cream makes people feel like the Haves instead of the Have Nots.

The ice cream divide between the Haves and the Have Nots

Places like Salt & Straw help draw the line in the sand between people who have and those who have not. The buildings and neighborhoods that places like Salt & Straw occupy also help draw that line because, increasingly, a lot of people can’t afford to live in them. For example, people who “have” can walk over to Salt & Straw from their nearby house or condo for an expensive scoop, while people who “have not” might have to drive over from a far away, more affordable neighborhood. And if they don’t have a car, they may have to take the bus. But who’s going to take the bus to go get an expensive scoop of ice-cream? And so you have a very distinctive class of people at the Salt & Straw – the Haves. While the Have Nots must content themselves with a trip to the Dairy Queen or store-bought ice-cream at home.

I like Salt & Straw, even though I can’t really afford to go there a lot. I appreciate the great ice cream and flavors they have to offer, though I balk at the prices. I even enjoy standing in line and the community feel of having to squeeze in among all the people who’re also enjoying an expensive scoop.

I don’t believe what Salt & Straw has to offer has to be exclusively available only to the wealthy. Somehow we have to transcend the ice cream divide between the Haves and Have Nots. Toward this quest, let’s look at the things that the Haves and the Have Nots share in common:

1. Both the Haves and Have Nots love Portland.

2. Both the Haves and Have Nots like good ice cream.

3. Both the Haves and Have Nots enjoy the great things that make Portland funky and weird and attractive in the first place – like the food cart pod on Hawthorne and SE 12th that’s being displaced because a new development in going in there.

4. Neither the Haves or the Have Nots want to see Portland become a suburbanized, homogenous landscape filled with the same businesses and urban form that you could find in any other city, like what has happened in Vancouver, BC with its pervasive glass towers. Everyone wants Portland to keep its unique character, scale and personality.

So how can we slow the momentum of the divide, where the artists and the creatives and the DIY-ers who made Portland attractive to the yuppies that are moving in today are not displaced into far flung suburban fringes? How can we make walkable neighborhoods, the community that is generated at Salt & Straw, and the amenities that come with improved neighborhoods available to more people and not just the privileged few?

Some solutions to consider

2. Affordable retail component to new developments. Instead of displacing the food carts on Hawthorne and SE 12th, the developers could offer some affordable retail space in their building where some of those food carts can transition into a more permanent bricks and mortar establishment. This would be a way to incorporate the existing character of a place while allowing the city to evolve and change. Or, the developers could set aside some open space and allow the food carts to stay in the location, thereby keeping the vibrancy and community asset, but building around it.

3. Instead of demolishing communal houses like the Breakfast House on Division and 34th that is slated for demolition to make room for a new development, why not add density into the city of Portland while using the existing building stock? I know of a few people who have bought large single-family homes and have turned them into communal living homes, sometimes housing as many as 10 people in a comfortable, affordable and community setting. While we won’t be able to save all the old buildings in Portland, at least we can take a more nuanced approach at incorporating density within existing buildings whenever we can instead of routinely razing old housing stock and replacing it with 4 to 5 story new-build condo developments.

4. Existing businesses can learn to adapt and take advantage of a wealthier class of consumers that are moving into their neighborhoods instead of vacating gentrified commercial districts. For example, Manny Ramirez, long time owner of Dichter Pharmacy in the Inwood neighborhood of New York City, has changed his business to attract the new residents that are moving in. He stocks expensive lotions, organic moisturizers and designer toys for the wealthier yuppies and hipsters, but also keeps prices of basics like Tylenol under chain stores to serve the lower income residents of his neighborhood.

Tags: displacement, gentrification, housing, portland, salt & straw
« Subversive Transportation and the Cultural Oppression of Women  |  Gentrification: Original residents vs newcomers – is it all out war or are we all in this together? »