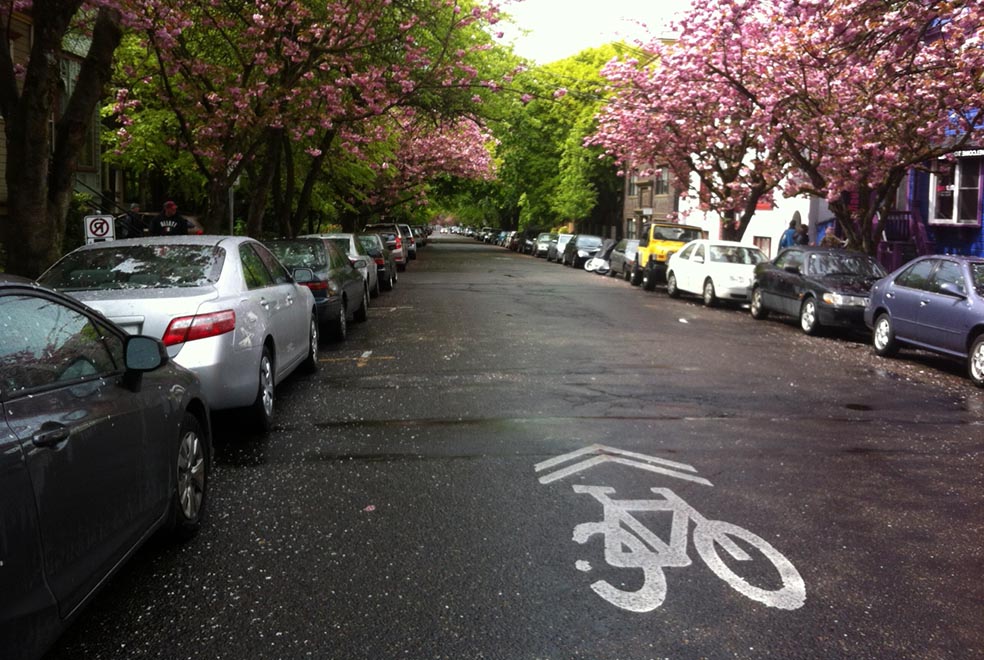 The Problem with Neighborhood Greenways

Neighborhood Greenways have been touted as the best way to make biking safe and appealing on American streets. They are low-cost, at only $250,000 per mile as opposed to $4 to $5 million per mile for cycle tracks, they don’t require heavy modification of existing streets, and they are easy to engineer. The concept of Neighborhood Greenways was developed by Portland Bureau of Transportation’s Greg Raisman and Mark Lear as a feasible way to make bicycling easy and safe for anyone who wants to bike. Having been first implemented in 2009 in Portland, they were widely installed in 2010 thru 2012, but construction of Greenways has slowed due to budget cuts in 2013 and in 2014.

The big picture plan calls for Neighborhood Greenways as only the first step in making bicycling a safe and appealing option for a big swath of Portlanders. “The strategy looked like this,” says Jonathan Maus of Bike Portland, “low-cost neighborhood greenways would make biking more popular, and that popularity would then drive political support for a far more expensive protected bike lane network that would make biking the fastest and most comfortable way for Portlanders to make trips of 3 miles or less.”

Since their inception, Neighborhood Greenways have not been the complete answer to bicycling infrastructure, and for good reason. Neighborhood Greenways relegate cyclists to quiet neighborhoods streets only, which is great for safety, but it’s not really that great for cyclists. It segregates them from the businesses and the street life that happens on commercial corridors. Diverting cyclists to residential streets keeps them from experiencing a significant segment of the city as commuters – the commercial street. Cyclists should be able to access both sectors of the city, instead of largely being kept out of one.

For example, I live two streets north of Hawthorne Boulevard and I never go to New Seasons on bike, which is only six blocks away. It’s just easier to walk on Hawthorne than to weave from Neighborhood Greenway to Neighborhood Greenway on either side of Hawthorne and cross the unfriendly, car-oriented Hawthorne. Diverting cyclists to residential streets, while it is admittedly easier, cheaper and safer on the whole, is bad for business as well, for the reasons I mentioned in my earlier post.

Neighborhood Greenways are a great way to get to different parts of the city, but they aren’t so great for running errands in your own part of the city. Let’s face it, we all, cyclists included, patronize the businesses on commercial corridors like Hawthorne Blvd., Mississipi Ave. and Alberta St. But for us cyclists, this patronage is not so easy, because these streets are designed mostly for motorists and if we’re lucky, sometimes for pedestrians. In essence, cyclists have to park their bikes and become pedestrians to use those streets. There is no thought given to bicycling on these commercial corridors and that has got to change. We’ve got to begin thinking of commercial corridor bicycling infrastructure in conjunction with Neighborhood Greenways!

In promising news, the recent controversy surrounding the 20s Bikeway Project, especially the stretch along NE 28th north of Burnside, has spurred the innovation of the Commercial Greenway. Here are details of how it would work on a guest post for BikePortland by traffic analyst Kirk Paulsen who came up with the idea. Commercial Greenways would provide bikes with the following benefits:

Commercial Greenways are part of the next frontier in bicycle infrastructure development in Portland. We must welcome bikes on our commercial corridors, starting with the narrow ones, like Division and Alberta, and working up to the big ones, like Burnside and NE Broadway. Until cyclists can safely ride on commercial streets as well as quiet neighborhood ones, there is no way that Portland will reach it’s goal of 25% of all trips being on bike by 2030.