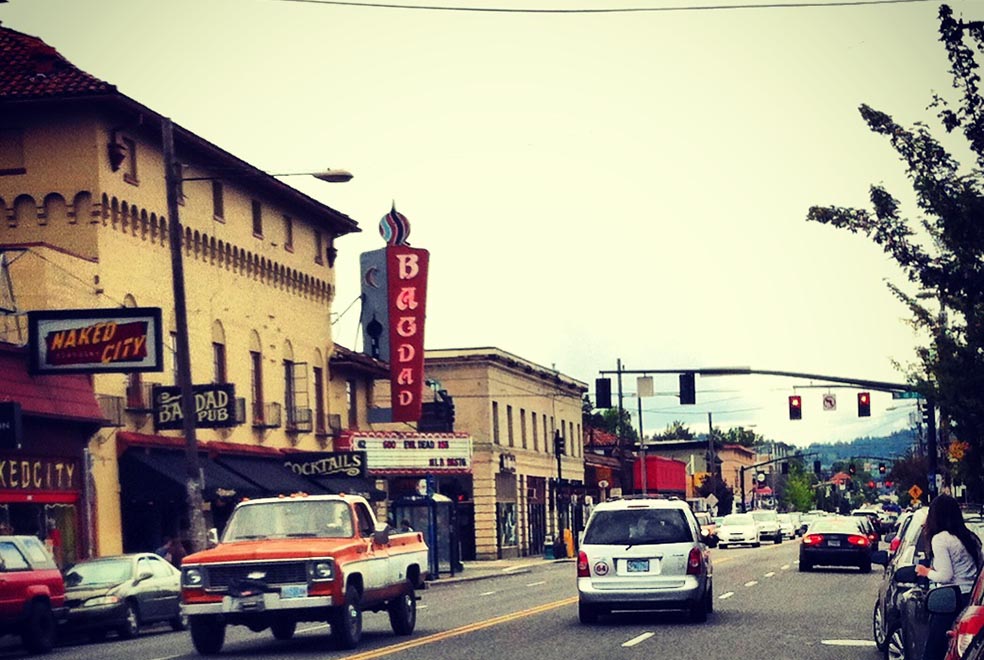 The history of Hawthorne Boulevard is a microcosm of the history of the entire city of Portland. It reflects the city’s early beginnings in agriculture, its economic booms and busts, it’s housing expansion, and it’s movement from horse and buggies to streetcars to buses to personal cars.

This Thursday, June 20, 2013, I will be leading a Pedalpalooza bike ride about the Urban Architecture of Hawthorne Boulevard, focusing on a 100 years of history from 1850 to 1950. We’ll be meeting at Albina Press on 5012 SE Hawthorne Blvd. at 2:00pm, we’ll roll at 2:30pm…Click here or here for more information.

Below is a timeline of all the changes that happened on Hawthorne from its inception as a country road called U street to a bustling vehicle thoroughfare in 1950.

1850 – Hawthorne is the southernmost boundary of the new city of East Portland and is called U Street. At this time, East Portland and Portland are two different cities. James Stephens establishes the Stark Street ferry to transport agricultural commodities from fertile eastern regions to the fledgling town of Portland across the Willamette River.

1840s to 1855 – Early settlers stake claims west of Mt. Tabor. These settlers use the Stephens’ Stark Street ferry to do business.

1851 – Much of the land that now lies between SE 30th and SE 38th belongs to farmer Sheldon Murray. He begins to sell it for about $10/acre. He sells the largest portion, 160 acres, to James and Jane Abraham and this tract of land later becomes the Sunnyside Neighborhood.

1858 – Dr. J.C. Hawthorne arrives in Portland, to care for the county’s poor patients.

1862 – Stephens donates seven acres of prime property on U Street to Hawthorne to establish the Oregon Hospital for the Insane. U Street becomes known as Asylum Avenue.

1870s – East Portland grows in importance as a shipping and agricultural center.

1875 – Farmer William Beck suggests that a bridge be built to link the towns of Portland and East Portland, something that ferry owners did not like at all.

1880 – Construction of the Morrison Street Bridge begins with the support of J.C. Hawthorne.

1882 – Three businessmen, Henry W. Prettyman, W.M. Watson, and John Campbell begin the West Portland Railway Company, proposing streetcar lines for SE Belmont and SE Morrison Streets. This, in addition to the construction of Morrison Bridge, leads to a frenzy of land speculation in the Hawthorne area and starts to change the complexion of East Portland from agricultural to suburban.

1880s – The east side of the Willamette River surpasses the west side in industry and new growth and land developers begin looking east of the river to build housing. There is a tremendous surge of transit-oriented development.

1883 – The Oregon Hospital for the Insane closes and the area is converted into a tree-lined park.

1888 – The name of the street is changed from Asylum Avenue to Hawthorne Avenue. The Mt. Tabor Street Railway Co. runs a steam-powered streetcar down Hawthorne Blvd. between present-day SE 5th and SE 54th avenues. Until now, the street has been a country road, running through orchards and berry fields.

1891 – The Madison Bridge is completed and makes a direct streetcar commute from Mt. Tabor into downtown Portland.

1890s to 1920s – Retail strips and clusters of local businesses fill in along Hawthorne Blvd, making a linear district that serves local residents and commuting patrons traveling from Mt. Tabor and the Lents Neighborhoods to downtown Portland. The predominant architectural style is Streetcar Era Commercial – two or three-story, mixed use retail with housing above. Buildings are built right up to the front property line and are constructed with wood, brick or stucco, with brick and wood detailing. These buildings help define the edge of the street and enhance walkability with storefront windows and doors. Nodes of commercial activity grow between SE 34th and SE 39th Avenues and between SE 46th and SE 50th Avenues. Along the streetcar routes on SE Belmont and SE Hawthorne, small specialty stores and services such as grocers, butchers, hardware stores and beauty parlors open to serve neighborhood shoppers, though people still make their major purchases in downtown Portland.

1891 – East Portland gets annexed into Portland. The streets on the east side of the Willamette are renamed to allow for continuity and new and improved water main and sewage system are installed.

1905 – The Lewis and Clark Expedition provides a jolt for the Portland economy.

1905 to 1912 – The population center for Portland is permanently shifted to the east side.

1910 – SE 39th Avenue is improved between Stark and Hawthorne. These types of road improvements make for the demise of the streetcar as personal automobiles become more affordable and grow in popularity.

1915 – Portland has the 3rd most extensive railway system in the country. But even this extensive system is not able to compete with the convenience of the automobile.

1920s – Approximately 1/5 of the commercial properties on Hawthorne are constructed.

1927 – The Bagdad Theater, now a designated historic landmark, is constructed in the Mission/Spanish Colonial Revival Style.

1931 – The City widens Hawthorne from 46 feet to 52 feet from SE Water to SE 52nd Avenue to accommodate heavy vehicular traffic. Residents from SE 52nd to SE 55th successfully petition the City not to widen the street in their neighborhood.

1936 – A WPA project removes the streetcar rail on Hawthorne between SE 12th and SE 54th to create a solid, even finish for cars. This marks the end of the Streetcar Era on Hawthorne.

1930 to 1940 – Service stations and garages on Hawthorne Blvd. nearly triple. Both Fred Meyer and Safeway have stores located along Hawthorne, but they are no larger than an average neighborhood store. In the Sunnyside area, many homes are razed to make way for parking lots, especially near Belmont. Portland’s economy stagnates, along with the rest of the country’s but there is a proliferation of bars and taverns.

1941 – The U.S. enters WWII. Portland experiences a population and an economic boom.

1940s – With the decline of the streetcar, bus and mass transit use by working families increases sharply.

1951 – Fred Meyer opens a superstore on Hawthorne and SE 39th Ave. driving many smaller stores out of business.

1953 – There are more than a dozen restaurants and eateries on Hawthorne between SE 34th and SE 38th Avenues.