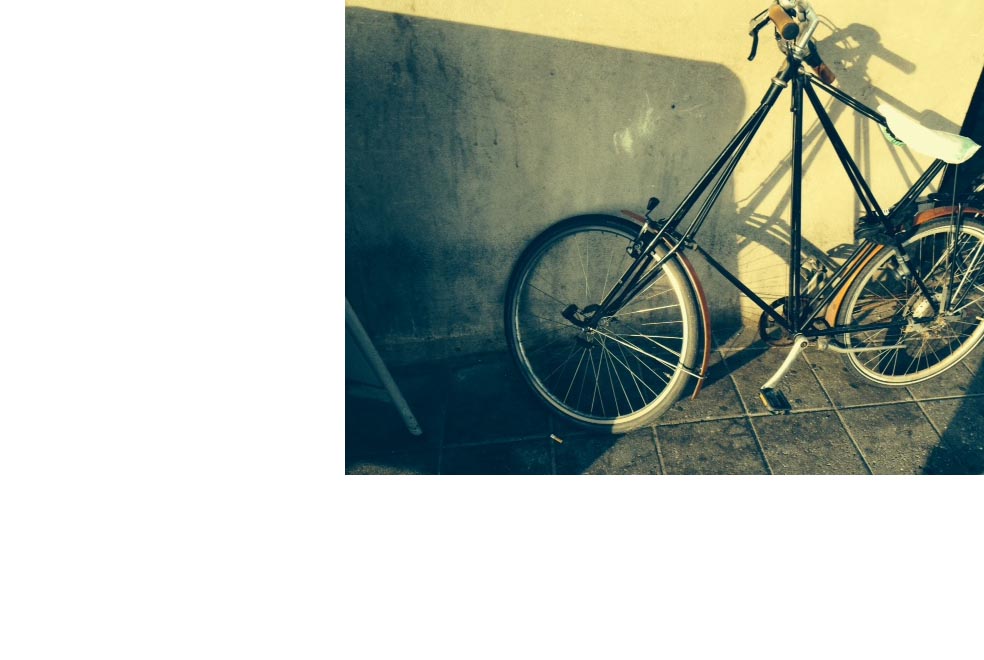 How to Ride a Bike in Copenhagen

Today’s post is by guest contributor Paul Loomans. Paul is a development professional involved in sustainability, community, and biking.  He is car-free in Phoenix Arizona.  Paul is COO of Firefly Living, a new generation real estate organization.  He also loves cats.

It was my last night in Copenhagen.

Over most of the past two weeks, I’d seen the world’s best biking city from the seat of a bike. Since I had gone car-free in Phoenix about three years ago, I figured it was time to visit Mecca for biking inspiration.

I stayed with four different Couch Surfing and Airbnb hosts, both urban and suburban. They generously lent me their bikes. I made some new friends, and visited some old ones.

I met Sara, a Copenhagen teen, working at a huge Fotex retailer/supermarket on that rainy Friday night. When I ask her for a couple words to summarize biking in Copenhagen, she says “Well, my bike is broken right now so not so good. But if I use my dad’s bike it’s pretty good for biking around here.” 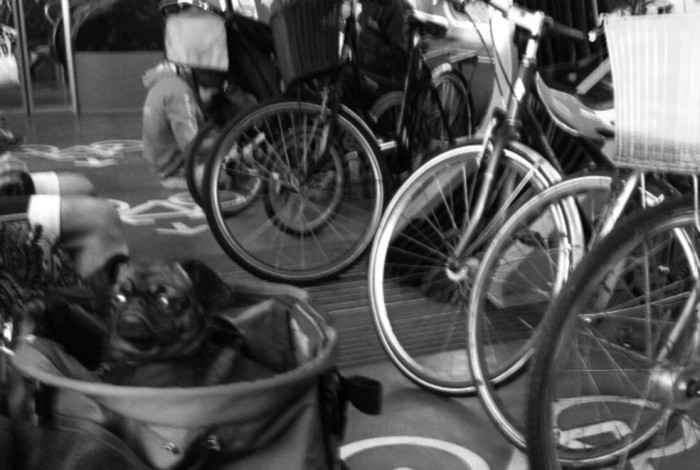 It’s an interesting trend I’ve seen here, that people talk about their bikes the way Phoenicians talk about their cars. There may have been bike advocates at one time here, but now there are just people on bikes, in one hell of a great city. The advocates may have grown into bureaucrats, and they seem to have done a great job.

For example, they have a great organization called the Cycling Embassy of Denmark. Now that’s classy.

Leaving Fotex, I walk out the door to find the rain has lessened, but the cold had not. I’m from Phoenix, so I was the only person wearing a thermal t-shirt. Some locals were in short sleeves. It’s about 9:30pm, and another crazy home grown cargo bike rolled past, about 10 feet long and steered from the rear, Gondola-style. Nothing fancy, with a faded coat of black paint and no branding at all. I picked out my bike among the thirty near the entrance, hopped on the bike lane, and rolled back home a bit early, since the next day I was flying back to Phoenix.

In Phoenix, we are always encouraging people to ride their bikes because you will see so much more. In Copenhagen, this has been overwhelming. Sincerely overwhelming. I was amazed by the ubiquitous nature of biking, and how it is just an accepted part of urban life. Pictures (I have seen and taken plenty) can not truly capture it. And I’m not sure that words can do it justice, without sounding like a zealot. As a part of the trip, I took photos with my iPhone and posted them for my Phoenix pals. But I felt that the biking was hard to capture. 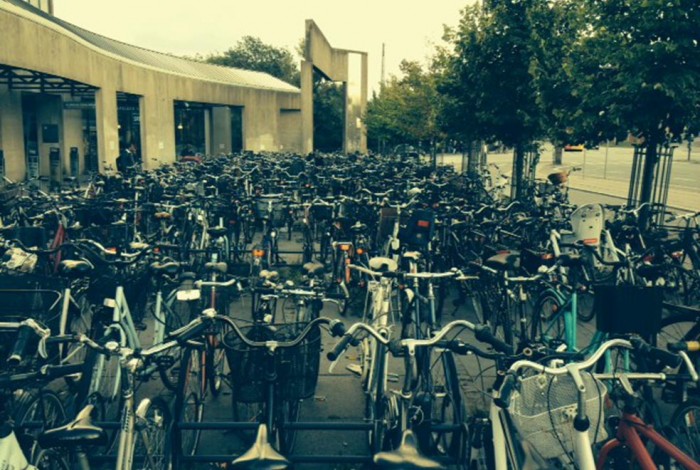 There is a wave of bikes that flow through the streets of this city each day, and it seems almost effortless to join in. I found that I had to know where I was going, or I most certainly would go well past my target. But it’s not a big problem…I would just raise my hand to signal that I was going to do something weird, and jump onto an alley or sidewalk when safe. The remedy is always fast and painless. Think of it as the biggest group ride you’ve ever taken, but almost completely silent. Over 40,000 bikes ride over the Knippelsbro bridge each day. So happy I was one of them!

Biking is a part of Copenhagen. Not bike culture…culture. Not Copenhagen Left…just left. Since I truly don’t know where to start, here are some thoughts and observations I had while here:

•    No matter where you walk out the door in Copenhagen, you can rightly expect to see a two-meter wide elevated bike lane. Normally, the bike lane is nestled between the sidewalk and the auto parking or traffic lanes. Bus passengers often enter and exit into the bike lanes, and bicycles yield to them. Sidewalks often are further identified by a different paving pattern, and the elevation between levels provides very effective protection for bikes. Intersections often have blue paint to identify and protect the path for bikes. 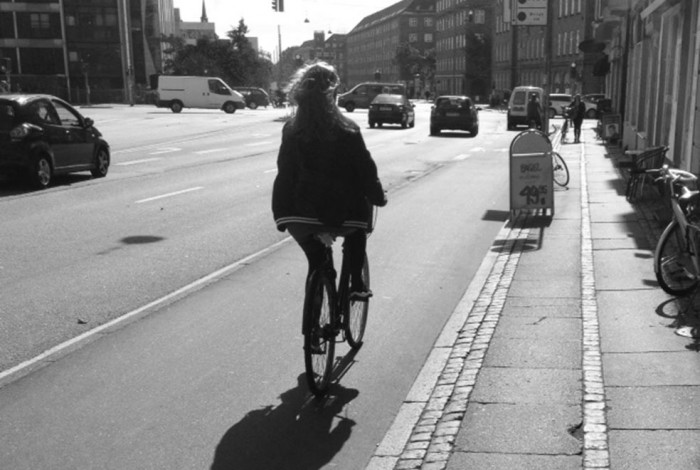 •    In normal riding, you do not see cars or pedestrians wandering in to the bike lane, and you can ride unimpeded, feeling totally safe. That is such a welcome change! Yet as a bicyclist you do want to be constantly aware of distracted pedestrians floating off the sidewalk, or faster bike traffic flowing by on the left. The average speed of bikes in CPH is about 16 kph, and at times you will have passing with 3 bikes abreast. I must emphasize that you have to pay constant attention when you ride here, but if you do, the experience is not stressful at all. From 2008 to 2012, the sense of safety among Copenhagen cyclists rose from 51 to 76%.

•    A huge part of the wow factor for me has been the quality of the bike  lanes. They are incredibly smooth, and maintained with diligence by the government services. They are monitored closely with dedicated equipment, and the results are evident every time you ride. And there are often drains, flush with the asphalt, well placed to avoid buildup of standing rain water. Copenhagen residents tell me that snow removal in bike lanes is the also number one priority when needed. 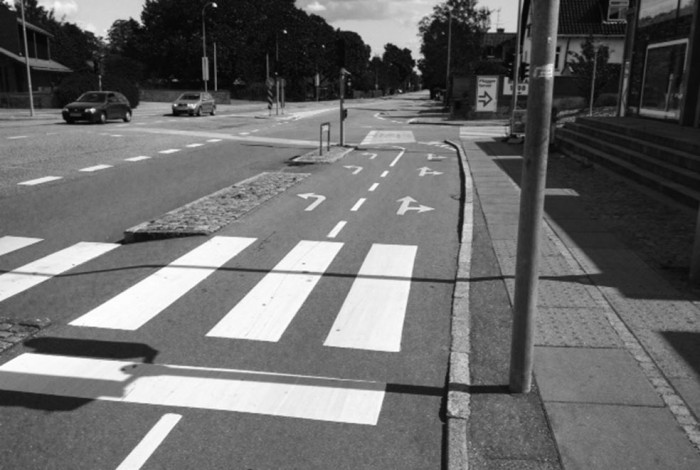 •    In the areas surrounding the City Center and high traffic areas, the other bike infrastructure and traffic signals are amazing. There is a network of lane markings and dedicated signals for bikes that simply blew me away. While a bit complicated, these are very easy to learn because all you have to do is mimic the bikes alongside you. Bike parking is plentiful, but less sophisticated, and in essence you can park your bike just about anywhere out of the way, using just a collar type lock: in other words, bike racks may hold a bike upright, but are usually not used to secure the lock. What a change from Phoenix. Bikes are rarely stolen in Copenhagen, and are often covered by insurance if they are. ! 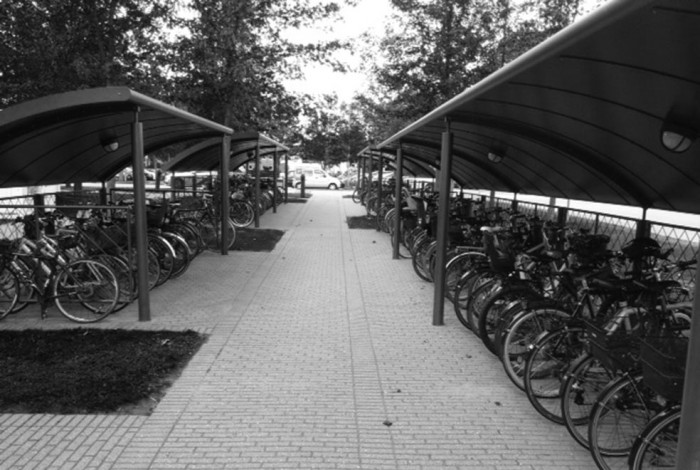 •    Bicycles in Copenhagen do not typically travel on the city bus or Metro system. But bikes ride for free on the S-train and Regional trains, which provide a super network for people living in the outskirts. Dedicated bike cars handle a heavy count of bike traffic. 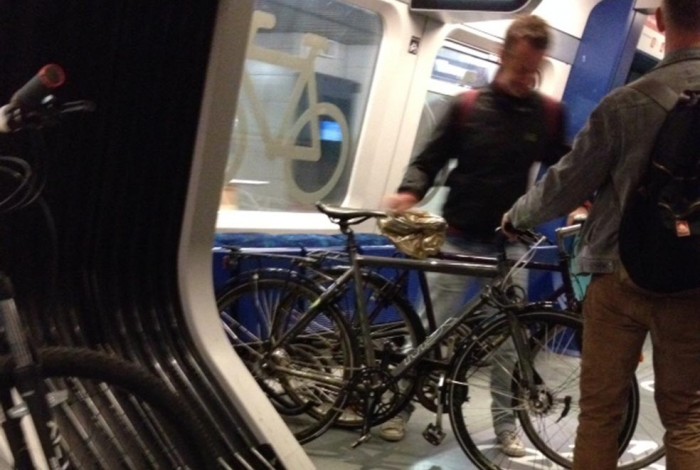 •    There is little fanfare to the bikes you see in Copenhagen, with a mixture of 80% various city bike brands, about 10-20% mountain/crossover style, and just a smattering of high end, high performance, high dollar brands like Trek and Specialized. Very few accessories like cup holders or water bottles (a must in Phoenix!) I did not see a Schwinn while in Copenhagen, and the Raleigh branded city bikes seen here are built in Denmark.

•    In recent years, there has been a governmental campaign for helmet use, and some pushback from the biking community. It’s a commonly debated topic. So you see regular use among children on bikes, and perhaps 20-30% of adult cyclists wearing helmets. It seems Nutcase has made some inroads here. I myself do not ride with a helmet, but certainly do not fault anyone for choosing to do so. The people wearing helmets seem to ride more aggressively than those who do not; it’s not scientific, but in two weeks here you see a really big sample.

• The interaction in Copenhagen between people and their bikes is unique, albeit very practical. Often, as a feature of multi-unit housing, an indoor bicycle storage area is featured — to provide better access to the street and protection from the elements. The storage appears to often be a mix of bikes, some locked and some unlocked. I was certainly impressed by the level of trust on this, but not surprised.

There was a bit of an epiphany on my trip. When I had a chance to speak with residents at length, I noted how often they were truly multi-modal. Biking was important to be sure, but for most in greater Copenhagen, the bus, S-train and metro systems all get significant shares of traffic. In 2012, 36% of trips to work or education in Copenhagen were on bicycle, with an additional 33% listing bus, train and metro. The transit system here is amazing, especially the S-trains. From a Central Station hub, these trains provide rapid access to almost all parts of greater Copenhagen. Running along six lines, there are almost 100 stations. And each train has at least one designated bike car. In my opinion, the development of these other modes of alternative transit has been just as important as the bike infrastructure. It is a foundation upon which this system could thrive. Multi-modal transit, with light rail expansion as a catalyst, likely played a role in the growth of bike use in Portland, for example, and may be vital to Phoenix as a biking city. 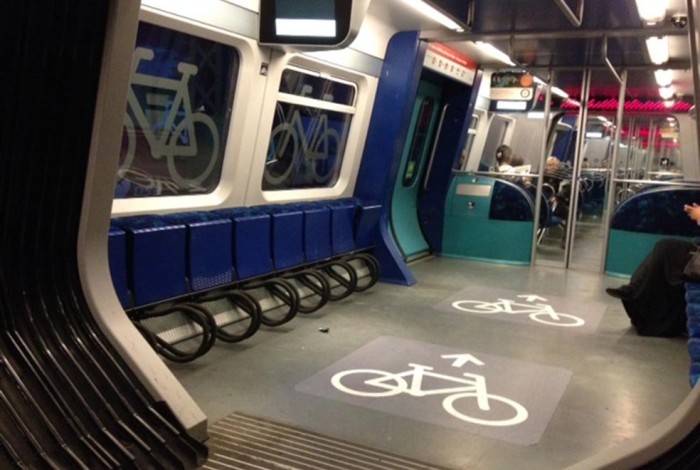 I know in my heart that Phoenix has this potential, with a sunny and dry climate unrivaled in Scandinavia or just about anywhere else. There is beautiful late night weather that begs for a bike ride. At home, we have a growing group of advocates for biking, named Phoenix Spokes People, that promotes the enhancement of biking as an alternative mode of transportation, and gathers people to have fun on bikes. We have a new Bicycle Master Plan in Phoenix, and are eager to see it funded and implemented.

But would it work? I look at Copenhagen and say, “can we get there from here?” Can we jump over expanded mass transit, and go directly to bikes?

Can we transition away from cars? How do we get to the point we can justify and build cool things like the Cycle Snake bridge? How long will it take?

The effects of overall culture on the bike culture in Copenhagen are difficult to relate to our situation at home. Most people in Copenhagen do not consider car ownership as a financial possibility, whereas here it is still a luxury very firmly rooted in the American Dream. The divide between rich and poor appears much less extreme in Denmark, due to a different model of taxation, education, health care and social welfare.

During my trip, I had the opportunity to stay a couple nights at the Airbnb (bed & bicycle!) of Mikael Colville-Andersen, a leading consultant and voice on the development of urban biking environments. I’d encourage you to follow his blog Copenhagenize.com, and just for fun you might also want to like his Facebook group The Slow Bicycle Movement. His consultation and speaking engagements take him all over the world now, and his skills as a film director and communicator have helped him shape the way many people think and talk about bikes. I’m definitely glad he’s around, and he lent me a cool red Jopo city bike while I stayed with him.

If you have travel plans to Copenhagen and need a bike to use, there are great people at Copenhagen Free Bike Rental with simple bikes to use for free up to three days. Pickup and drop off is convenient by the Town Hall, and next to a great art house cinema. 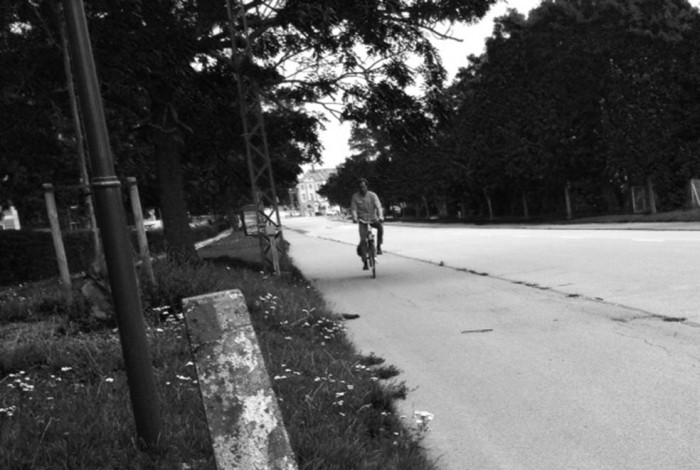 All around, it was a very special trip to Copenhagen. It’s easy to recount some of the things I saw, but tougher to communicate how they made me feel. In what’s recognized as one of the world’s happiest places, I might have been the happiest of all.

Photo Credit: All photos and video by the author.

Leave a Reply to Ed