“We need to look at infill as a piece of an existing puzzle rather than trying to create your own identity within an existing neighborhood and disregarding what’s around you. A good infill project is one that takes in what’s existing and also adds to it,” says Cavin Costello, co-founder and designer at The Ranch Mine. Costello and his partner Claire Costello prove these principles with their new infill residential project for developer Evan Boxwell of Boxwell Southwest, the LINK house, in the historic Pierson Place neighborhood in uptown Phoenix. The LINK house got its name because it was the last empty lot in the vicinity and therefore considered the final missing link to re-complete the neighborhood.

The approximately 2,000 sf house is the last to be built in a series of empty lots where the City of Phoenix had demolished existing homes in the early 1990s to make room for the Camelback and 7th Avenue Light Rail Park-n-Ride. But it turns out that those lots were never needed for parking and the resulting empty lots left gaping holes in the Pierson Place neighborhood. So the city decided to put out an RFP for developers to build new infill homes to stop those gaps, and that’s how Boxwell Southwest came to own three of the empty lots.

The LINK house is a ground-up spec house with three bedrooms and two baths on a small 8,000 sf lot. To fit a new project into a historic context of homes built between 1924 and 1956, Costello analyzed the existing houses in the neighborhood to find common threads. He found that the surrounding homes tended to have front projections and side extensions and so he added a modern interpretation of those elements into the LINK house. Plus, in keeping with the City of Phoenix historic preservation guidelines, Costello matched the height and width of the new house to the existing homes and made sure that it had a similar scale, massing and form.

But the LINK house doesn’t just reference the existing fabric, it adds a new and contemporary element to it as well. For example, The Ranch Mine chose an L-shaped floor plan to match some of the other houses in the neighborhood, but used that shape to create two distinct volumes – one that is private and one that is public. The public portion, which comprises of the living area, has a strong connection with the street and the private volume, such as the bedrooms and bath, is tucked away in the back.

Like in other Ranch Mine projects, the indoor-outdoor living concept plays a major role in the design of the LINK house. The front of the house sports 24-foot wide, 10-foot tall sliding glass doors that completely open up the living space to the front patio. 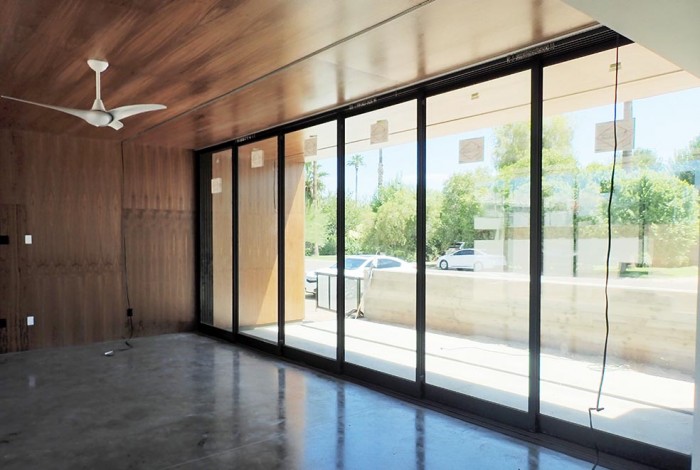 And the back of the living space opens up to the back patio.

“You can talk to the neighbors walking down the street on one side and look at the Light Rail and see the city on the other side,” says Costello. 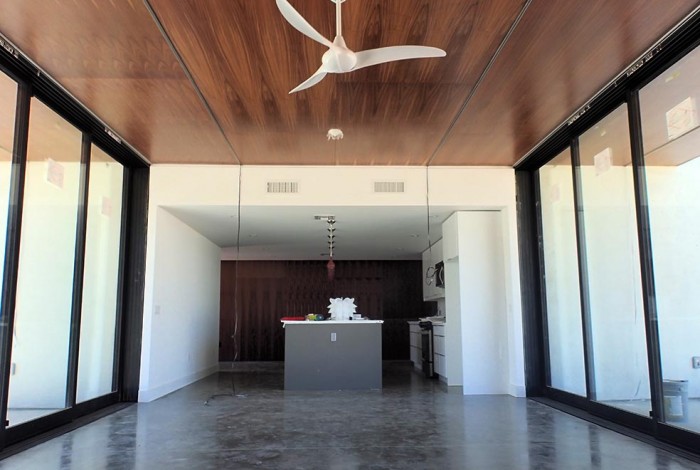 This opening of the house onto the outdoors is not only pleasant for the inhabitants of the house, but it also fosters neighborliness.

With all that light coming into the house from the giant windows on the north and south sides, the designer was able to avoid putting windows on the east and west parts of the house, where the most heat transfer would occur. Another passive solar strategy that The Ranch Mine employed was to design overhangs over the glazed north and south sides of the house precisely to let the sun in during the cooler months of November through April and keep the direct sun out during the hotter months.

Another important and foundational sustainability strategy at the LINK house is the use of the 24″ on center stud framing, or smart framing. This ensures minimal waste, dictates standard window sizes, is efficient for the truss layout, and is perfect for laying out plumbing and mechanical systems efficiently as well. In addition, the house has a tankless water heater, low-flow plumbing fixtures, LED lighting throughout, high-efficienty HVAC units, low solar heat gain glass, and thermally broken aluminum window frames. Plus, per City of Phoenix requirements, the house lot retains all of its storm water onsite. The design team was able to achieve this by adding two grassy retention areas in the front and back of the house, which also serve to cool the house, and by adding river rock to the west side of the house to absorb and drain incoming rain.

The house is built out of stucco on the exterior, in keeping with the materials of the neighborhood. But the wall of the front patio is made of board-formed cast-in-place concrete, adding a subtle contemporary twist to the materiality of the house. On the inside, the more public living area is clad in walnut panels and there is a beautiful barn door into the master bathroom made out of reclaimed wood. 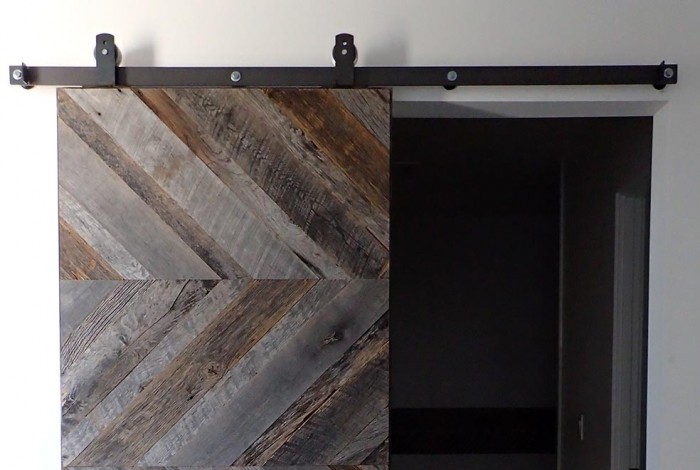 But overall, The Ranch Mine’s focus is not on flashy finishes but on “creating quality spaces and letting the inhabitant add interesting pieces of their own identity.”

Want to check out the LINK house in person? You’re in luck! The Ranch Mine and Boxwell Southwest are hosting an open house this Friday August 22, 2014 from 5pm to 7pm. The house is located on 518 W. Mariposa in Phoenix.

Photo Credit: All photos courtesy of The Ranch Mine.