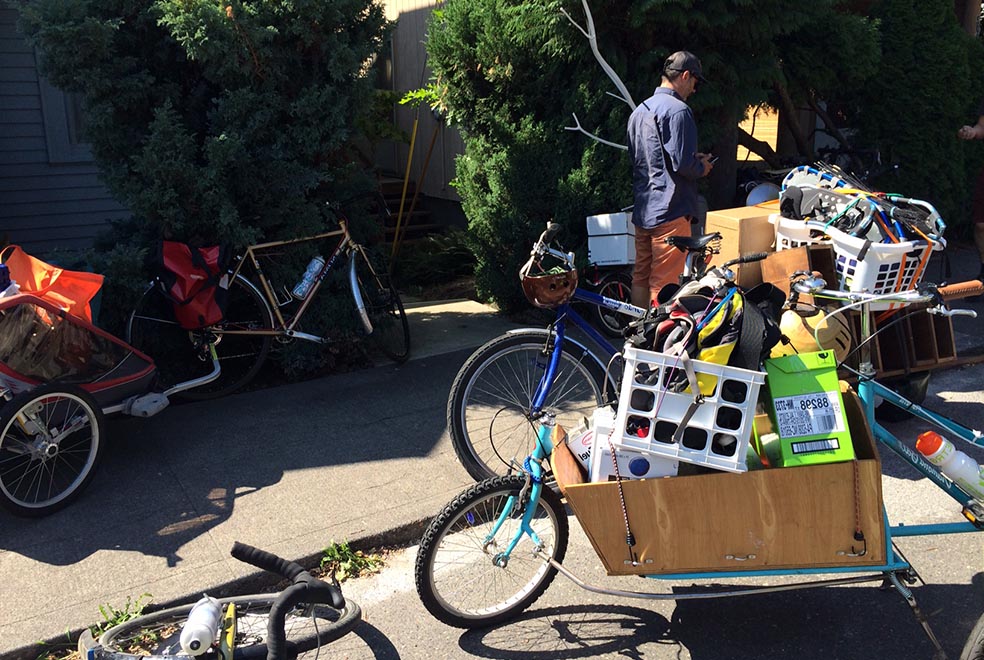 Similar to the notion of people who bike because they want to and people who bike because they have to, the person who is in the Bike Move #1 photo above is hauling stuff by bike because he has to. The person in Bike Move #2 photo is hauling stuff by bike because she wants to. The guy in Bike Move #1 would jump at an opportunity to move that stuff by car, but he’s moving it on his bike because he probably can’t afford a car. The person in Bike Move #2 has every opportunity to move that stuff with a car, but chooses not to for various reasons, including the sport of hauling things on your bike, having fun with friends during a bike move, community spirit, and being an example of doing difficult things like moving house without having to use greenhouse gas emitting vehicles.

This weekend I participated in my second bike move in Portland. It’s a very fun community experience where friends come and load stuff up on their bikes and bike trailers, haul them to your new house, unload, and then have a party. Bike moves are really great because yes, they keep you from having to move by truck, which harms the environment. And they are a great community-building event where people come together to help someone move. Plus, they can be very low-cost, though many bike moves are not because the person moving usually spends a bit of money to feed their bike movers before and after the move.

Bike moves started as a subversive act towards the main stream addiction to motor vehicles. They prove that we don’t need cars as much as we think we do and that even something like moving a whole household can be done on bike. This idealistic and worthy motivation has led to bike moves becoming more and more prevalent, but only within a very specific segment of the population.

From what I have seen so far, bike moves in Portland happen mostly within a small group of bikey people that is usually white, privileged and relatively well off (they can afford a moving truck). If they are not wealthy, they are educated and have knowledge of and access to community resources that can help them. Bike moves are still a very very small percentage of all moves in Portland, and they are even unusual within the wider bike scene. Most people and even many who bicycle have probably never heard of bike moves, much less participated in one.

The unfortunate thing is is that while they have retained their environmental and community benefits, bike moves have become stuck on the level of being moving parties for bikey people who like the sport of hauling things on their bikes. They could be so much more! In addition to the party, sporty, eco-friendly, semi-hippy, subversive feel of bike moves, there could be a whole social justice dimension to them that is currently missing.

Instead of being satisfied by the notion of sticking it to the man by moving by bike, perhaps we need to take bike moving to another level and do them for people who actually need to move by bike – for those who can’t afford a moving truck. Like refugees who come here with very little and who don’t have the resources or even a community to rely on to help them move, or low-income families who have to move often but can’t afford to rent a car, much less a moving truck. There are so many people in our cities that could actually benefit greatly from people with bike trailers helping them move.

We need to start looking at the larger context within which bike moves happen. Yes, the environmental, community and DIY empowerment benefits of bike moves are valid and good, but most of these benefits are currently being afforded to people with privilege and power. People who don’t know where their next meal is coming from or how they’re going to pay rent rarely have time to think about the environment and so bike moving is not even on their radar, even though it could be a low-cost option for them, not to mention that many low-income minorities and immigrants have a stigma against bicycles as status symbols of being poor. The irony is that bike moves are a great solution for the low-income population, much like bicycles in general are. But like in bicycle advocacy, bike moves are generally targeted to a certain population that is already privileged and hence completely miss out on the population that could most greatly benefit from them.

Should people stop doing bike moves? No! We should do more bike moves, not less! Both privileged people and underprivileged people should participate in bike moves because they are a fun, environmentally-friendly, empowering, low-cost and human-powered endeavor that brings people together. And it is wonderful that a certain group of bike advocates has incubated the idea of bike moves. But the time has come to expand the idea to a wider segment of the population where it can be truly useful and a solution to people’s problems, instead of merely a symbol of what’s possible.

Tags: bike moves, equity, portland
« How to Ride a Bike in Copenhagen  |  Bicycling’s Racist, Sexist and Classist Beginnings and How They Impact Bicycling Today »