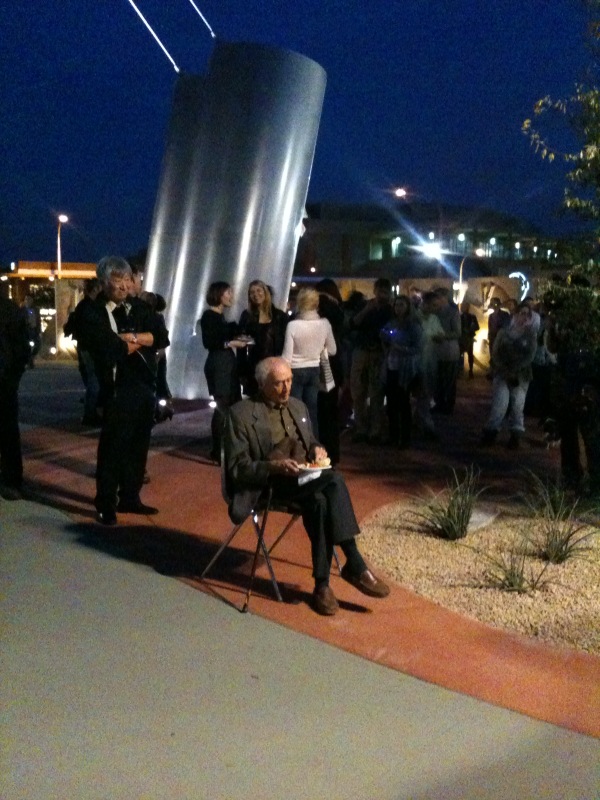 What Would Paolo Soleri Do?

“The mechanisms channeling life positively may consist of the replacement of comfort and security by joy.” – Paolo Soleri in his book Arcology: The City in the Image of Man

This weekend was the public dedication of the bridge designed by Paolo Soleri in Scottsdale on the Waterfront.  I attended a special VIP reception before the public dedication and snapped a photo of the man himself.  The next day, I attended a lecture on Organic Architecture by Alan Hess and a panel discussion on Soleri’s Principles in Action that included Will Bruder, John Munier, Jeffrey Stein and Peter Zweig, all brilliant architects and thinkers in their own right.

I was so impressed by how these contemporary architects have been fundamentally influenced and moved by Soleri that I decided to dig a little deeper into Soleri’s work and theories.  I got my hands on his seminal book, Arcology: The City in the Image of Man and frankly it’s rocked my world!

Now 92, Soleri has always been a man ahead of his time.  He first published this book in 1969 and warned us that “One by one, in the short time of two, three generations, ecologies, fruit of eons of refinements, are destroyed.  The degree of destruction seems to be in direct proportion to the amount of wealth or power; thus the dismal forecast of even greater destruction.”  He’s right of course.  We’ve only gotten wealthier and more powerful since 1969 and yes, we’ve destroyed the earth, “the fruit of eons of refinements”, while we’ve been at it.  All this seems more poignant than ever since our wealth seems to have dwindled because of the recent economic catastrophe, but the destruction remains.

Here’s the main thing you need to know about Soleri.  He HATES suburbia.  He calls it “megalopoly” and “flat gigantism”.  He blames sprawl for a lot of the environmental an social destruction that he predicted and we now find ourselves in.  His solution to haphazard suburbanism is to “miniaturize or die”.  The way he proposes to achieve this is to go vertical.  He has a name for this kind of architecture and urban planning and it is arcology – the merger of ecology and architecture.

Soleri’s sketch, the “Map of Despair” sums up the concept pretty well.  On the left is the Ecumenopoly (pay no attention to the alien names he gives to things), which shows how things are now, or rather how things were in 1969 (the bubbles would be much smaller now no doubt).   The bubbles represent the open natural spaces that are leftover from all the cities and suburbs in the country.

The map on the right represents Soleri’s theory of Arcology.  As you can see, in Arcology, most of the map is white, which means most of the country is made up of pristine, natural, open land.  The lines you see are “urban rivers whose core would serve for transportation and communication”. 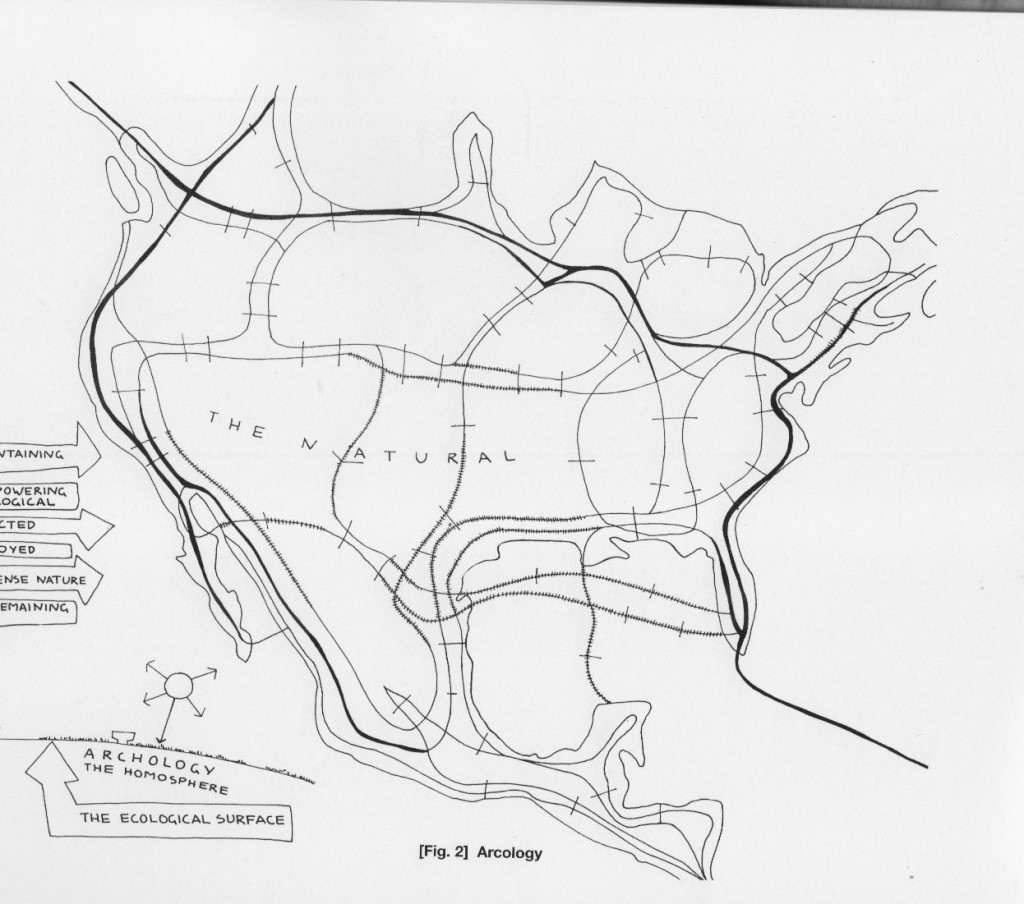 The Map of Arcology

These urban rivers would connect large modular cities, cities that don’t just spread out on the earth horizontally, but cities that have a miniaturized footprint, and in fact go up not out.  Here’s an example of an Arcology:

A three-dimensional city, an arcology

Soleri’s nature-based term for the connectors between cities, “urban rivers”, is not an accidental one.  In his view, his modular cities and the urban rivers that connect them are very much based on natural systems. In fact, they contribute to the vitality of nature that surrounds them instead of sucking it dry, like most current developments around the world do.

Remember that Soleri was based here in Scottsdale when he wrote this book.  He was very much aware of what was happening with Phoenix and how it was becoming this gigantic, sprawling city growing like a cancer over the revered desert.  It seems as if his Arcology theory might have sprung out of the way Phoenix was developing at the time, which was a car-centric model continually bursting at the seams, growing ad infinitum.

On a side note, the venerable reverse lanes were put in place in the seventies, not too long after Soleri warned us about the city’s car culture.  The theory behind the reverse lanes was to move traffic swiftly from Downtown to the northern suburbs without the use of a highway.  The movement of cars was and is favored over street life, walkability, bike-ability and the human scale on the 7s – a terrific example of complete disregard for Soleri’s prescient warnings about suburbia and the car.

It may be easy to dismiss Soleri as an unrealistic dreamer.  But that’s an easy way out for ourselves now isn’t it?  Soleri has been pointing out the flaws and the terrifying consequences of sprawl, suburbia and the car-culture for over fifty years now.  And what have we done?  We keep expanding our highways, tear down buildings to put up parking lots and continue to worship the car in countless ways.  Plus, we’ve continued to build further and further out.  This particular habit may have been derailed due to our atrophied economy, but I fear that builders are just waiting for the economy to bounce back so they can go back to their sprawling ways.  And unfortunately, these builders seem to have the support of our political leaders.

Sure, we’re not going to have Arcologies in our midst any time soon.  But at the same time, let us not be foolish and keep ignoring what Paolo Soleri has been shouting for decades now –  that we obviously cannot keep growing out, that suburbia simply doesn’t work, and that the car is slowly destroying our planet.  Hopefully the disruption caused by  our economic downturn has been enough to wake us out of our delusion and has startled us into paying attention to luminaries like Soleri.

Photo Credit: Paolo Soleri on Friday night sitting on his bridge on the Waterfront. Photo by the author.

Image Credit:  All images scanned directly from Soleri’s book Arcology: The City in the Image of Man.  If you’d like to buy this book from the Arcosanti bookstore, click here.