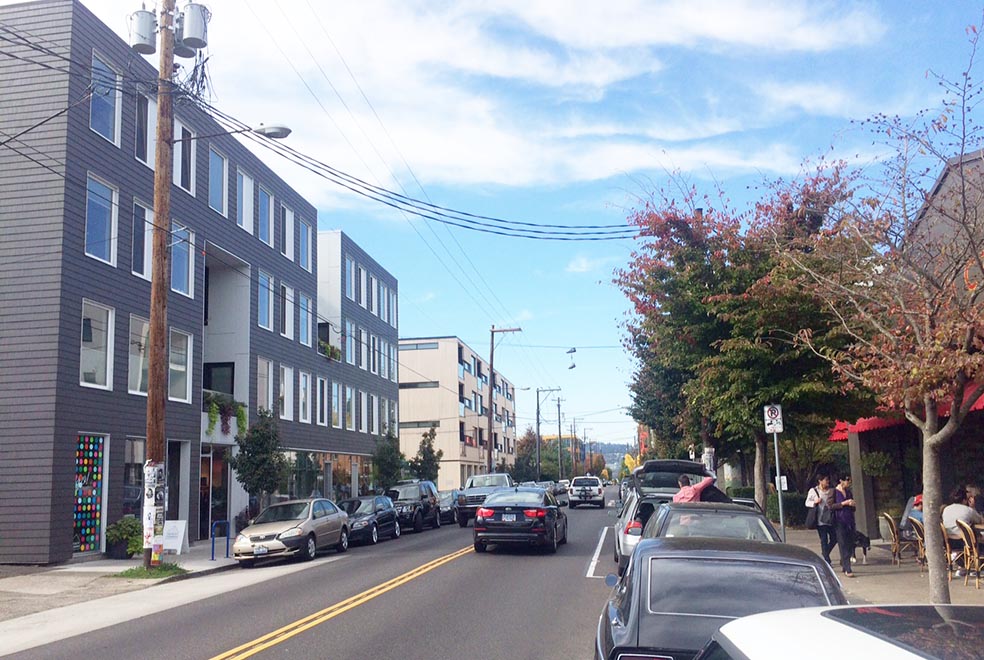 Portland Mayor Charlie Hales has declared a state of emergency for housing and homelessness in the city. With a vacancy rate of 2.5-3.2%, less than half of that in a healthy housing market, and a 30% increase in rents in that last 5 years, it certainly feels like a state of emergency to everyone from the homeless to the working poor to artists and even to middle class professionals.

Density was the dominant topic at the forum. Everyone on the panel was advocating for more density, even though many long time residents often bristle at the idea of adding density in their neighborhoods. “As long as there are people sleeping on the streets, let’s build to the sky,” said Bayer.

Spevak said a possible solution to adding density in a way that is more welcome by single-family neighborhoods is to “bring back the housing types that people already love.” He said creating zoning that would legalize small multifamily developments, like duplexes, triplexes and fourplexes would help had density to the city while maintaing the scale and character of single family neighborhoods. Currently, with R5 zoning that spreads over most of single-family Portland, it is not permited to build more that one unit on less than 5,000 sf.

Spevak also pointed out that the least expensive housing you can viably build as a developer will cost at least $100k, and the next alternative to that is living in a tent. There is a huge gap between these two scenarios that could be filled with options for people of lesser means, such as legalizing living in Accessory Dwelling Units on wheels in people’s back yards.

When Creager asked about the conundrum of preserving the character of Portland that everyone here is moving here for and at the same time creating enough housing for those droves of people, the panel encouraged a long view of the problem. McLellan defended the proliferation of 4-6 story condo buildings that are springing up on various commercial corridors in Portland, saying that “in the long term, the wave of these buildings will not change the character, but become part of it.”

Spevak echoed her sentiment saying that we ought to be skeptical of the “immaculate conception” model of development, referring to Daniel Hertz’s recent article on the City Observatory online journal. For example, talking about the bungalow homes that are so beloved now, “many of the arbiters of taste at the Seattle Magazines of the bungalow era believed those new bungalow neighborhoods “ruined” the character of the places they were built, just as new apartment buildings are maligned today,” says Hertz. And so may go the mid rises we are seeing pop up in neighborhoods. They may also become a beloved part of Portland’s urban fabric in ten or twenty years, said Spevak.

Bayer was very clear on his take on the importance of preserving the character of Portland neighborhoods. “There’s no use preserving neighborhoods when there are tens of thousands of people of color that can’t afford to live there. You can’t have a great neighborhood without a great diversity of people living in that neighborhood,” he said. Bayer’s comment put the “character preservation” debate in terms of economic privilege and race.

Racial discrimination has shaped what are now beloved historic neighborhoods. Redlining, where people of color could only legally buy homes in designated areas,  was a widespread and entrenched practice in Portland that was officially overturned in 1948, but lived on unofficially in real estate transactions for decades after. In effect, many of Portland’s quaint historic neighborhoods were developed to be available only to white people. More disturbing than the history is that the result of white-only neighborhoods is still in play today. Gentrification has pushed out people of color, such a the African American communities from North and Northeast Portland, to the outer reaches of Portland, which tend to be less livable. In an analysis of a 2010 census, The Oregonian reports that “The city core didn’t become whiter simply because lots of white residents moved in, the data show. Nearly 10,000 people of color, mostly African Americans, also moved out. And those who left didn’t move to nicer areas. Pushed out by gentrification, most settled on the city’s eastern edges, according to the census data, where the sidewalks, grocery stores and parks grow sparse, and access to public transit is limited.”

Bayer’s comment broke open the housing conversation to the underlying racial inequity issue in Portland that is always in the background (and often in the foreground) but is rarely acknowledged. What is the point of beautiful, walkable, tree-lined streets full of historic homes when these neighborhoods remain accessible to mostly wealthy white people? Perhaps, Bayer implied, we should be looking at the growing and more urgent problem of inequality in Portland, before focusing on the idea of preserving the physical fabric of historic neighborhoods for the privileged few that have access to them.

City Club will host the second part of the Affordable Housing Forum next Friday, October 9. On the panel will be Bing Sheldon, founder of SERA Architects and Brandon Spencer-Hartle, director of Restore Oregon. It will be moderated by land use attorney Carrie Richter.