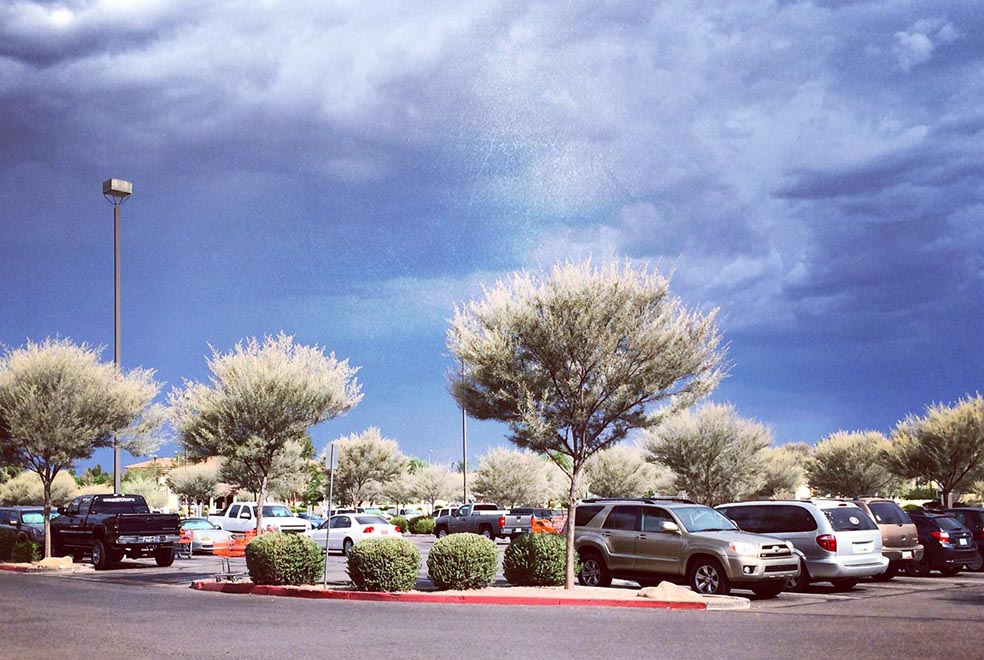 I just spent more than two weeks now in the suburb of Chandler, Arizona. As far as suburbs go, it’s not bad. It’s actually considered an “inner ring” suburb, at a whopping 25 miles from downtown Phoenix, which is a testament to how sprawling Phoenix metro really is.

Every time I spend time in the suburbs, I am reminded of why I live in the city. Suburbia is like Wonder Bread – bland, easily digestible, convenient, but really it offers little in terms of nutrition for the soul.

Here are 10 reasons why:

1. Everything looks the same. Perhaps suburbanites find comfort in predictability. Perhaps there is a sense of safety that comes with everything being a strip mall or a big box store. But for a city lover like me, I am starved for character and a sense of place because every intersection, every commercial node and every residential development looks the same. There are no surprises in the suburbs and that’s not a good thing.

2. You HAVE TO drive everywhere. The suburbs grew up around the car, especially here in Phoenix, which is a post WWII metropolis. As such, you simply HAVE TO drive everywhere, whether if it’s to get groceries, to go to the bank, to go to the doctor, or even to go for a walk in the park. You really have no other option, either because things are too far apart to walk, it’s too dangerous to bike, or because transit is really bad. Even the city centers of the suburbs are ridiculously unwalkable and car-centric. My parents house is close to downtown Chandler which is walkable for maybe a quarter of a mile, but is largely still extremely car-centric with wide streets, large parking lots and cars whooshing by.

3. You get no exercise. The only way to get any exercise in the suburbs is to go to the gym. When I lived in the suburb of Mesa some years ago, I thought that going to the gym really was the only way to get exercise. But now that I live in Portland without a car, I see that I can get exercise as part of my daily life when I walk home from the grocery store carrying two heavy bags of groceries or when I bike to a friends house many hills away or when I walk home from the bus stop. Getting exercise in the suburbs means having a membership to the gym, which is cost prohibitive to some and simply untenable due to time and interest for others. Livability, something the suburbs severely lack, is extremely important to public health as it integrates exercise, movement and social connection into daily life.

4. You look like a freak walking on the street. Nobody walks in the suburbs unless they’re on a treadmill inside a gyn. It’s as if the sidewalks are just for show. I had first hand experience with this walking on the main street near my parents’ house in Chandler. I felt very out of place and lonely as a pedestrian on a street clearly designed with only cars in mind and pedestrians and cyclists as a formality that was legislated by politicians giving lip service to livability.

5. Everything is a little lamer. People aren’t willing to be very cutting edge in the suburbs. That’s why they’re havens for the tried and true – like chain restaurants and chain big box stores. Funky and unique businesses, cool art and interesting discourse is hard to find in the suburbs.

6. It’s too manicured. Like Wonder Bread with it’s clean edges and precise thickness, the suburbs are far too manicured and “perfect”. With not a twig out of place and sidewalks that have never been walked on, the suburbs have an air of superficiality.  Maybe the extreme control over their environment makes people feel like they are wealthier and that they live in an upscale part of town. But life and nature and human expression is messy. And when you get rid of the mess, you get rid of the humanity along with it.

7. It’s really far from where the interesting things are happening. The whole point of suburbs is that they are away from the busy, dirty and stressful city center. But the city center is also where all the interesting things to do happen to be. And usually, the city center is the business, sports and arts and culture center of town too. So when you live in a bedroom community that doesn’t have much going on, like many suburbs, you end up having to drive for miles and miles just to go watch a great show or watch a live basketball game.

8. It’s impossible to live locally unless you’re willing to be really bored. Where I live in Portland, I don’t have to go far from my neighborhood to get everything I need, including necessities like groceries, banking and the clinic and including the things I like, like enjoying wonderful local restaurants and coffee shops, going to the movies, going to art shows and music shows and the park. I can walk to all those things easily. But in the suburbs, it’s impossible to live a full and vibrant life locally. You have to drive a long way to go to the museum, or to an art gallery and even to go to the movies. And sadly, you usually have to drive some ways to get to a grocery store.

10. There are no people on the streets. Everyone is either in their cars or in buildings. No one is on the streets. So the environment looks abandoned, as if no one really lives there. The only “public” spaces where you will see people are the malls. But the malls aren’t really public, they are geared to make people buy stuff. Living in the suburbs is an oddly lonely experience because you rarely see people out in the public realm.