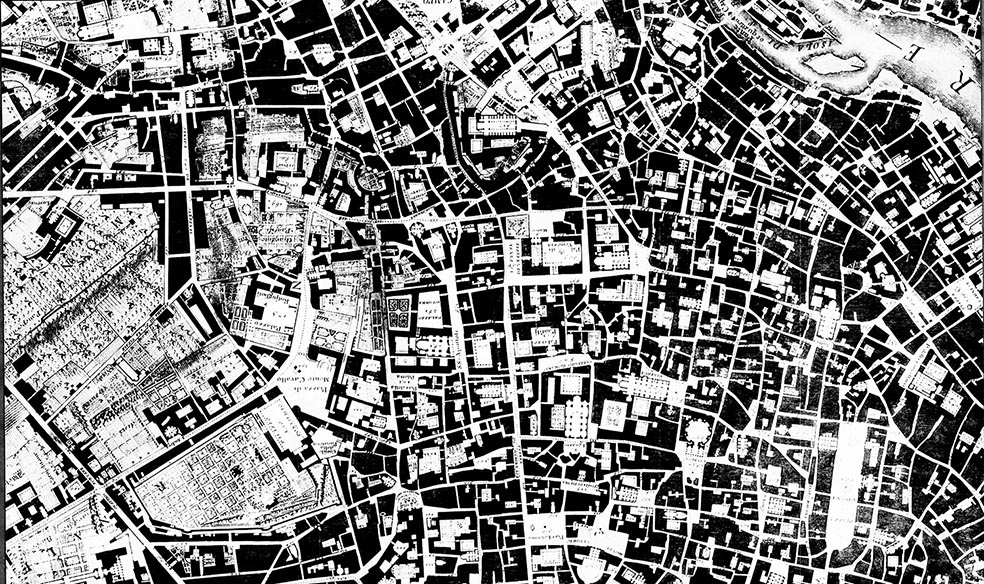 This is the fifth installment of the Livability 101 Series.

A Nolli Plan is a figure/ground representation of the city. It depicts the figure as white and the ground as black, allowing you to immediately visualize the relationship between, say buildings and open space. The most famous Nolli Plan is that of Rome, captured in the lead photograph.

I’ve been staying in the Phoenix suburb of Chandler on and off this past year, visiting my parents. Every time, the enormous distances between destinations, the wide roads and the sea of parking in front of every shopping center strike me as a terrible use of precious land. It seems like the suburbs give a lot of land away in the service of the car – in the form of highway-width roads and huge parking lots.

I made some quick and rough Nolli Plans of three areas of Chandler to depict how much land is dedicated to pavement – either as parking or roads. In my Nolli Plan – I don’t depict roads and pavement (all part of the built environment) as white, because if I did, the entire image would be white. Instead, I depict buildings as white and pavement as black.

Nolli Plan of the strip mall along Chandler Blvd, near the 101 Freeway. Scale: 1 inch=500 feet 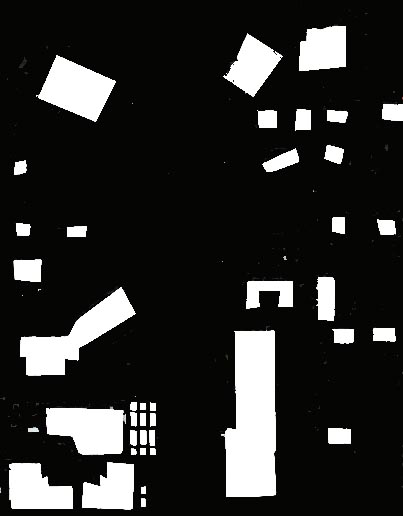 Nolli Plan of the retail complex surrounding Ray Road and the I-10 Freeway. Scale: 1 inch = 500 feet

These plans are meant to show what sprawl means visually – buildings are few and far between and what fills the gap is not open, green space, but black pavement for cars to drive or park on. Instead of a coherent, human-scaled city fabric, the suburbs are disconnected nodes of big box retail surrounded by huge swaths of parking. At the scale of these Nolli Plans, the human is but a speck. The built form of the suburbs doesn’t register on the human scale, but does on the car-scale. This translates into real life when walking or biking in the areas I’ve depicted is unpleasant, unsafe and unadvisable, if not impossible. Human interactions hardly ever happen on the roads (unless you count road rage), but is relegated to consumer interactions inside the retail establishments in the big box stores.

Though many find the suburbs to be extremely convenient, are they actually livable? Not according to this definition:

You definitely have to get into your car to participate and engage in the environments depicted above. The sheer distances of these places from actual neighborhoods makes it impossible to walk to them. Biking to these places is a little more feasible, though navigating through a sea of parking, very little bike parking or bike lanes make it an unadvisable task. Transit is an option, though transit in this region means waiting for the bus at least 20 minutes to 45 minutes between buses. And of course, buses don’t drop you at the door of Best Buy or Macaroni Grill, you still have to walk through hundreds of feet of parking to get to your destination. Walking can be wonderful, but walking through parking lots is a rather miserable experience. It is all but impossible for families and individuals to live in Chandler without a car, making this suburb extremely unlivable.