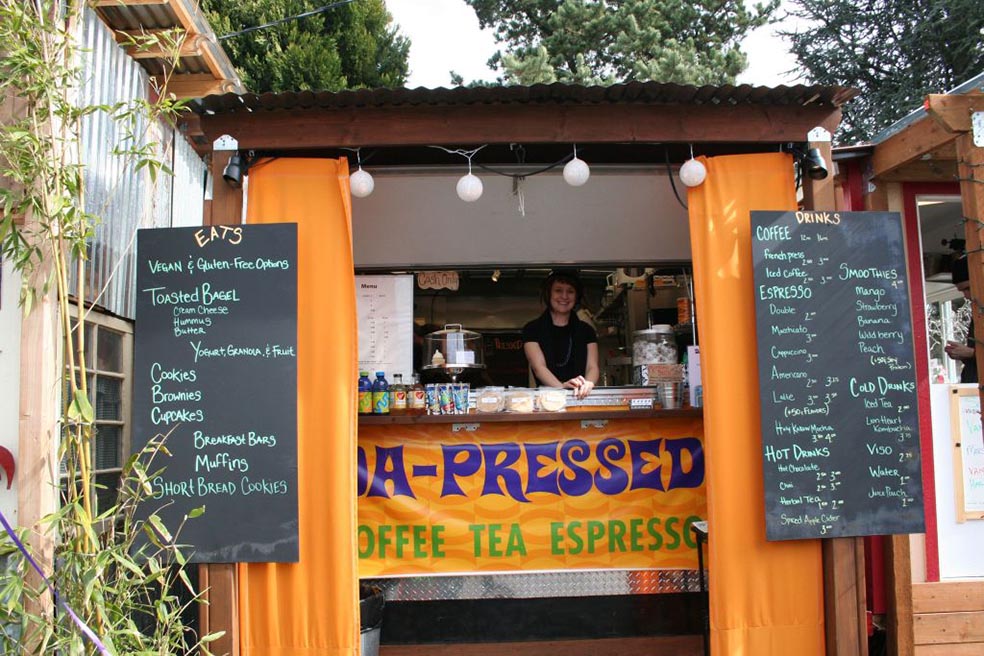 What We Lose When We Lose a Food Cart Pod

Portland is the birthplace of the food cart pod,  a cluster of food carts on an empty lot, usually a parking lot. Food cart pods have become a fixture in the city and new ones seem to be popping up all the time. But more and more, as the development craze is taking over neighborhoods, old and established food cart pods are disappearing too.

It’s true that the whole premise of food carts is that they are temporary. Food carts are often used to revitalize a barren empty lot. In a way, they are a victim of their own success. Once they’ve brought life and prosperity to a lot, they make way for new development that ultimately displaces them. The new development often comes in the form of a mixed-use 4 to 5 story building with relatively expensive housing above and relatively expensive retail on the first floor. Meanwhile, what happens to the community, vibrancy and creative entrepreneurship that is fostered by food carts?

One of my favorite pods in Portland is the Good Food Here pod on Belmont and SE 43rd. But I heard that even this well-established and excellent pod is on its way out to make room for new development. According to the Statesmen Journal, “the Good Food Here pod on Southeast Belmont is under a sale contract. Eric Cress, principal and current owner of Urban Development Partners, confirmed the contract but said complications have left the deal uncertain. If it goes through, he said, nothing would change until at least the fall.” Even though I know intellectually that something like this was bound to happen at some point because that lot is entirely too valuable on the commercial corridor of Belmont, it doesn’t diminish the loss.

The general plan in Portland is to add density to the city by developing 4 to 6 story housing along commercial corridors. But on the ground, this dense housing is being added at the cost of the existing character, affordability, communities and amenities along those corridors. Even though many feel that food carts are the least of the victims of gentrification, my heart breaks at the thought of losing the Good Food Here pod on Belmont because it is such a great amenity to the neighborhood.

I’ve gone to this pod enough to have favorite foods and to get to know the operators of the carts. It’s always nice to see that whatever time of day I go – whether for lunch or dinner, the pod is bustling with people. The pod is home to quality carts that attract customers from all over the city including Namu, Timbers Doghouse PDX, The Fish Box, and Viking Soul Food, which sadly recently closed its doors. I will sorely miss this wonderful pod when it’s displaced by another 5-story modern building with high end businesses on the bottom and high end housing on the top.

Here is what food cart pods have to offer that is hard to recreate:

1. Incubator space: Food cart pods give entrepreneurs who don’t have enough capital to open a restaurant a chance to ply their wares in a low-overhead way. Some chefs start off with food carts and when they find success, they venture onto opening more permanent locations. For example, Lardo had a food cart at Good Food Here and now they have 2 wildly successful bricks and mortar locations.

3. Community: Food cart pods are community hubs. They are magnets for people to stop, take a load of and get something to eat and drink. And there is something about interacting with a food cart operator which is a lot more personal than ordering food from a server at a restaurant. You feel a lot closer to the food cart operator and the food they sell. These personal, high-touch interactions makes for a down-to-earth and communal atmosphere which lend to customers starting up conversations among themselves as well.

4. Affordability: While there are some food carts that can be spendy, the food at food carts tends to be much cheaper for equivalent food from brick and mortar restaurants. With lower overhead costs, food carts can keep their costs low.

5. Accessibility: Because food carts are more affordable, they are more accessible to a larger group of people. And because food carts are usually surrounded by open space, they are inviting to the public, as opposed to restaurants, which are more exclusive. Plus, food carts are often a little bit beat up and sometimes have a build it yourself feel and if they offer seating at all, it’s just wood benches or vintage stools around an old table. This lack of pretension makes them highly approachable and accessible for a large number of people.

6. More options: Food carts simply offer another option to eating out – a more down to earth, affordable and rough around the edges option than eating out at a restaurant.

7. Dining al-fresco: Food carts are a great way to spend time outside. They are wonderful during the summer in Portland but they’re also fun in not-so-good weather, if you can find shelter from the rain to devour your kimchee and rice or seafood gumbo, or sweet tater tots.

8. A testament to the human spirit: Food cart pods are bustling and vibrant and successful nodes in the city that operate on a grassroots level, without the aid of large corporations, developers and government action. They are a testament to the creativity of individual entrepreneurs and to the commitment of the local community to support small, inventive and scrappy businesses.

9. Livability: It’s rare to drive to a food cart pod. The original food carts in downtown Portland are designed to be walked to. And even the food cart pods spread throughout the rest of Portland are pedestrian-oriented, human scaled establishments. Rodgers and Roy note that “it’s fair to say that the food carts both stem from Portland’s famed livability and contribute to it, forming a virtuous cycle of sorts.”

Because food carts usually sit on private property in Portland, it is all but impossible to guarantee that they will always be around. Property owners may be lured by promises of mega profits once the economy becomes amenable to development. And now that Portland is seeing a burst in demand for housing, more and more food carts are being displaced. The irony is that the food cart scene in Portland is part of the reason a lot of people are moving here. But to house the new population, food cart pods are having to relocate or disappear entirely.

So what’s the solution? How can we keep the grassroots, organic, community-oriented, human-scaled food carts around in this age of new development gobbling up more and more space in the city? There are some lots in the city that are undevelopable – either because of their odd shape, or because of contamination or other issues. These would be great for food cart pods. Another solution is to have food carts in the right of way, or sidewalks or public spaces. A more radical solution would be to close off a piece of road to cars and make it into a food cart pod. But even without these ideas, chances are food cart pods aren’t going to go away all together as long as there are empty lots and enterprising people in the city.

How do you propose we keep food carts as a vital and integral part of the city fabric?

Tags: development boom, displacement, food cart pods, gentrification, good food here, portland
« Subversive Transportation: A History of Women Cyclists and How Women Cyclists Can Save the Planet Today  |  Sustainability According to the Haves and the Have Nots »