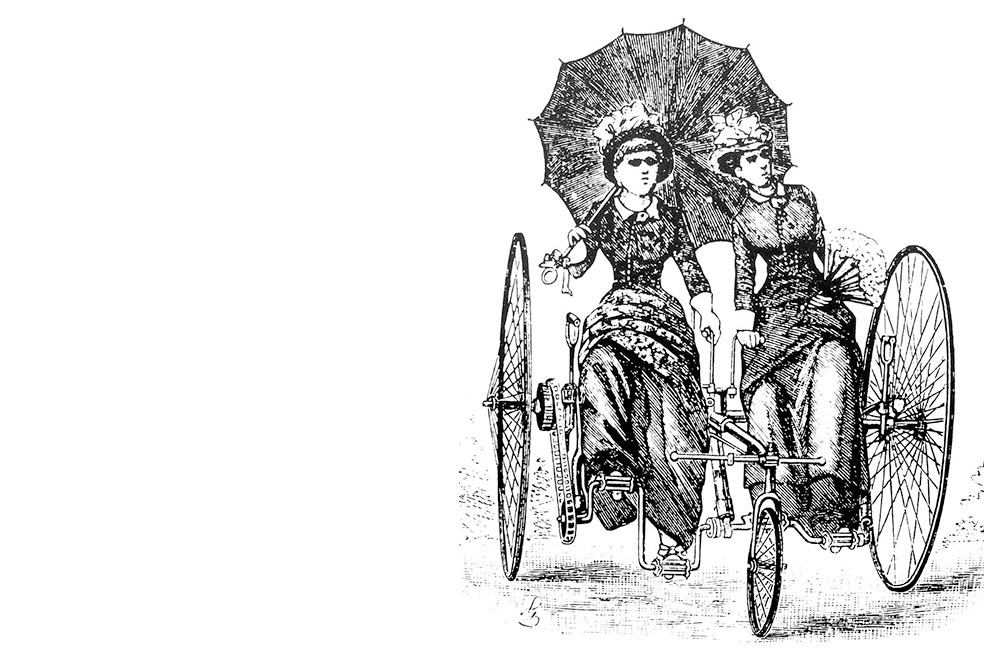 Not unlike women in Saudi Arabia that are banned from riding their bikes in public today, at one time women in the US faced the same kind of resistance to biking as well. The first drop frame bicycles to make it easier for women in skirts to ride came about in the 1890s. But at the same time, male doctors decried the overexertion to delicate female constitutions that was caused by bicycling. And women who rode bikes were often depicted as a little bit crazy and wild. Bicycles were even accused of deflowering younger women, causing spontaneous orgasms, encouraging loose behavior, and rendering women unfit for childbearing. All of these reasons probably resonate with the Saudi religious police today.

Women and the invention of bicycles

Women took to the bicycle almost immediately after it was invented. In 1816, the predecessor to the bike – the “draisine” was invented by Baron Karl de Drais. It looked like an oxen yoke on two wheels and required riders to rest on their pelvises in the middle of the yoke’s long beam and scoot forward, one foot at a time. Shortly thereafter, Denis Johnson came up with a woman’s version of the draisine with a low center bar that allowed women to easily step over and onto it, even wearing a full-length gown. Two other versions of the draisine for women were made – the Lady’s Accelerator and the Pilentum. The draisine evolved into the velocipede, which was a heavy, iron-framed contraption with the pedals attached directly to the front wheels. Women rode velocipede races along the Bois de Bologne in Paris the same year they were introduced. In the 1870s, bicycling underwent another transformation as the high-wheeled penny-farthing was invented. Penny-farthings were hard for women with heavy skirts to ride, but nonetheless a few brave women still did it. Circus performers, early cross dressers, and athletic women rode them. In 1885, the “safety” cycle came about, which is what we know the bicycle to be today. It had two wheels of nearly equal dimension, rear-wheel drive and pneumatic tires. This latest evolution in bicycling made bicycling much more enjoyable and led to a nationwide cycling boom in the 1890s. And during this time, more women began to bicycle.

But according to April Streeter, author of Women on Wheels, some people objected to women riding bicycles from the get go.

“A subtle yet widespread objection to women cyclists as “unfeminine” and “immodest” was a result of entrenched Victorian attitudes, both from males and females. Social conservatives started their attacks back in the days of the velocipede, and they never let up. Skirts – how short they were, how much ankle they allowed to peak out, how unsuitably they clung to lady cyclists’ figures – filled pages of magazine articles.”

Despite this undercurrent of criticism, women continued to bicycle. They bicycled with knickerbockers underneath their skirts and tried to keep a low profile. They noticed that if they carried themselves well, dressed conventionally and avoided riding excessively fast, that for the most part people would let them be.

While bicycling brought freedom and power to women, women brought normalcy to biking and civilized it. As author Benjamin Kidd wrote in 1894, “Everything that is exclusively male is more or less barbaric. Now that woman has taken to cycling, the beneficent influence of the town on the country will be multiplied a thousand fold, and both town and country will show increased traces of the beneficial process of cyclization.”

In the coming decades, however, the bicycling boom of the late 1800s came to an end and automobiles became more and more popular. And as bicycling took a back seat to the car, “bikes were relegated to, for the most part, boys’ toys,” says Streeter. But bicycling is making a comeback, as its environmental, health and social benefits are becoming more clear to cities grappling with economic and public health problems due to unprecedented population booms and the addiction to cars.

How modern day women cyclists can save the planet

City cycling in the US today still enjoys a clear male majority, with about three male cyclists to one female. Though the same is is not true all over the world. In the major European cycling cities such as Amsterdam, Berlin and Copenhagen, which have adequate bike lanes and separated cycle tracks, the gender split is a lot more even. And in a few of these cities, women on bikes even outnumber men.

In New York City, the gender split is approximately 75% males to 25% females. But a closer look shows a more nuanced picture. According to the research of Caroline Samponaro, a researcher for Transportation Alternatives, an intersection without bike lanes showed only 14% female cyclists while an intersection with a protected bike lane show 31% of female riders.

Minneapolis, a city with an extensive network of bike commute routes physically separated from the roads, has a much more equitable gender split – showing about 45% of the cyclists being women.

The conclusion from these three cycling cities is simple says Streeter, “women go riding as soon as roads feel safe.” But should we wait around for cities to make the streets better for cycling or can women become the drivers for increased bicycling throughout the nation? Women had a tremendous impact on bicycling when it was first invented and through its early boom in the 1890s. And they can have an impact today, as cycling once again becomes popular.

Streeter urges women to take to their bikes and narrow the male majority not only for equity’s sake, but for the sake of the planet. As more women ride bicycles, more people will get out of their cars and ride bicycles, including men and children. This is because women are an “indicator species” when it comes to cycling. According to the European Cyclists’ Federation, “in cities where a high percentage of bike trips are by women, overall rates of cycling are high, and cycling conditions are safe, convenient, and comfortable.  Where few women cycle, overall rates of cycling are low, and cycling conditions are unsafe, inconvenient, uncomfortable, and sometimes outright impossible.  Thus…the percentage of women cyclists is a key indicator of the success of cycling.”

Women have a direct say in whether bicycling is going to become more mainstream and in the way our cities are going to adapt to the increasingly tenuous environmental future we are facing. Women getting on their bikes is a powerful way to subvert the US’s century-long love affair with the car that has resulted in greenhouse gas emissions, air pollution and obesity to name a few of the problems that our car-crazed nation is facing today.