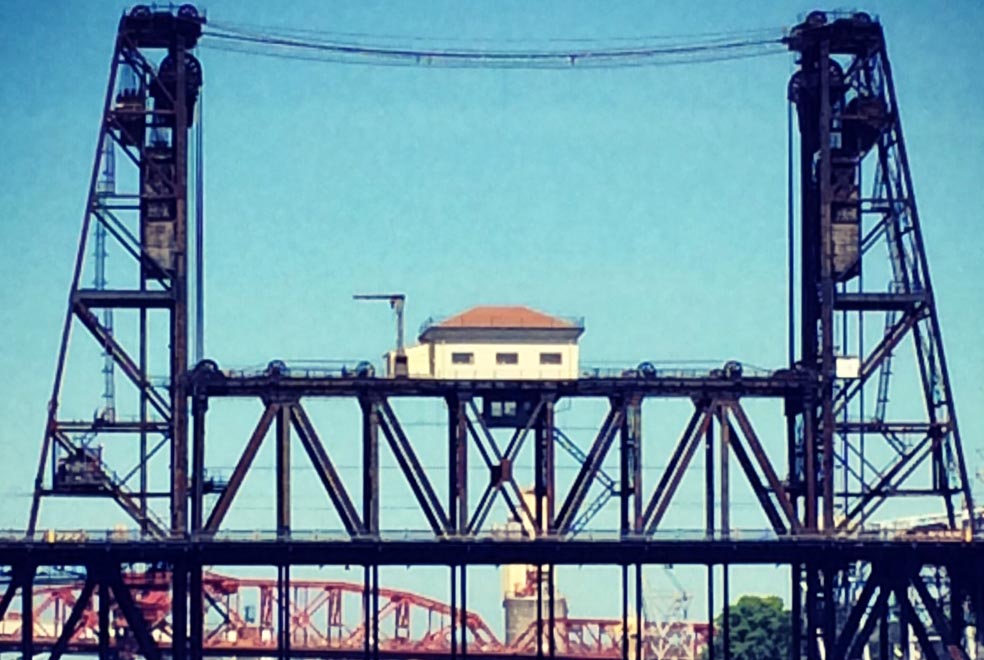 10 Fun Facts About the Beginnings of the Steel Bridge

Here are 10 fun facts about the making of the Steel Bridge we know and love today:

1. Before the Steel Bridge was constructed, crossing the Willamette River into downtown Portland was a terrible hassle for train passengers. People used the R.R. Thompson steamboat to cross the river and then hopped back on the train on the other side of the river. The July 4, 1886 Morning Oregonian reported that “the transfer across the river is a tedious process, involving delays and hazards innumerable. Every traveler who comes to or goes from this city by rail is made to suffer, besides loss of time, vexations which in the aggregate form a real hardship.”

2. The first Steel Bridge, built in 1888, was the first on the West Coast to use steel, which was a relatively new material at the time, as the primary structural material rather than iron or wood. This is how it got its name.

3. The first Steel bridge was demolished only 24 years after it was built. It swung open onto the river to let ships through and the cycle time for opening and closing the bridge was 5 minutes. It was recorded that in one 24-hour period the bridge has to be opened 134 times, this was very inconvenient and made for a lot of interruptions for people and vehicles on the bridge. Plus, as the railways developed, locomotives and cars became heavier and the original span proved inadequate for the new loads. The upper deck of the bridge was too narrow as well, with trolleys, wagons and pedestrians fighting for space. Demolition of this first bridge was completed in May 1913, about a year after the completion of the new Steel Bridge. You can still see remnants of the 1888 Steel Bridge on the east bank where there are still visible trolley tracks embedded into the asphalt.

4. With the original bridge being unable to meet the needs of the railroad and passengers, a new bridge was proposed. Almost everyone agreed that a new bridge was needed, but everything else, including its location, type and materials, was debated. Eventually, in 1909, the Oregon Railroad and Navigation Company applied to the War Department to build a replacement for the Steel Bridge and was approved. The new Steel Bridge was completed in July 22, 1912. It was called the “Harriman Bridge” after the railroad mogul who built it, Edward Harriman, by the Morning Oregonian. Harriman’s railroad simply called it the Willamette River Bridge. But Portlanders retained the original name of the bridge and it is still known as the Steel Bridge today.

5. The second Steel Bridge, the double-deck vertical lift bridge we see today, was designed by Waddell & Harrington, consulting engineers from Kansas City. They owned the patent on the lift span design and did the majority of the design work. But the Oregon-Washington Railroad and Navigation Company engineers assisted.

6. The lift span is a 211-foot long steel through Pratt truss, flanked on both sides by a steel lift tower. The towers rest on piers and are connected to the adjacent fixed spans. The two fixed spans are also steel Pratt trusses, each 287-feet long. The approaches are deck girder spans, except for the 250 feet of filled retaining wall at the west end of Glisan Street. The piers are concrete and rise 22 feet from the low water.

8.While much of the steel superstructure remains intact, the Steel Bridge has gone through a few rounds of renovations. In 1943, all cables of the upper deck and four of the lower deck were replaced in 1943. In 1947, the four remaining sheaves were replaced. In 1949-1951, both the east and west approaches were renovated. In 1950, the west side of the bridge in addition to the original approach to Glisan Street, was connected to NW Front Avenue, Everett Street and Harbor Drive. In 1951, approaches were completed on the east side of Oregon Street, Holladay Street and Williams Avenue.

9. In June 1984, the Oregon State Highway Division and the State Bridge Section conducted some major renovations on the Steel Bridge and Tri-Met added Light Rail to the mix. The asphalt-topped wood decks on the west approach were removed and replaced with concrete. One span of the Glisan Street approach was replaced with two new spans and piers, to give more clearance for Front Avenue traffic underneath. A new approach was constructed for the Light Rail line to NW First Avenue, and an existing ramp from Front Avenue was removed. A pedestrian walkway was reconstructed to pass under the Light Rail ramp from the Glisan Street approach, then back up to the sidewalk on the south side of the bridge. A new steel grid deck replaced the older life span deck. Higher strength steel stringers were placed directly beneath the Light Rail rails while leaving the outside trusses intact. A new gate tender house above the deck on the west tower replaced two gate tender houses on the upper deck. On the east side, the Holladay ramp received a new concrete overlay to accomodate the Light Rail and the exsiting ramp to NE Holladay Street was widened to provide access to vehicles. About 25% of the steel girders were replaced as many of the original girders were deteriorated from decades of corrosion. Light Rail rail slots were installed the entire length of the new construction work from First Avenue to NE Holladay Street. The slots were lined with elastomeric plastic to prevent stray electricity from reaching and corroding the steel superstructure and reinforcement. Close reproductions of the steel sidewalk handrails replaced the originals.

10. In more recent times, the development and increased utilization of pedestrian facilities like the East Bank Esplanade and the West Bank Waterfront Park created a need for a lower level pedestrian and bicycle crossing. One May 25, 2001, the Steel Bridge Riverwalk was opened to the public. This path cost $2,600,000 and was financed by federal and local funding. It greatly reduced the number of trespassing incidents on the railroad tracks.

Tags: history, multi-modal bridge, portland, railroad bridge, Steel Bridge
« Why Fake Vintage Buildings are a Blow to Architecture, Historic Neighborhoods, and the Character of a City  |  Subversive Transportation: A History of Women Cyclists and How Women Cyclists Can Save the Planet Today »