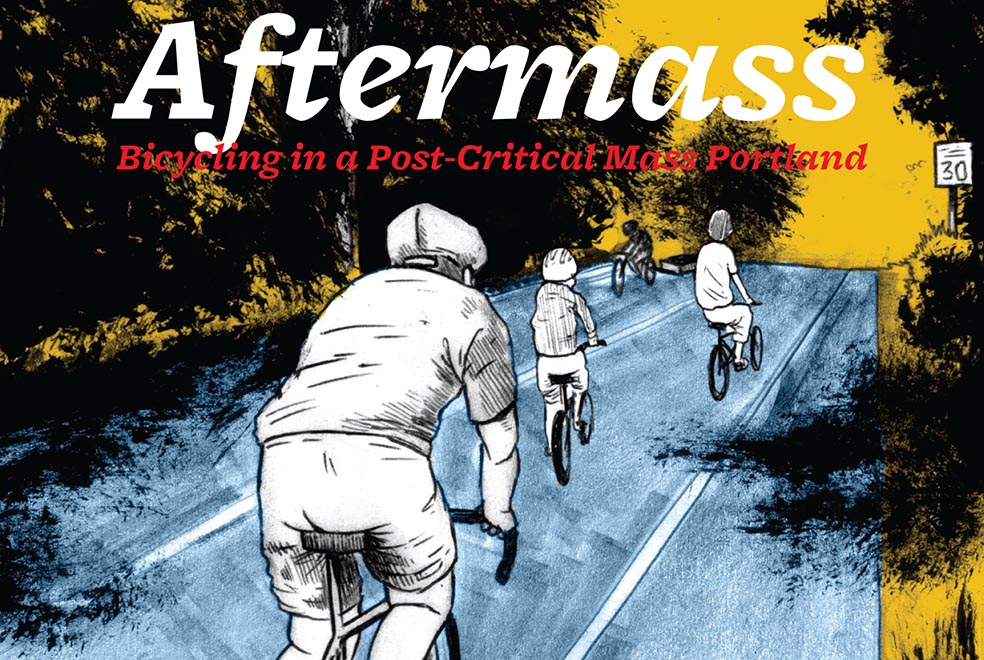 Aftermass: Bicycling in a post-Critical Mass Portland – A Review

I moved to Portland from Phoenix essentially for its reputation for bicycling and transit, knowing that I could lead a car free life relatively easily here. But this weekend, I found out that Portland has not always been “America’s Bicycle Capital”. I went to the premier of Aftermass, a movie directed by Microcosm publisher and moviemaker Joe Biel that documents the tenuous beginnings of the bicycling culture in Portland. It reveals, through a series of interviews and historic footage of key events what an uphill battle it’s been to normalize bicycling in this city, starting with Critical Mass bike rides in 1993.

The first Critical Mass ride in the country happened in San Francisco on the last Friday of September in 1992. As portrayed on an interview with the person who started the ride, Critical Mass had no other purpose than to have fun in the city with other people on bikes. But the very act of people gathering and riding their bikes on the streets was an affront to the establishment and quickly became a form of subversion. Cops became entangled in the rides trying to “protect” motorists from bicyclists who were supposedly break traffic laws, blocking traffic and otherwise “acting inappropriately”.

A year later a Critical Mass ride happened in Portland and it was no different here. Critical Mass riders discovered intense opposition from the police for daring to take to the streets on their bikes. At the time, the city was overwhelmingly car-oriented and there simply was no room on the streets (or in the hearts and minds of motorists and the Portland Police Union) for bikes on the streets. Over the next 10 years, Critical Mass riders endured regular ticket fines, police harassment, and frivolous arrests for being “anarchists”, “inciting violence”, and “disturbing the peace”. Aftermass documents the systematic and longstanding assault on the Critical Mass bicycling community by the police that happened over a decade after the ride began in Portland.

The movie also covers parallel political activism by the Bicycle Transportation Alliance, the first City of Portland bicycle coordinator, and one time city councilman Earl Blumenauer, now a US Congressman. Along with the more radical Critical Mass rides, these simultaneous movements paved the way for bicycle infrastructure and the cultural sea change towards bicycles we see today. Critical Mass made way for Shift in 2002/2003, a structureless organization that to this day organizes bike fun events as an enjoyable and accessible way to advocate for bicycle commuting and carve out a place for bicycles on Portland roads.

But the staunch and disturbing opposition to bicycling as an alternative mode of transportation portrayed in the movie is hard to fathom in bicycle-friendly Portland today. And the point of Aftermass is not only to teach us newcomers about the struggles that happened to ensure the bicycle rights we have today (though that is a valuable lesson to remember), it is to incite further activism and to continue “the good fight” for bicycles and their place on our city streets. Tellingly, Critical Mass in Portland no longer exists today and bicycle activism and bicycle improvements have stagnated over the last six years or so. This is not to say that bicycle culture isn’t going strong, evidenced by record turn outs at group bicycle rides like the World Naked Bike Ride and a whole month of bicycle fun called Pedalpalooza organized by Shift. But Aftermass is a reminder to those of us who value bicycling that the fight is far from over and that we must carry on the work that was started by the brave first adopters of bicycle commuting over two decades ago.

Aftermass is a must-see movie for anyone who wants to know more about the Portland bike scene and how Portland became known as “America’s Bicycle Capital”. And it’s a great movie to watch if you love to bicycle and think that bicycling needs to have a bigger place in American life. But even if you don’t bicycle, watch Aftermass for the inspiring true stories of people who chose to stand up and fight for something they believed in and after a long hard struggle, saw some progress.