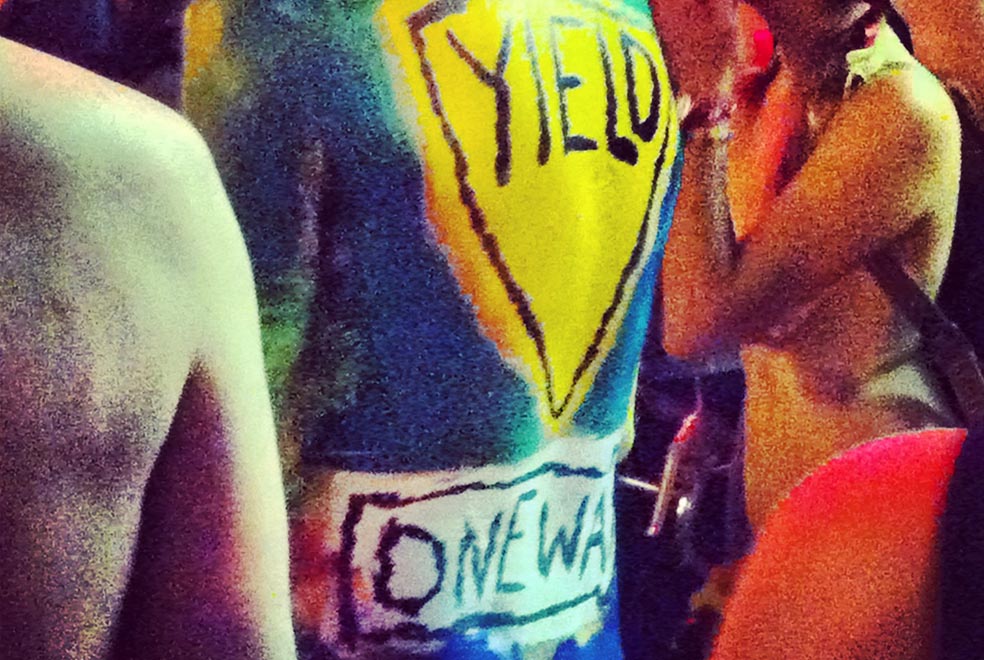 The World Naked Bike Ride (WNBR) may be old news to many Portlanders by now, as this year marks the 9th annual bike ride, but it was a first for me. It was an experience of a life time and one I’ll never forget.

I love that while there are WNBRs hosted all over the world, Portland hosts the biggest. Last year, there were 10,000 people on the ride, and I imagine that this year was even bigger. People reported that they were still spotting riders at the starting point when they were almost to the end of the route.

My friend Kelly and I got there a little last minute, and the naked cyclists traffic jam on the Hawthorne Bridge didn’t help.

We didn’t partake in the Portland Art Museum portion of the ride, which was open for two hours before the ride began at 10pm. Admission to the museum was $1 for every article of clothing, so you can imagine that there were a lot of naked people at the museum that night. But the exhibit on display that evening couldn’t have been more perfect – the Cyclepedia bike design exhibit –  which will be showing until September 8. You can see great photos of this portion of the ride on BikePortland.

Once we got to the starting point on the Park Blocks near the museum, we had to wait and wait for the ride to start, as there were just SO many people on the ride. But waiting had its benefits. For me, I got a chance to soak in the festive atmosphere of naked people as far as the eye could see. Somehow, that evening, it felt very safe and joyous to be scantily clad or complete naked, as the WNBR makes it acceptable and makes it the norm for one night out of the year. 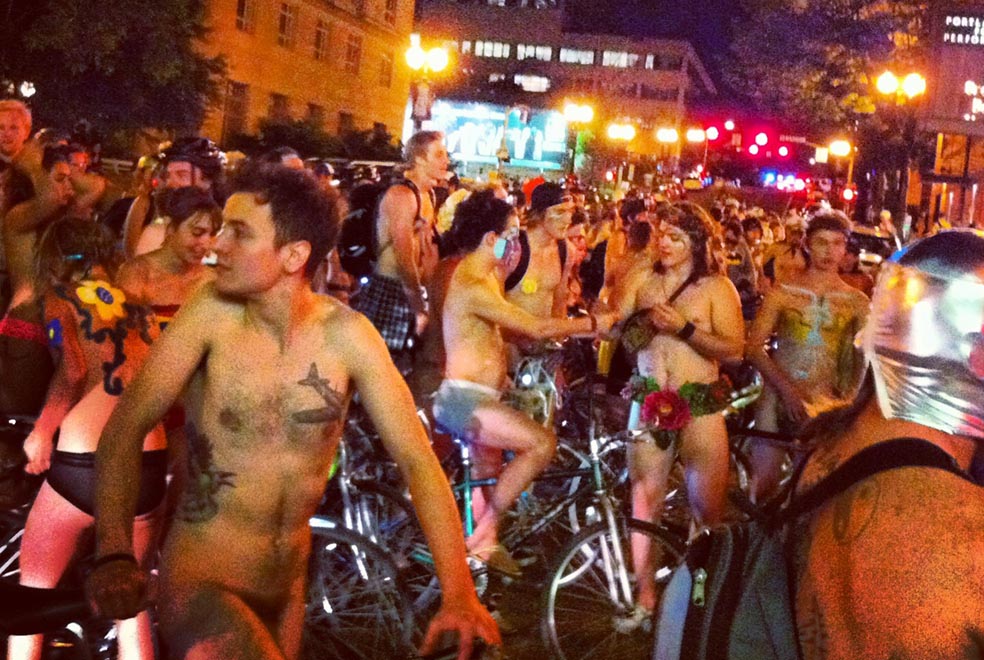 It was getting cold, so Kelly and I got smart and jumped the que, found the point where the ride was moving and joined in. Once we were moving, I understood what all the fuss was about. 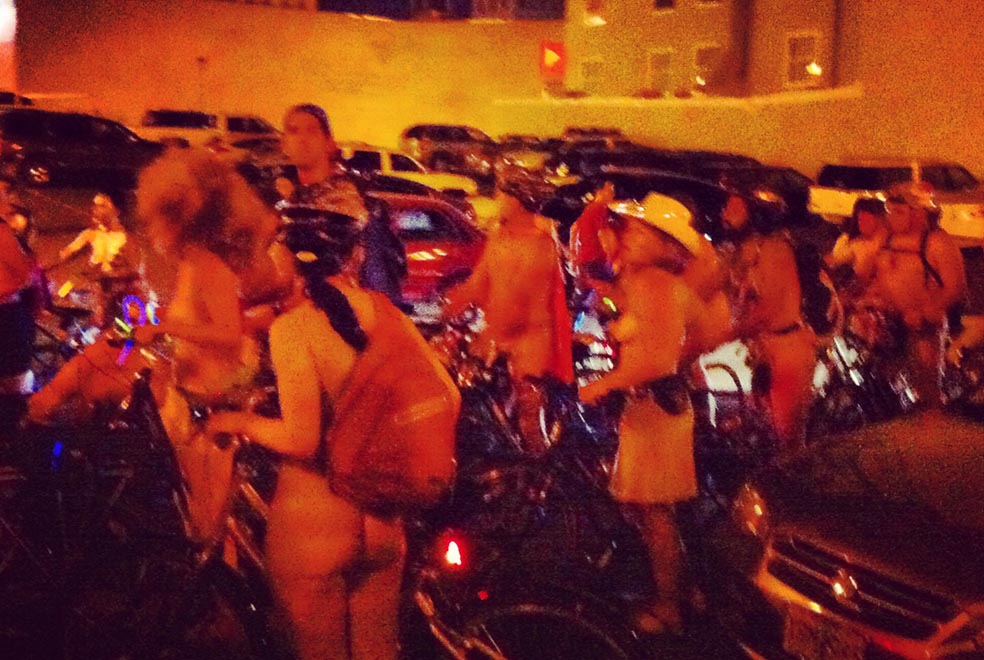 Riding our bikes through the city, with police corking traffic for us, without much clothing on, was extremely exhilarating and yes, joyful. The route took us from the southwest quadrant, through the Burnside Bridge, over to the inner east side and then to the Hollywood District. 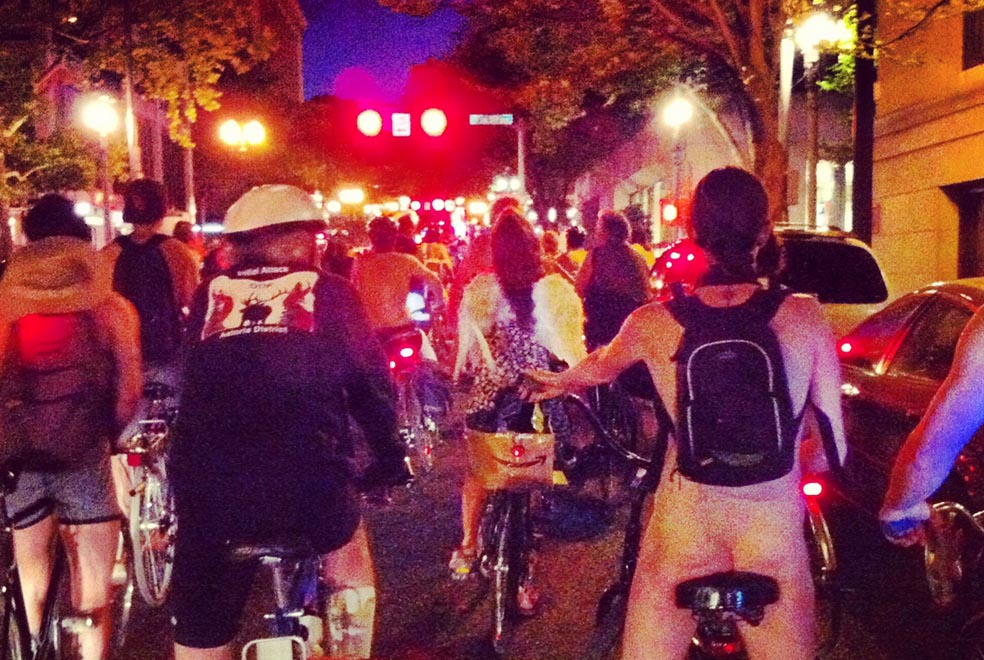 At one point Kelly and I smelled donuts, and we knew we were within spitting distance to Voodoo Donughts Too on Sandy and SE 14th Avenue. We looked at each other and we knew what we had to do. We were going to have ourselves a donut after miles of riding in the cold weather. So we found our way over to Voodoo and saw that we weren’t the only WNBR people who had that thought. Quiet a few naked people were already in line waiting for their donuts. I stood guard of our bikes in the parking lot while Kelly got our donuts.

At first we were both in denial and thought we’d join the ride again, as of course, there was still a steady stream of naked people riding by when we were done. But as the donut settled into our tummy and the cold really got to us, we decided to pack it in and call it a night, and so my experience of the WNBR came to a thrilling donut-ful end at Voodoo, how much more Portland could it get?

I have to say, despite all my anxiety about being scantily clothed in public and seeing naked people everywhere, I absolutely loved the WNBR and I want to go again next year! Here are the reasons why:

There is nothing that builds community more effectively than being naked with other people. Participating in the ride with others was like saying “Hey, you’re awesome, thanks for baring it all and being vulnerable, we’re all in this together.” 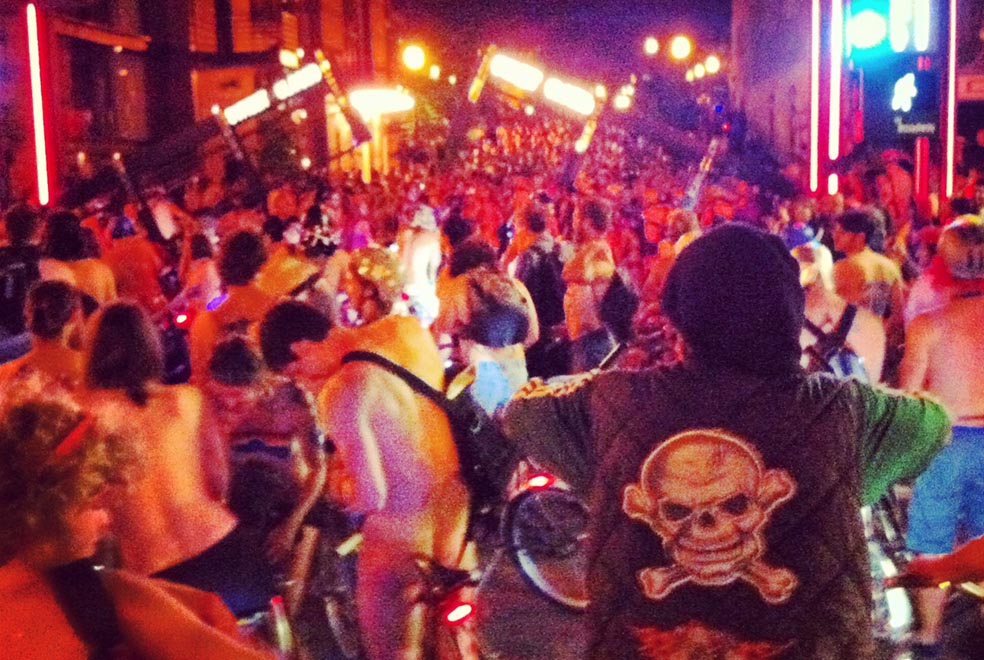 2. Getting to ride through crazy trafficked streets with no vehicles to get in our way

I love corked rides. We had the entire street to ourselves the whole way, and it felt great to be a cyclist that night particularly on roads like the Burnside Bridge and Sandy, which are usually a bear for cyclists because of heavy vehicle traffic.

3. A whole new way to experience the city

While I have ridden pretty much the entire route of the WNBR before, riding with practically no clothes on with other naked people, after dark, on a corked ride was definitely a whole new way to experience the city. I highly recommend it.

The one thing I could do without at the WNBR

There was one thing that put a damper on the joy of the WNBR and that was spectators who were taking photos and videos with their phones. Spectators were just standing on the sidelines, not brave enough to participate, but annoying enough to get their kicks on the sidelines from watching and taking photos of people who were putting themselves out there and being vulnerable.

Note to readers: If you want to experience the WNBR, take your clothes off, get on your bike and join in. But don’t just sit on a lawn chair, with no skin in the game (so to speak), and memorialize the vulnerability of the naked riders on your iPhone for your own entertainment.

I hope at some point, WNBR organizers limit spectators or ban them all together and let naked riders enjoy the experience without having to worry about being photographed, recorded or worse, groped by a gross spectator pretending to give you a high five.