Today’s post is by guest writer Phil Allsopp. Phil is a writer, activist and speaker about reshaping human habitat to restore the unmet needs of people and community, supporting vibrant economies and responding more effectively to the climatic conditions where people live. By re-thinking design and the policies that shape the form and the performance of the places we inhabit, he believes that it is possible to create a future in which everyone can live healthier and more abundant lives without plundering and polluting the planet on which we depend.

Phil’s diverse career in design, public policy and business management and has enabled him to apply his professional and academic background in architecture, public health, and environmental physics, to shape sustainability, performance, and healthy places. Phil is a member of Phoenix Mayor Greg Stanton’s Sustainability Advisory Committee and is a member of the City of Scottsdale’s General Plan 2014 Task Force. Until late 2009 he served as President and CEO of the Frank Lloyd Wright Foundation – based at Wright’s Taliesin West, also in Scottsdale. Phil’s clients include the Gila River Indian Community, Mesa Indian Development Corporation (a Gila River Indian Community Company), Velux Corporation (Copenhagen, Denmark) and Ramona Farms, Arizona. Phil is also a visiting professor at the University of Oregon (Eugene and Portland, Oregon) teaching sustainability from a cross-disciplinary perspective encompassing public health, public policy and human habitats.

I’ve just returned from Copenhagen where I was speaking about human habitat, public health and public policy at a conference organized by the Royal Danish Academy of the Arts and Sciences and Velux Corporation. The themes were similar in many ways to the ones we are struggling with in the US; only about 2% of all built environments are ever deliberately designed by professionals, the remainder being thrown up by developers and builders intent only on profits rather than the effectiveness of what they leave behind.

Imagine what state our health would be in if only 2% of our medical conditions were treated by qualified physicians, nurses and allied professionals!! Our mortality rate would go through the roof and my bet is that our life expectancy would plummet into to the upper 40s to mid 50s.

In Copenhagen, active living – especially bicycling – is a given, as is choice over transportation modes (walk, bike, Metro, train, car); choices that still are unavailable to so many residents of US cities. Copenhagen is building an additional 13 underground Metro stations to serve the city center.

The morning commute in Copenhagen

For a city of barely 2 million, Copenhagen has really taken the bull by the horns and is investing heavily in transit infrastructure and ways of helping its residents stay fit and healthy without having to spend their non-work time (and their hard earned cash) in a gym. In the US, many cities have been wringing their hands for decades deciding whether or not to build a light rail system or whether or not to allow bike lanes. 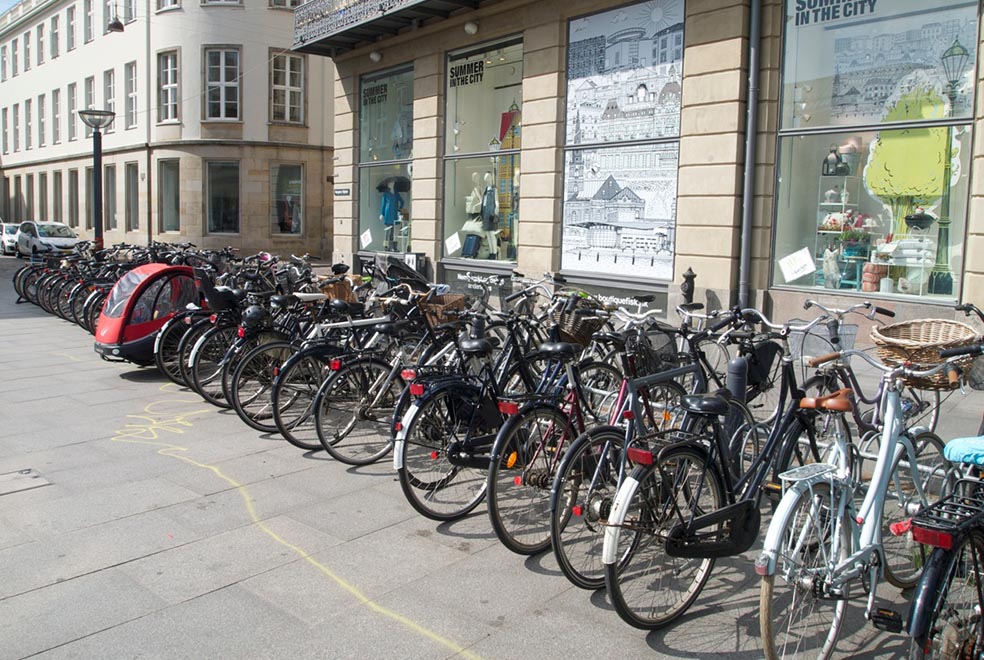 Parking at a large downtown department store in Copenhagen

One thing I did notice was that the Danes looked leaner and fitter (and they smiled a lot more) than the average group of people you can find wandering the typical US mall. My guess is that it HAS to be the bikes and the fact that people don’t use them solely to exercise wearing Spandex and crash helmets; they use bikes as we use our cars in the US – as basic transportation.

Two+ people on this commuter’s bike

How come it is taking so long for the US to make significant moves to re-shape the form and the healthiness of much of its cities and other human settlements? For me, the problem isn’t a construction industry productivity issue (although we could do with a great deal more innovation than is currently the case). The problem for me is that the act of designing and creating human habitat is essentially a public health endeavor.

Of the $2.8 trillion we spent in the US in 2012 on all forms of health care, about half went to the treatment of non-infectious diseases and chronic conditions caused by what we eat and how active a life we lead (obesity, diabetes, blindness, amputations, orthopedic problems, hypertension, respiratory diseases, depression and anxiety etc.). So much of who we are and how healthy we are has to do with the planning design and construction of the places we inhabit; our built environments. Yet for at least the past half century, the design of this most basic of human needs has been relegated by policy-makers as a secondary consideration to the production of money and jobs and the convenience of getting around by automobile.

Consequently we have outsourced the design and construction of our own habitat to whomever can build it the fastest and make the most money doing so. We also have a gigantic scaffolding of laws and prescriptive regulations in the US that shapes almost everything we are surrounded by. From 10 lane suburban streets to bizarre set backs that ensure buildings are set in islands of under-used black top parking, our bureaucracies ensure that the status quo of 50 years ago is maintained in 2013 although thankfully some US cities and regions are beginning to make some significant changes.

So for a whole range of regulatory and economic reasons, we continue to produce environments that eat up resources like there is no tomorrow. Thus far human habitats account for about 64% of the energy we consume maintaining the way of life we currently pursue.  Twenty-five percent of this goes to transportation, which not only reflects the flows of commerce but also accounts for how spread out our city infrastructures are as well as the distances between our human settlements and the means we use to get to and from them.

Even if energy were dirt cheap, this level of consumption is or should be of some concern because it produces what economists euphemistically refer to as “externalities”. Economic externalities – such innocent-sounding things – account for much of the environmental, economic and social consequences of human activity and our human habitat accounts for the biggest slice of the externalities pie.  Externalities maybe external to the core purpose of a particular company, organization or policy, but the effects of those externalities are potent, are usually long term and are invariably hard to change, mitigate or improve.

Climate change is one such externality produced by the way we plan, design, build and regulate our built environments, and it has the potential to be lethal to our species; the planet will do just fine. The incessant demands of our global economy for quarter-on-quarter growth continue to be based on a fiction that infinite resources exist to fuel perpetual economic expansion. Frustratingly, self-serving political goals and the influence of large corporations and their banking allies persist in delaying long-overdue, global action to reduce carbon emissions, the biggest lever for which is changing our built environments – our human habitats.

However, there is a bright light at the end of this economic and regulatory tunnel we seem to be in. It is the growing realization that the places our species builds for shelter and for housing a complex array of social, industrial and educational functions have a far bigger impact on well-being, commerce and competitiveness than once imagined. Research into habitat’s impact suggests strongly that when it is deliberately designed for people, climate and active living, resulting built environments offer a broad range of systemic health, social and economic benefits which far exceed those of more traditional ways of attacking the array of ills our society faces.

The Danes seem to have latched onto a formula for human habitat that works and it’s based on diversity, choice and the idea that human needs for quality of life trump the convenience of the automobile.  While our climates and cultures in the US are different, we do share one thing in common with the Danes; we are members of the same species and have the same needs, vulnerabilities and expectations for quality of life. Our challenge is how we in the US go about re-shaping our economy and the human habitats that support it to give our nation a far better chance of achieving that elusive trio of human rights – life, liberty and the pursuit of happiness.