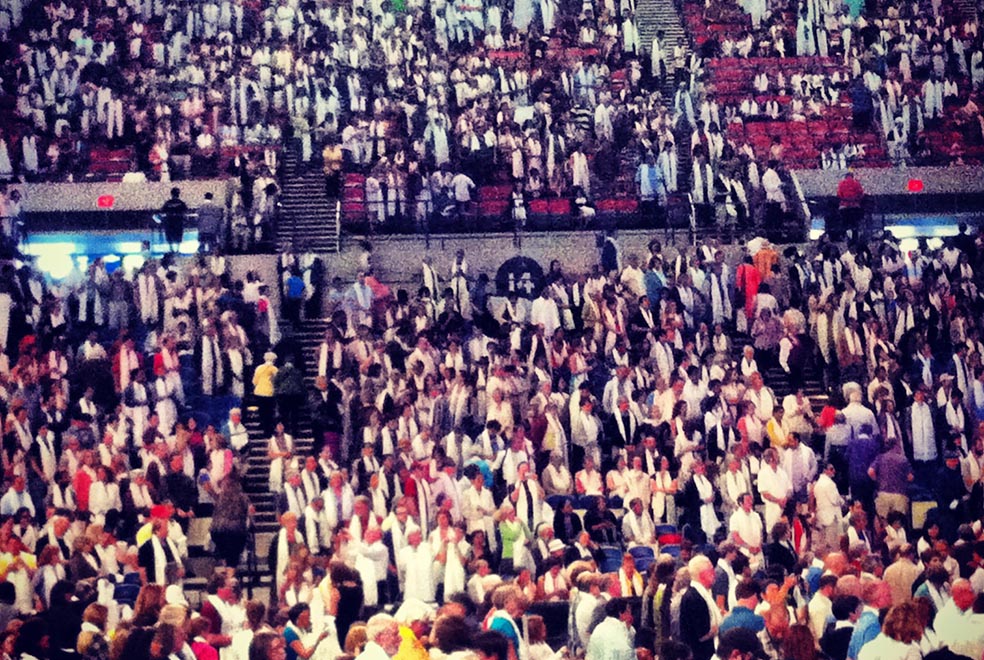 The earth is our home. There is no other place for us to go. We can’t settle on the moon. So we must take care of it, not only for this generation, but for future generations. – His Holiness the Dalai Lama

The Dalai Lama is very down to earth, laughs easily, and makes jokes even when he is talking about the gravest things like global warming or humanity’s tendency to deviate from its natural benevolence. I count myself fortunate to have gotten to see the Dalai Lama speak at the Environmental Summit at the Rose Quarter last Saturday, an event organized by Maitripa College.

The first part of the summit included a panel discussion which was composed of His Holiness the Dalai Lama, David Suzuki of the David Suzuki Foundation, Oregon Governor John Kitzhaber, and Andrea Durbin, the Executive Director of Oregon Environmental Council. The Dalai Lama deferred to the rest of the panelists when it came to technical aspects of environmental issues, but was very clear on his position that we must consider not only the environment, but each other, future generations, and our inner well being in addition to focusing our lives on accumulating material wealth and power.

David Suzuki told a moving story about his father’s last days before his passing. He said that his father repeatedly said that he was wealthy, despite the fact that he was not materially wealthy. What he was referring to as wealth was the loving relationships in his life from friends and family. His father died a wealthy man not because he had lots of money but because he recognized that what’s really important in life, at the end of the day, are our neighbors, our friends, and our family.

What does this have to do with the environment, you may ask.

The panelists agreed that the relentless pursuit of material wealth was a major source of the environmental degradation we see today. In fact, the Dalai Lama hit a few capitalist nerves when he said, “We take growth for granted. We just want to keep making money, money, money. I don’t think this is good. Perhaps I am a socialist. As far as social economy, Im a Marxist. But of course, freedom is very important. Without freedom, a nation will collapse.” He chose his words carefully because so often the words “socialist” and “Marxist” are thrown around like insults, when in fact, those systems have some laudable aspects to them.

Governor Kitzhaber made some strong points regarding our economic system and how we must shift it to reward community service. His point was that if we expand our economics beyond just looking at the bottom line and the Gross Domestic Product and instead,  look at incentivizing people who help each other and help their communities, we would not have the tunnel vision we do today which has led to environmental destruction in the name of making money.

Andrea Durbin implored the audience to take action against the various harmful chemicals that are in children’s toys, packaging materials, and other every day items that people are in constant contact with. She also said that everyone can make a difference by changing their daily consumption habits. She mentioned how in Portland, we live in a sort of eco-friendly bubble. We can bike everywhere, we compost and we share goods with one another, keeping things from the landfill and giving them a new life. I would add to that, that in Portland, there is a culture of being environmentally-friendly, a culture that is not yet pervasive in the rest of the U.S.

I very much enjoyed the mix of environmental and political expertise on the panel with the spiritual dimension that the Dalai Lama brought to it. There was an implication at the summit, from the very get go, that environmental stewardship is closely connected to humanity’s spiritual well-being. That in fact, environmental degradation is a sign that humans have strayed from their natural tendency to care for each other and the planet, toward the relatively recent phenomenon of exclusively pursuing material wealth.

The second part of the summit featured a talk by the Dalai Lama about compassion. Though, on the surface, this subject seems to have little to do with the environment, but of course, it’s very much connected with the conversation. The Dalai Lama said, “Animals never think of beings outside of their own group. But we have the capacity to think about the whole world. Whether we like it or not, we are interconnected, interdependent. We must consider the entire human species in our actions.” This special ability that we have as humans, to show compassion for others that may not be a part of our circle of family and friends, is integral to whether or not we will be able to save the planet.

Will we be able to sacrifice gaining wealth through oil drilling in the Arctic to protect the Arctic nations and the fragile ecosystems of the region? Will we be able to regulate auto-manufacturers, and risk the current automobile economy, to curb greenhouse gas emissions? Will we be able to mandate renewable energy production from our utilities, risking their ability to make money, to eliminate fossil fuels? All of these questions stem from the Dalai Lama’s simple notion of compassion for all of humanity and future generations trumping short-sighted self-interest.

Though it is easy to get overwhelmed by the enormity of the environmental problems facing us, as pointed out by an audience question, the Dalai Lama encouraged people to do what they can. He told people that if they try something to help the cause and it doesn’t work, then they should try something else. He also said that if something is impossible to change, then people should accept that too and focus on the things that they can change, even if it is as simple as turning off the light behind them or taking showers instead of baths to conserve water.

The amazing Environmental Summit, with an emphasis on the spiritual aspect of environmentalism, ended with a treat for the audience. The Red Hot Chili Peppers put on a full concert for the audience to end the inspiring day with a great deal of energy and enthusiasm.

Photo Credit: The organizers of the Environmental Summit gave 10,000 audience members white scarves to don during a ceremony to thank the Dalai Lama for appearing and speaking at the event. It was quite a sight to see 10,000 people wearing white scarves in unity and solidarity. Photo by the author.

Tags: andrea durbin, dalai lama, david suzuki, environmental summit, john kitzhaber, maitripa college, portland, rose quarter, the spiritual dimension of environmentalism
« Dear City of Phoenix, this is Why You Should Invest in Bicycle Infrastructure  |  From San Francisco to Tempe – Attempting to Live a Life with a Low Carbon Footprint »