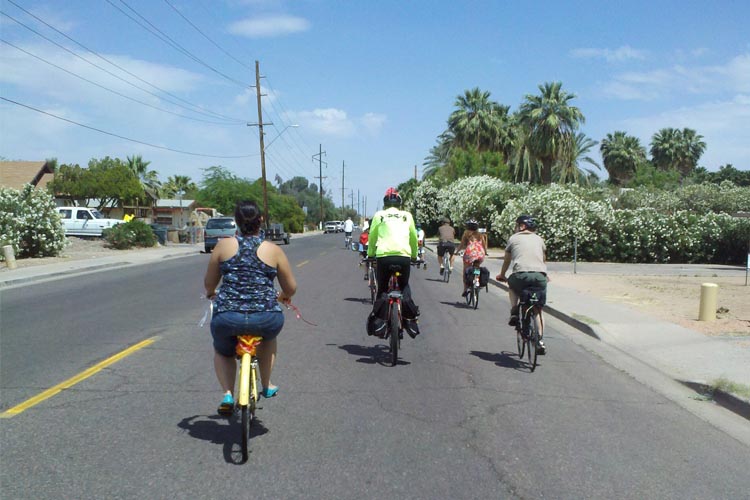 Dear City of Phoenix, this is Why You Should Invest in Bicycle Infrastructure

Today’s post is by contributing writer Robert Diehl. Bob was born and raised in New York City. In college he published a literary magazine and produced performance art in the slowly re-filling area that came to be known as SoHo. His first 16 careerist years were spent in global finance and travel related services until he moved to Dallas with JCPenney. Warding off terminal boredom, a ‘when in Rome’ epiphany led to owning and breeding horses which brought him to the Valley of the Sun in 1990. He moved to a small horse ranch nestled in a desert landscape along the far edges, which kept moving farther out. It was a wonderful interlude, which ended in 1999 when he moved to downtown Phoenix, opened an art gallery, married his wife, Flannery and helped raise her daughter. Empty nesting brought a new set of ‘what do I want to be when I grow up’ questions, and this occasional series is one of the attempts at answering them, along with creating a TEDx series on urban resilience, joining Hance Park Conservancy, Friends of the Hance Park Dog Park, Roosevelt Action Association, Arltlink, CONDER/dance, helping save mature street trees from pedestrian enhancement bulldozers and otherwise pestering municipal leaders with irritating questions.

Below are Bob’s remarks at a City of Phoenix Budget Hearing on April 16, 2013 to convince the city to allocate funds for improved bicycle infrastructure:

I want to spend the rest of my life in Phoenix – but a Phoenix that has dense urban neighborhoods. If this doesn’t happen soon I’ll have to leave Phoenix while I can still ride my bike. We went car-free this year in order to keep the pressure on ourselves to help you do the right thing by our City’s future. Or, to move away of course …

You’ve earned this consideration because:

1. You’re wonderful at restraining expenditures, and over this recession have kept top credit ratings with S&P and Mopodys.

2. You have abundantly realized the American municipal ‘manifest destiny’ of the post WWII era, moving us from 99th to 6th place in city population by

We beat out just about every city in almost all of these categories the past 60+ years, except that:

– our per capita income is almost in last place among our peers – the top 10 cities in America [2.5]

$72 Million a year [2.7] go just to maintain all that roadway. Luckily, most new roads are paid for by developers of new subdivisions [2.8],

– and two thirds of the street and intersection widening is paid for by assessments to local businesses, and local injections of State and Federal tax revenue

Who needs this more, drivers or bicyclists? But I digress.

What does all this have to do with increasing the bike lane budget?

My time’s up. I’ll be at Thursday’s Library meeting [Bob’s remarks from this hearing are below] and need to finish that script before then. In the meantime, remember: building bikelanes builds wealth!

This is the presentation Bob made on April 18, 2013 at the second City of Phoenix budget hearing:

Full disclosure – I produced a yearlong series of nine TEDx events on Urban Resilience and was asked to give a TEDx talk this year on Urban Dsiruption in conjunction with the globally simulcast Gates Foundation’s TEDx. I became increasingly concerned, while writing that talk, that I should deliver it to our City’s stewards before they hear it from another stage. This 3-parter is a slice of that.

So, about our 500+ miles of bike lanes – that’s an impressive 5% of our total street mileage, about 1 out of every 20 feet of street. I haven’t been able to find it though – where are all these miles? How much did it cost to create them? What impact have they had on City life? I can’t find much on those topics.

So I turned to a City that seems to have documented these things well – New York – which has created 250 miles of bike lanes for $21,000 a mile in the past 6 years – and got the Federal Government to give it $6.4 million to do so. Where is our version of that $6.4 Million?

NYC has learned a lot from this $8 million effort including the fact that, on average on streets with protected bike lanes, traffic accidents fall by 40%. Every single kind of traffic accident. In Phoenix that could mean $500 Million a year in recovered economic activity, dozens of lives saved and hundreds of injuries prevented.

Here are some per capita fun facts:

This is a break down of Phoenix population dynamics:

– We have 1.5 times the national rate of uninsured households [22.7% vs 15.1%] That’s a lot of medical expense the taxpayers pay for. Why? Because maybe, beside working for Walmart, partly we’re more terrified of not having a car than not having health coverage, and a car costs $9,000 a year on average to own, drive and insure?

– Over 1.3 times the national growth rate in 30-44’s [10.5% vs 7.8% – the cohort with the highest mortgaged home rate [92% of homeowners have mortgages], the highest mortgage debt to income ratio, and the largest number of financed vehicles. This has the effect of draining $3Billion out of their personal income and out of the local economy. That represents 83k houseolds, 14% of our households pouring $17,000 of their household income out of the local economy every year – the other half, only $7.600.

Where we are challenged:

– Phoenix loses $5,000 for every household relative to a high transit city like New York – where the wealth is lost forever. That’s another $2.6Billion lost, on top of the $3Billion lost by our Baby Buster households alone.

So $6 billion in just a few categories – car ownership, traffic accidents and the mortgage interest paid by baby busters, sucked out of gross personal income of only $29 Billion.

We have lost a few demographic rounds in the fight to make our future good. Let’s setup to win a few – stop quibbling over whether to add or subtract 5/100’s of a percent of streets budget to bike lanes – let’s stop the next 10 miles of streebuilding and throw those millions in bicycle infrastructure. Why? Think about it. Please.

City of Phoenix lists having

4,845 miles of roadway http://phoenix.gov/webcms/groups/internet/@inter/@dept/@pubworks/@news/documents/web_content/056273.pdf and

$  15 Million is clearley sourced to impact fees and

154,294 Weekday ridership inside Phoenix of all Valley Metro lines

3,594 Weekday bicycle boardings inside Phoenix of all Valley Metro lines

Page numbers cannot be cited. There are two lines in the report summing up ridership at locations inside Phoenix borders as follows