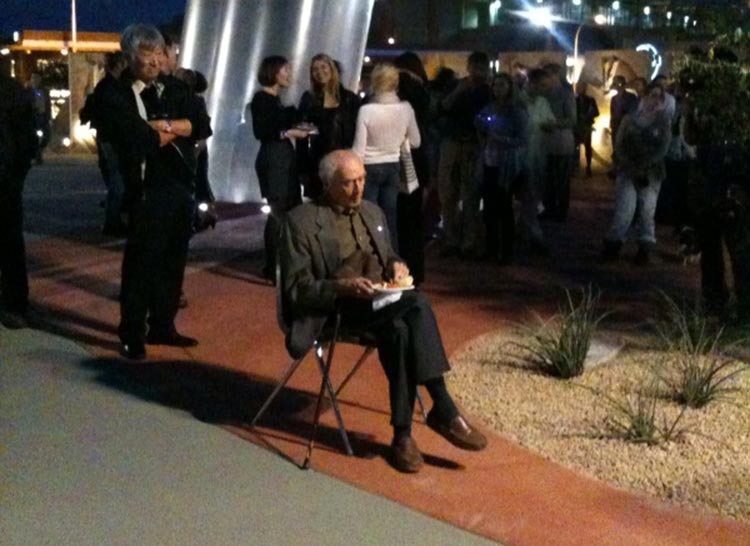 In Memoriam: A Timeline of the Amazing Life and Work of Paolo Soleri

In honor of his memory and achievements, below is a timeline of his inspiring life and work that spanned the globe and influenced many people, movements, aesthetics and ways of making.

1946 – Soleri moves to the U.S. after receiving a doctorate with the highest honors from the Polytechnic University of Turin

1948 – Disenchanted, Soleri leaves Taliesin West with friend Mark Mills. They set up camp in the Arizona desert under a crude, cantilevered column constructed with concrete blocks

1949 – Soleri and Mills build a house with their own hands for client Lenora Woods and her daughter Corolyn Woods.

1950 – Soleri returns to Italy where he designs and builds a ceramics factory with bulging, thin-shelled concrete walls in Vietri on the Amalfi Coast.

1953 – Construction of the ceramics factory is completed

1959 – Soleri begins drawing concepts for a series of compact cities that expand vertically, not horizonatally, which eventually would be compiled into the seminal book –Arcology: A City in the Image of Man

1966 – Soleri begins work on the design of the Paolo Soleri Amphitheater in Santa Fe, New Mexico

1969 – Soleri publishes Arcology: A City in the Image of Man

1970 – Soleri begins construction on Arcosanti, a community planned for 5,000 people and a prototype for his utopian design of an “arcology”, 70 miles north of Cosanti. Arcosanti is still under construction and well over 6000 people have participated in its construction since 1970. Also on this year, a landmark exhibition called “The Architectural Visions of Paolo Soleri” organized by the Corcoran Gallery of Art in Washington D.C. travels extensively in the U.S. and Canada attracting record attendance

1976 – Soleri is a key participant at the UN Habitat I, the first UN forum on human settlements

1981 – Soleri wins the Gold Medal from the World Biennale of Architecture in Sofia, Bulgaria

1984 – Soleri wins the Silver Medal of the Academie d’Architecture in Paris. In this year, Soleri also participates in the world-renown Architecture Symposium on Man and Space at the Vienna University of Technology

2012 – The feature length documentary film, “The Vision of Paolo Soleri: Prophet in the Desert” is completed

Photo Credit: Photo at the dedication of the Soleri Bridge and Plaza at the Scottsdale Waterfront. Photo by the author.

Tags: paolo soleri dies, timeline of paolo soleri life
« Community Action, not Top-Down Overhaul, Will Lead to Walkability in Phoenix  |  Why You Should Go Watch “Paolo Soleri: Beyond Form” Tomorrow… »