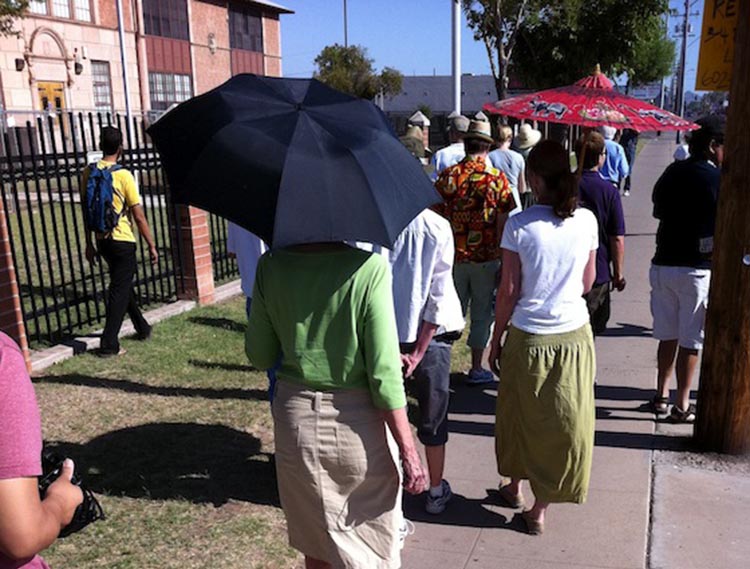 Community Action, not Top-Down Overhaul, Will Lead to Walkability in Phoenix

The AIA Arizona office downtown hosted day two of Phoenix Urban Design Week’s Urban Tactics Symposium, which featured keynote speaker, planner and walkability expert Jeff Speck and a panel of planners, researchers and designers who presented key strategies that can help Phoenix become less autocentric and more of a socially oriented urban space. The author of “Walkable City” gave an overview of the first section of his book, laying down the case for walkability’s powerful impact on the overall quality of life experienced in a city.

As each presenter built upon the other, one thing became clear: The suburban sprawl that became the basis and burden of our daily experiences in Phoenix is reaching the end of its wearisome reign over our city’s social life. In Phoenix, the people are taking the city back from the car.

Walkability is relevant to everyone

Speck posed the question, “Why walkability?” and presented a host of economic, environmental and public health data that he said went beyond the more aesthetic arguments urbanists made when promoting downtowns decades ago.

As Speck covers in his book, different studies illustrate that people who live in more walkable environments tend to contribute more to their local economy, burn less fossil fuel and have fewer issues with obesity and diabetes. Speck added that a new generation of people — Millennials like myself — is discovering the value of downtowns’ denser, more walkable and closer knit organization and what it provides for them in terms of quality of life. Quality of life is the first criteria they consider when moving, and the nation’s biggest and most innovative employers are taking notice.

“If you look at Millennials, they’re vastly different from my generation,” he said. “In the 1970s, one out of 12 19-year-olds opted out of getting a driver’s license. Now it’s one out of four … There are market shifts in what Millennials want.” Speck said car ownership and even home ownership create a sense of onus for them, and they value having access to nature and being connected the most.

Even Baby Boomers, who Speck said are moving downtown in droves to keep their independence and avoid the costs and chores of driving and maintaining a large family home, are increasing demand for more walkable urban forms.

In a sense, walkability is a technical expression of a downtown’s utility. It can be understood to be a measure of the intricacies between the many parts that make an urban core. Though living “car-free” is considered a lifestyle, the notion that transportation is defined by the automobile is problematic given its numerous external costs. More walkable spaces are appealing and create an ecosystem of social and economic activity that the car has not been able to replicate.

Students of Milagros Zingoni’s graduate architecture and urban design studio showcased their thesis projects, which focused on changing the bleakly car-dependent culture of west Mesa through conscious design. Focusing her studio on social and habitat reform, Zingoni said it’s necessary to think differently from how we did when we created a problem.

“How do we redefine what we use?” she asked, noting a pattern of distance, dispersal and disconnect in west Mesa that could be revitalized through creativity, continuity and cohesion. Students were asked to reduce cars’ use of land by at least 20 percent in their interventions.

Shaheen Gazvini envisioned a systematic retrofit plan that would make a stretch of street near the new Chicago Cubs stadium project on Dobson Road a space for what he termed serendipitous social interactions. He identified a lack of engagement with the neighborhood’s surroundings and the exporting of informal gathering spaces from them as key problems.

“[The] city is just covered in fields of asphalt and concrete,” he said. “From our house we get into our cars and drive down these wide corridors that are walled off from our communities, and we drive long distances to get to our places of work, etc.”

By tearing the walls down and increasing density to design “stitched together” networks of affordable, mixed-use housing, local programming and communal garden space, Gazvini strives to bring third spaces or places for social activity within walking distance of homes.

Liz Hoar focused on the Fiesta Mall, which was once an economic center for west Mesa. It has struggled to rebound after demographic and market shifts caused an exodus of retailers. She proposed a complete identity change for the shopping center, turning it into a city square and transforming entire sections to form a complex, interconnected web of diversified community use. The mall’s vast parking lots were converted into housing or athletic fields in her scheme.

I am familiar with west Mesa’s urban issues on a personal level. I have been living near the Fiesta Mall for a few years, and only for a portion of that time have I had access to a car. I have walked through the Fiesta Mall parking lot multiple times, and I know what it is like to go past empty lots, vacant strip malls and neglected public landscaping as a pedestrian. Seven lanes of fast cars cut past me and a small, but constant amount of walkers as they drive on a mangled surface scabbed with potholes.

The breadth of Hoar’s reprogramming of the Fiesta Mall connects the already existing social and economic centers of the Hilton Phoenix/Mesa Hotel, Mesa Community College and Banner Desert Medical Center and revives the engine the mall once was. Instead of consumerism being the uniting force, Hoar makes a cohesive sense of community the principal intention of the space.

Whitney Warman constructed a cyclocentric or bicycle-oriented urban design for Mesa as a means of returning social spaces to the community. She noted that many residents, especially around Mesa Community College, use bikes as their mode of transportation. Bicycle servicing stations combined with mixed-use buildings that capitalize on west Mesa’s higher density to create currently sparse third spaces.

The city of Mesa has already begun to progress into a new expression of planning and design that is capitalizing on the pedestrian experience. As streetscape improvements begin next year on Southern Avenue between Dobson and Alma School Roads and as downtown Mesa connects to the light rail, exciting concepts these graduate students highlighted in their presentations will slowly become a reality. To completely reform the west Mesa habitat will require substantial car-use reduction and infill development that gives people a variety of destinations to visit.

Making the vision a reality through local action

Architect and urban designer Kevin Kellogg reminded the symposium audience that the tactics of real-estate development are not the same as the tactics of urban design and that, in fact, the principles of both fields have conflicted. Community building has traditionally been considered only as a byproduct of the sales real estate drives. Yet in some ways, he said, the marketing strategy of vibrant, fun, more or less socially inviting and attractive spaces like lofts that are close to the light rail can teach urban planners and designers to make their more strategic methods feel more relevant to the end user.

Kellogg proposed a fusing of real-estate and urban design tactics with a guerrilla sense of local action in order to bring about a more walkable experience in midtown Phoenix. While increasing density that supports a constant buzz of activity on sidewalks will require the cooperation of developers, city council and the planning department, he drew examples from the students he teaches at ASU to show how smaller groups can organize water stations or creative public comment boards as a way of making people feel more present in public space. Kellogg said it’s important for people to engage emotionally with the end products of urban policy and planning.

Eileen Yazzie and Alice Chen from the Maricopa Association of Governments reviewed the regional planning authority’s studies of the connections between land use and transportation. Yazzie, sharing the Sustainable Transportation-Land Use Integration Study (ST-LUIS), said that what is most important for cities to understand is that substituting car use with public transit is dependent on how markets for housing and mixed-use buildings can support the new system. While rail will probably not be feasible in every Valley region, a more tailored solution can be found for cities’ land use and transportation plans. Yazzie identified a small, focused rail network with an upgraded bus system that feeds the rail networks is currently the best means of extending transit to much of the region.

Chen presented a list of design ideas compiled by the MAG after the Designing Transit-Accessible Communities study was completed. Valley bus users were surveyed in order to make a set of considerations for urban designers and city councils. Examples included how to present wayfinding information graphically or through technology and orienting bus-stop shelters with the path of the sun for maximum shade. Design paradigms need to be flexible to the budgets of cities and the needs of pedestrians, cyclists and transit users.

Subduing autocentrism won’t be accomplished by a massive overhaul of freeways that took decades to build. Transportation and development patterns will evolve through the consciousness and deliberate action of relatively small-scale design. The coordination of planning authorities, city departments and the market will be necessary, but in the mean time, community groups and other organizations that take advantage of public art, urban agriculture, landscape design, lighting programs and transit-oriented development ─ even wildly popular foodtrucks ─ are growing the community that was previously written off as the byproduct of economic development. These groups are simultaneously proving that economic and community development are two sides of the same coin.

*Upcoming Event Alert: For those of you who live in Phoenix or will be in town for Modern Phoenix Week, come check out the Modern Phoenix Superlite Plant Tour I will be hosting on April 19, 2013. Tickets are $40 and a portion of the proceeds will go to benefit the Arizona Preservation Foundation. Click here to buy tickets!*