Today’s post is by contributing writer, Will Novak, an officer of the Thunderdome Neighborhood Association for Non-Auto Mobility.

The City of Phoenix Streets Department is finalizing a new design for Roosevelt Street in Downtown Phoenix, between Central Ave and 4th Street, with the goal of making it more pedestrian-friendly.  While this ought to be exciting news here in the land of six-lane arterials, the plan the City has shown the community is underwhelming at best.  While hundreds of jurisdictions across the country have adopted “Complete Streets” policies to promote walking and biking, Phoenix is being left in the dust and this project is no exception.

The City has received a large federal grant to improve Roosevelt Street for pedestrians and provide wider sidewalks.  These are both admirable goals, but the grant doesn’t specify exactly how wide these “wider” sidewalks must be.  The current conditions on Roosevelt Street show a patchwork of broken sidewalks ranging anywhere from 6 to 10 feet (though 8’ is most common).  While the current sidewalks are too narrow, the City seems intent on creating the opposite problem as they are pushing for overly-wide 20’ sidewalks.  While 20’ sidewalks are appropriate in some high-density urban shopping settings (i.e. Michigan Ave in Chicago) they’ll lead to empty feeling sidewalks on Roosevelt Street. 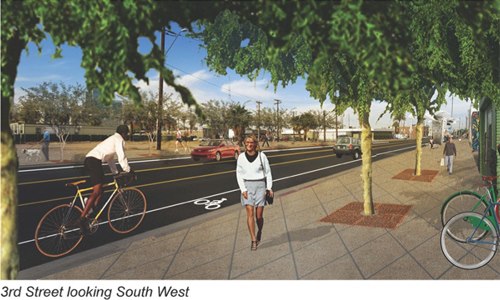 The biggest problem with the City’s current design is the removal of our existing on-street parking.  While at first it may seem counter intuitive that parked cars are better for pedestrians, when we think about it, they are essential.

The Benefits of Parallel Parking

If you think of your favorite mid-density, urban shopping street anywhere in America, I’m willing to bet it has on-street (usually parallel) parking.  Whether its Newbury Street in Boston, Haight Street in SF, Hawthorne St in Portland, the Miracle Mile in Coral Gables, or Mill Avenue in nearby Tempe, they all have parallel parking. Why is it that the best urban streets have parallel parking?  It’s because parallel parking does many wonderful things:

1.     The Buffer: A row of parallel-parked cars creates a 2,000-lb steel buffer between pedestrians and moving vehicles.

Cars that might jump the curb and otherwise injure pedestrians or people at sidewalk cafes are much less able to cause a serious injury if they have to plow through another automobile.

When the City of Phoenix was asked “what provides a pedestrian buffer in your plan?” they proudly stated “there’s a bike lane between the sidewalk and auto lane.” The City of Phoenix apparently thinks that cyclists are the speed bumps for out of control vehicles.  There won’t even be trees to protect pedestrians because those are being placed 10’ from the curb.  So removing our parallel parking on Roosevelt will directly expose the sidewalk to moving traffic, similar to McDowell or 7th Street.  Those are not conditions we should be bringing to Roosevelt.

It’s also important to remember that Transportation for America ranks the Phoenix metro as the 8th most dangerous place for pedestrians in the US.  In the last decade nearly 900 pedestrians have been struck and killed in the Phoenix metro.  But it should be noted that none of the pedestrian fatalities in the urban core have happened where we have on street parking.

If you’re driving but want to quickly stop in to Song Bird for a coffee, you don’t want to park in garage, go down an elevator, cross a street, etc.  Parallel parking is ideal for people grabbing coffee, take-out, or dropping off a package.  It adds to that great hustle bustle, urban feel that we all want Roosevelt Row to have.  Seeing a row of parked cars in front of a business also gives passers by a visual cue, “There’s something happening here, people are into it, maybe I should check it out.”

One of the biggest hindrances to our downtown is ‘gaps’ in the urban fabric.  Good streets have a continuous wall of storefronts to peer into or at least other visual interests at the pedestrian level.  When we remove on-street parking, that slack must be picked up somewhere else.  That means more shopping mall style surface parking lots, which are the antithesis of urbanity.  More surface lots also means increasing the urban heat island.

Parallel Parking is Great!  So…why aren’t we getting it?

Unfortunately when it comes to on-street parking, the City of Phoenix has an antiquated, suburban policy.  It’s the City’s policy to ask adjacent landowners whether or not they want on-street parking.  While input is great, adjacent landowners should merely be providing feedback, not the final say on our public right-of-way.  After all, the nearby landowners may be restaurateurs, retailers, or artists – it’s not their job to be experts on street design.  The City Streets Department should be leading the way by educating the public on what a complete, urban street looks like and how it functions, instead of conceding design control to landowners who lack the expertise in this critical field and thereby giving the broader community a product that no longer reflects national best practices.

It’s not surprising that some landowners may want overly wide sidewalks and no street parking.  They’re concerned that they need huge sidewalks to handle First Friday crowds.  Unfortunately, that sort of short-term thinking means comfortably wide sidewalks one day a month, and an empty auditorium feeling for the other 29 days.  There’s a myriad of other creative solutions that can be applied to First Fridays – the easiest being to simply bag and barricade the street parking for one night each month to accommodate the exceptional pedestrian traffic (which is what we do today).

Some landowners want extremely wide sidewalks to provide space for very generous street-side dining.  With eight months of great weather, Phoenix is an ideal place for street-side dining.  However, many cities have street-side dining without overly-wide 20’ sidewalks.  Luckily, creative folks have also developed the idea of “parklets.”  These temporary boardwalk type structures drop into a parallel parking stall and create wider pedestrian and dining options where needed.  This is a versatile solution, instead of following the current “one sidewalk fits all” plan. 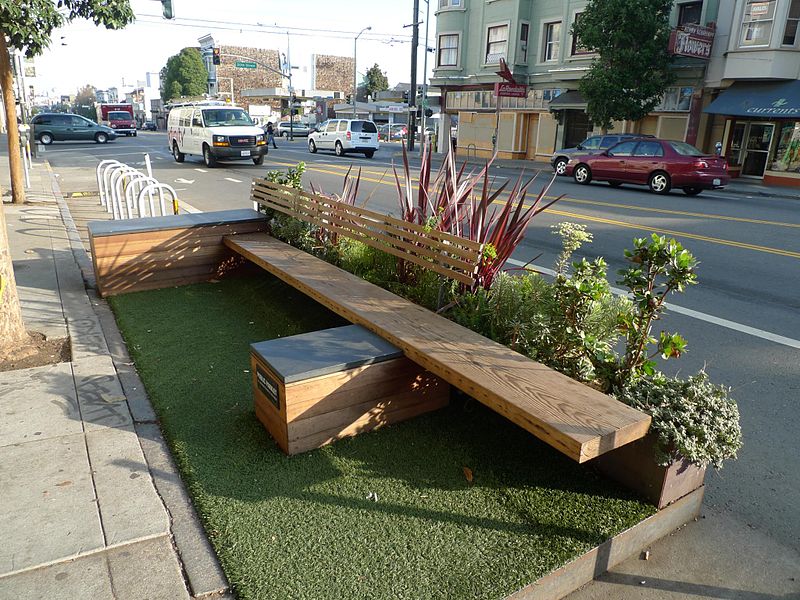 Imagine eating a sandwich from Carly’s on a parklet some lovely March day.

Unfortunately, to change the City’s current design and gain (or should I say, keep) the benefits of on street parking on Roosevelt, we must act very fast.  The City will submit its final design for the federal grant on March 15th.  Luckily, the City does have a plan that includes parallel parking, and says they will revert back to it if that’s what the community wants.

This plan creates a true “complete street”.  It has enough room for pedestrians, even on busy First Fridays.  It preserves parallel parking and all its benefits, but also allows for parklets and street-side dining.  There are the same allowances for bike lanes and automobiles, too.  It isn’t the perfect design (that would require removing the center turn lane and separating the bike lanes), but this plan is by far the most versatile and the most urban that we can hope to realize.

We hope you agree that a “complete street” with parallel parking is best for Roosevelt Row.  If you do, we encourage you to contact the City of Phoenix Streets department and let them hear from you.  They can be reached at:

Remember, the City only has until March 15th to decide whether or not to include parallel parking, so please let your voice be heard immediately. Roosevelt Street may be our best hope for a quality, urban, walkable street in the next 10 years – and will likely serve as a template for other downtown streets – so let’s make sure to get this right.

« The Story of African Americans and Other Nonwhites in Portland, Part II  |  Building Evolution: How Biomimicry is Shaping the Nature of our Buildings. »