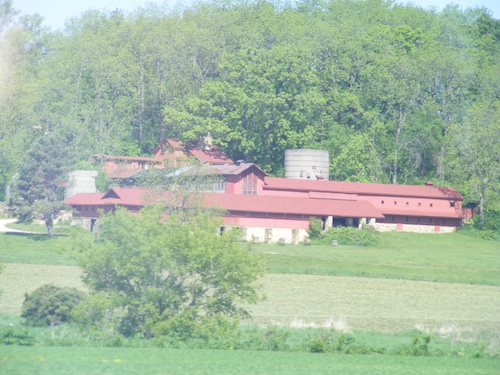 Why Arizona Owes a Great Debt to Frank Lloyd Wright

In my previous post, What is the Arizona School, I mentioned that Frank Lloyd Wright was the father of the Arizona School, a term coined by Reed Kroloff for the style of architecture unique to this Place – the desert.  Yesterday, I had the pleasure of taking a tour of Taliesin, Wright’s farm, residence and school complex in Spring Green, WI.

This tour gave me a deeper perspective on what Wright was working on before he made Scottsdale his winter home and embarked on a new style of architecture that gave birth to the Arizona School.  What was remarkable to me was that although his work looks different throughout different periods of his life and based on the location he was in, his design philosophy never changed.  His philosophy of architecture, called the “organic style” is based on creating harmony (not dominance) of the built environment with nature.  So he had already formulated the notion of being connected to the land around him and he was using local materials such as sandstone and limestone from the river on his farm even in his early buildings at Taliesin. 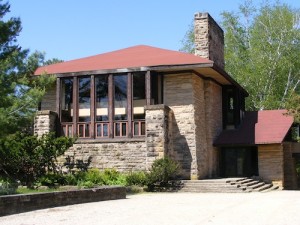 The building knows as Hillside, built with sandstone from the nearby river

Only after visiting his pre-Arizona work did I realized how indebted the Arizona School really is to Wright.  His sensitivity to place and reverence to nature was already in place long before he ever came to Arizona. 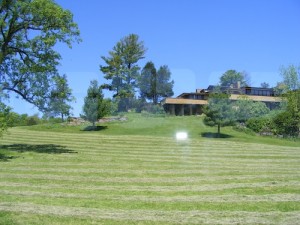 Taliesin means shining brow in Welsch – the residence was sited on the brow of a hill, not on it’s crown as a sign of deference to nature

Wright is known for his tremendous ego, but he didn’t really have an ego when it came to nature.  When in a natural setting, his buildings are always subservient to their surroundings.  This fundamental deference to nature is why he was able to bend and twist and create a whole new aesthetic appropriate to the desert.

The beautiful part is that Arizona has such an intensely different natural landscape than any other place that it provided an incredible playground and canvas for his “organic” design philosophy.  The open skies, the desert floor, the rocks and the mountains were new and strange and a testament to the supremacy of nature over the built environment.

Because of Wright’s brave choice not to fight the desert, not to recreate the lush, green landscape of his midwestern home, but to embrace and glorify the very different landscape he landed on, he paved the road for the Arizona School.  And people like Al Beadle, Will Bruder, Eddie Jones and Wendell Burnette have designed beautiful desert buildings on the shoulders of this brilliant man.