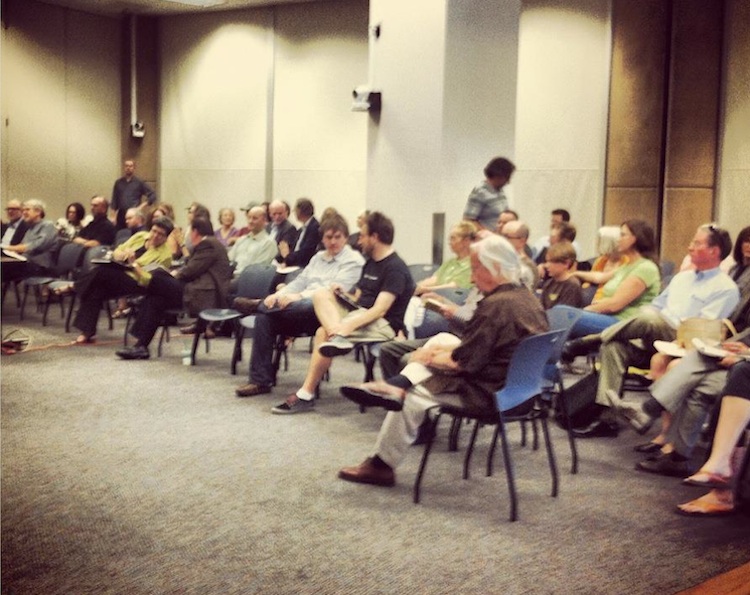 Yesterday afternoon as a full house with an electric atmosphere at the Historic Preservation Commission meeting at Phoenix City Hall, surprising many of the commissioners who’re used to seeing only a handful of seats taken at these meetings. Everyone was there for the landmark designation recommendation for the David Wright House.

It’s a no brainer that the David Wright House is worthy of a landmark designation, but the rub lies in that the owner has not given permission for this designation. And in Phoenix, we don’t normally go through with a historic preservation designation without the owner’s approval due to Prop 207. The argument for urging the commission to recommend landmark designation even without the owner’s consent is that this house is so significant, it deserves special consideration, that the preservation of this house is bigger than private property rights.

The support for the landmark designation of the house was overwhelming. It was evident not only through the full house at the meeting, but also by the 200+ letters that were sent to the city to be recorded in support of the designation, from all over the nation, and one even from Germany. No one from the owner’s team attended the meeting.

Another exceptional part of yesterday afternoon’s meeting was the staff report on the David Wright house and its famous architect, Frank Lloyd Wright. Kevin Weight, the lead Phoenix historic preservation planner, gave an excellent presentation to educate the members of the audience and members of the commission about this building and it’s significance. Click here to take a look at Kevin’s report.

The number and caliber of the people who stood and spoke in favor of saving the David Wright House as a master work of architecture and as a piece of art was astounding. They were exceptionally eloquent and passionate so I thought I’d share their names and some of what they said with you. Please note, these are not direct quotes, but paraphrases of what was said.

Although several of Wright’s built works have been lost through natural disasters, neglect or deliberate destruction, no Frank Lloyd Wright building has been demolished in the last 40 years. Built in 1950-52, the David Wright House is the only private house by Wright based on the circular spiral plan of the Guggenheim Museum in New York.

David Mahoney – Architect, Faculty on the University of Kentucky School of Design, Frank Lloyd Wright Board:

Frank Lloyd Wright was America’s best visual artist – he was America’s Michelangelo. We must recognize the economic impact of Wright’s legacy in Arizona along with the culture heritage of this total work of art.

The David Wright House is a piece of poetry about its place and about its time. David Wright asked his father Frank Lloyd Wright for a house, “special from you to me”. Frank Lloyd Wright replied, “Son, you make me tired.” The ensuing house turned out to be a gift to the world. It is all about the nature of materials. It is about integrity at its place and its time. It embodies a oneness and continuity, where the smallest part is related to its whole.

The reality of being in the house is profound as opposed to just seeing it in magazines or reading about it. The placement of the ramp is not accidental, but very intentional, providing very particular views to Camelback Mountain. It is not a house to be moved. We must preserve our status in the world community by saving this house. It’s a remarkable work.

When the New York Times honored the recently passed photographer Pedro Guerrero, they chose to do so with his photograph of the David Wright House. The value of Wright Homes around the country is in the millions. In LA, the value of Wright homes in much worse condition than the David Wright House is very high and they are saved from demolition due to their historic and architectural significance. The David Wright House is in excellent condition and requires only a modest restoration. There is every chance that a new owner, where the house to be sold, would agree to a landmark designation. This is the one and only house in the world designed by Frank Lloyd Wright for his son, and we must preserve it.

The only issue before the commission is the significance of this house. There will be no building more significant than this that is likely to come before the commission. The historic landmark designation ensures that there will be time to find a solution. I’m sorry that the current owners of the house are not here to see the significance of this building. We can designate this building without the owner’s consent and keep the process going. We need a unanimous recommendation from the commission to give the Council the message of how important this is.

The neighbors of the David Wright House are very strongly in support of the designation. This building not only has an international, national, state and city significance, it has a neighborhood level significance. It contributes to the Scottsdale, Arcadia, Phoenix legacy of Wright.

Phoenix is a young city and we must preserve our heritage. The David Wright House is a work of love. If we don’t save this house, it’ll be cited against us that we are people that don’t care about architecture, art or history.

The Arcadia area was valuable and Frank Lloyd Wright knew that when he built the David Wright House there. But the value of this area, that has proven to grow over time, is part of the reason we have this threat of demolition. This is not just a house, it’s a project, and we must save it.

John Cochran – Lived in Arcadia when the David Wright House was being built:

Phoenix has a terrible legacy of demolishing historic buildings. We can’t demolish this one.

This is a masterpiece. And what do we do with masterpieces? We preserve them and open it up for people to go see it.

She was enchanted by the house when she was growing up in the neighborhood and hopes that this house will be preserved for future generations to be enchanted by it as well.

She was not encouraged to get the house designated by her lawyers because they thought it would never sell if it were designated. But she pleaded with the commission to please help designate this home now.