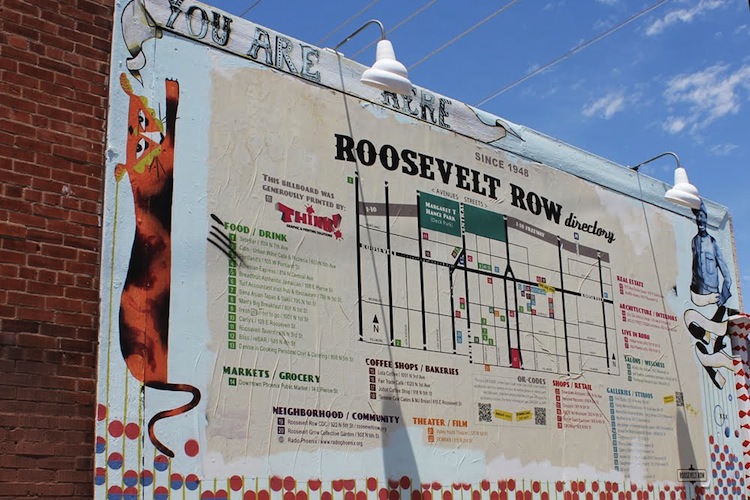 Why does it seem like developers drop down an apartment building in the urban core and overlook the rest of the area within walking distance.  Do they expect that what’s around it won’t really matter to (potential) residents?

It’s lease renewal time at Casa Awesomesauce (population 2 humans and 1 troublesome puppy), thus we’ve been looking around and weighing our options before committing to another 12 months at our current residence.  Truth be told, there have been a few interactions with the new management company that didn’t go the way we would have liked them to, and for the amount we pay, we want to make sure we’re getting the best value available.  I really want to find a place to live in for at least the next two years before I re-assess staying in Phoenix. #YuppieProblems, right?

The problem I’ve run into is that we’ve viewed a number of apartments, townhomes, or condos that had some great positives, but lacked anything really going on outside the walls. No matter how great your floorplan is, how reasonable the rent is, or how good your pool looks, if there is nowhere I’d want to be within a five minute walk of your place, what’s going to keep me there?

Basically, what makes this feel like part of a neighborhood with an identity and vibe I want to be a part of? Is there actual propinquity and idea exchange going on, or is it just a bedroom community that’s indistinguishable from 20 others around town?

Four years ago I moved from Midtown to Roosevelt Row, and from day one the difference was so much more that just a new apartment and a closer coffeeshop.  In my old neighborhood there was a pub I could crawl home from, a convenience store at the intersection, and that was about it.  Now, walkability and a sense of place permeate my everyday. Sure, I’ve lamented a number of things in the time I’ve lived down here, but it mostly comes from a place of “we’re this close to something really great, let’s just fix these items and then…”.  Admittedly, I knew going into this process that it would take a pretty spectacular offer to lure me away from the neighborhood, (I was even expecting to pay more to find a place that was nice enough to make me convert), but I didn’t imagine I’d be staring into such a void.

Of course, every place we tour touts the Light Rail, proximity to Chase Field, theatres and other event destinations, then tries to vaguely sell us on their take on urban living, even after I tell them that I’ve been living on Roosevelt for years now. The pitch rings hollow though when you ask about what’s nearby.  A few examples:

Agent: “We’ve got retail on the ground floor”
Me: “Oh, you’ve got retail?”
Agent: “Well, our office is the only retail I suppose….”
————
Me: “Where do people go to walk their dogs around here?”
Agent: “They go right outside the gate.”
Me: Observes “outside the gate” is just the sidewalk, a gutter, and the street, then a series of offices.  Contemplates a year spent making the dog stand in the gutter.

(What’s funny is that the place where this last interaction happened was actually a property built-up as part of the transit-oriented development meant to bolster things along the light rail…except the only non-residential place within 5 minutes of this building is a museum and a dentist’s office. Talk about enticing!)

-Anything green.
-Any kind of local business
-Any kind of second-place (restaurants, coffeeshops, bars, etc)
-Guest parking (street-level or otherwise)

Really, what I’m talking about though, goes beyond an expected sales pitch not matching reality.  Where I live right now I can walk around and meet most of my day-to-day needs.  Even better, my neighborhood right now makes me want to walk around, it makes the idea of getting in a car to get from one island to another seem unnecessary. Grab a coffee, get a sandwich, go see a movie, meet up with friends, walk the dog, or just ride my bike around and see what I find; these are all activities that make me feel like I’m living in a place, not just an address that could be plopped down anywhere.

Is this lack of vibrancy a compromise/baby-step we have to pass through as we “lure” folks from the suburbs to the urban core?  “Hey look, it’s sorta just like your massive gated community where nobody knew their neighbors or spent time on the block, but without the freeway time.”  Or have we just not had enough residents demand something more?  Maybe we’re telling them that we’re ok with paying thousands a month for a place to hide instead of a place to thrive.

Just in case, I’ll tuck in a little list here of ways to make places people want to live in.

Things that make me want to experience a neighborhood

– Structural Character along the block. (For me that’s easily brick buildings, and especially brick pavers)
– That bit of trees and grass between the sidewalk and the street.
– Storefronts close to the street/sidewalk, not recessed behind a parking lot or with entrances on the side only
– Public Art!
– Actually seeing other residents
– Zero high walls or gates keeping the public away from the living space.  If I need a wall around my home, do I need a moat too?

In fairness, I suppose I cannot fault those who were willing to invest in the urban core before it has proved itself over and over.  But, man, do I wish there were more choices along the core.