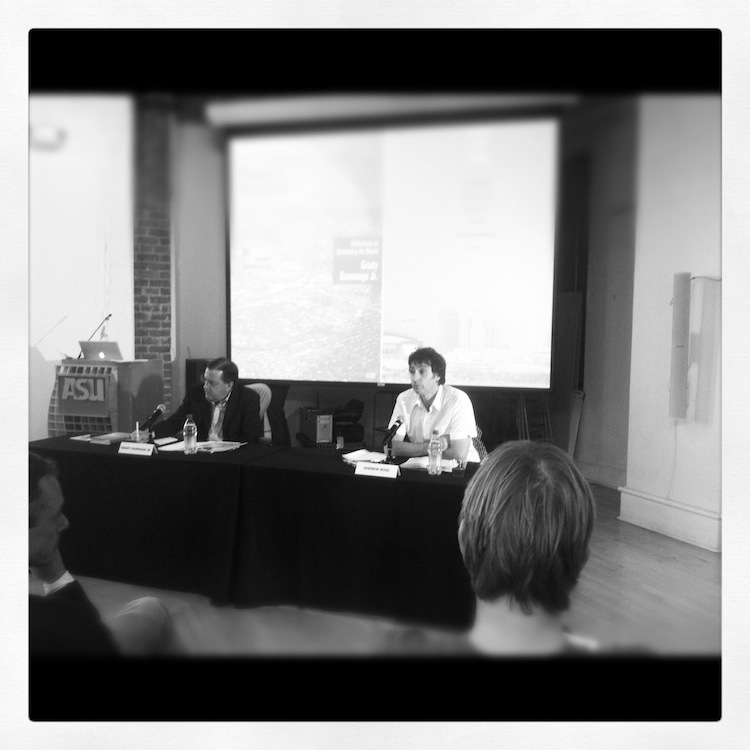 An Interview with Andrew Ross, author of Bird on Fire: Lessons from the Least Sustainable City in the World, Part II

A while back I interviewed Andrew Ross, the author of Bird on Fire: Lessons from the Least Sustainable City in the World about his book and about his views on Phoenix. I published the first half of the interview on Monday. Below is the second and final part of the interview:

Blooming Rock: What are some lessons other cities around the world can learn from your book about Phoenix?

Andrew Ross: I think (they can learn from) this pattern of eco-haves and eco-have-nots, which I saw in Phoenix in a very starkly delineated way. It’s a profile that exists in many markets, but perhaps not so starkly as in the Phoenix metro region. If readers are able to take that profile and see if it fits their city then they might have a different map or a different lens with which they will see their city and conclude that hese are common challenges. Ideally that consciousness might lead to the way they think about sustainability planning. New York City’s sustainability plan, for example, is entirely focused around the assumption that there will be a million more people living in New York City in the next decade or so. So it’s tied to the idea of growth and it sees its resource challenges through the lens of growth. So that’s a very good example of perhaps something to avoid. In addition there was no public testing of a sustainability plan, it wasn’t a result of a lot of citizen participation. The most successful sustainability plans are, like the ones in Seattle and San Francisco. And I noted that Mayor Gordon and his Green Phoenix Plan was something that was cooked up by his administrators and some of the sustainability administrators at ASU and really it wasn’t road-tested in any way. It didn’t go through any of the Village Planning Committees or any public forum and that seems to be not a good thing, given how much useful knowledge and innovative ideas that people have who are likely to attend these forums. In some ways, the Futures Forum which Terry Goddard did when he was mayor of Phoenix was a great model in that regard. It went on for something like 18 months and an extraordinary number of people participated in it. I think the folks who are attending the Village Planning Committees tend to be the usual suspects.

Blooming Rock: Are you planning a follow-up book to check the progress or lack thereof in Phoenix?

Andrew Ross: It’s a little too early to commit to that. Ideally the discussions that the book generates will inspire folks within Phoenix itself to follow up with that kind of work. I’d be very happy to see that happen. I think I mentioned that several people wrote to me and thanked me for writing the book from Phoenix and said that only an outsider could have written it. Now I don’t know if that’s true or not. But a follow-up book might be better written by an insider.

Blooming Rock: I also want to thank you for writing the book. It was a really great education for me. I learned a lot. I live here, but I didn’t know a lot of that stuff. I also appreciate your conclusion that we’re going to change the city based on a social agenda, not on a technological one. And with the whole social equity issue, you really highlighted what a huge problem we have here with the haves and have nots. I never even really thought about that in the work that I do. So thanks a lot for that. It expands our horizons and it really shows where the work needs to be done.

Andrew Ross: Thank you for your kind words. I do think that that perception of social equity is an under-appreciated one in the sustainability field that has to be more in the forefront. And especially when City Hall puts together its next sustainability plan, which presumably, Mayor Stanton’s administration is working on, that it’ll be a plan that doesn’t simply see itself as a vehicle for economic development or for cost avoidance, which are usually the two vehicles that mayors see sustainability in terms of. Rather, (it would be great if they saw it) as a vehicle for civil rights and as a vehicle for civil rights. I don’t know of any American City Hall administration that has really taken on that challenge. And if Phoenix were to do it, it really would be an extraordinary step forward. Even just to frame it that way.

Blooming Rock: You know, Mayor Stanton has read your book so I think it’s possible.

Andrew Ross: Yes, the rumor is that he’s read it.

Photo Credit: Andrew Ross and Grady Gammage at a debate during Phoenix Urban Design Week. Photo by the author.