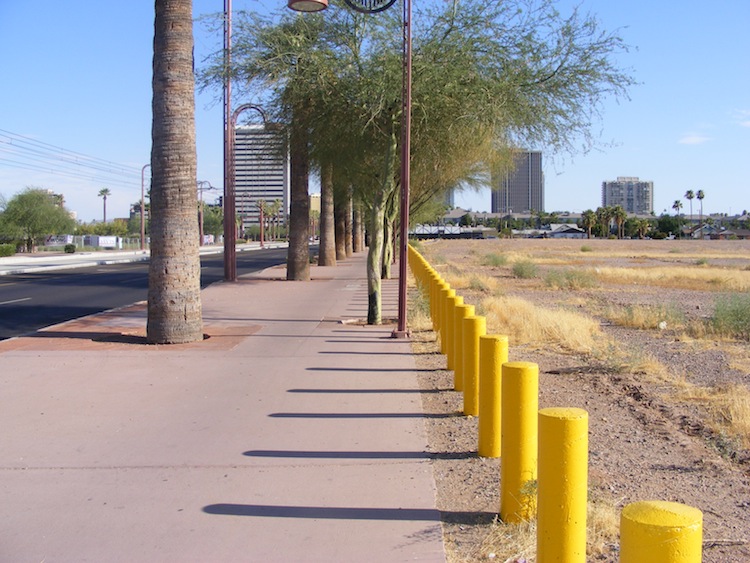 Why is Walking such an Alien Experience in Phoenix? 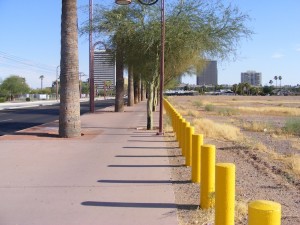 Last week my friend Kevin Kellogg, the urban laureate at the Stardust Center, and I needed to find a place that was showing the World Cup semi-final match between the Netherlands and Uruguay.

I was, as usual, officing out of Lux Coffee Bar that morning.  Kevin suggested we watch the match at George & Dragon (G & D), the British pub on Central north of Indian School.  It’s a classic venue to watch the World Cup.

It occurred to me that Lux was close enough to G & D to walk!  I know this should not have been such a revelation, but not having walked the city much, I have almost no notion of how far apart things are in terms of walking distances.  Not being sure if it was a five or a ten minute walk, I decided to bite the bullet anyway and ventured out at around 11:15am.  Keep in mind, it must have easily been over 105 degrees by that time.

It turns out G & D is only a 5-minute, well actually, more like a 3- minute walk away from Lux, in case you ever have to make the trek for yourself.  But be forewarned, the short walk is quite strange as you have to traverse this big empty lot surrounded by yellow bollards along the way.

This is so typical in Phoenix – the empty lots that have poked gigantic holes into our urban fabric.  No wonder people don’t like to walk here.  A 3-minute walk can seem like an eternity when you’re surrounded by hot pavement on one side and just an empty  lot on the other.  It’s true that this stretch is actually more walkable than most in Phoenix due to the line of trees and the ample sidewalk.  But these efforts towards walkability disappear when adjacent to a large empty lot.

Sadly, empty lots and the general lack of interest on the pedestrian scale are a result and also what perpetuate the car culture in Phoenix.  You can walk for miles and miles in other cities such as New York and San Francisco and not realize it because the city is scaled for pedestrians.  There are various items of visual interest, storefronts, parks, benches, right-sized sidewalks and streets that all cater to the speed and scale of a pedestrian.  And there are very few holes in the form of empty lots like the ones we have in Phoenix.  And therefore, it seems natural to walk in those cities rather than to drive.

Here in Phoenix, even in Central Phoenix, the supposed urban core, the opposite is true: it’s more natural to drive than to walk.  Even my short walk to G & D from Lux seemed out of place.  I know you’ve heard me complain about our car culture before and you may be wondering why I keep harping on this subject.  But don’t you think we should keep questioning why walking is such an alien experience in Phoenix?

Leave a Reply to Jose Gonzalez