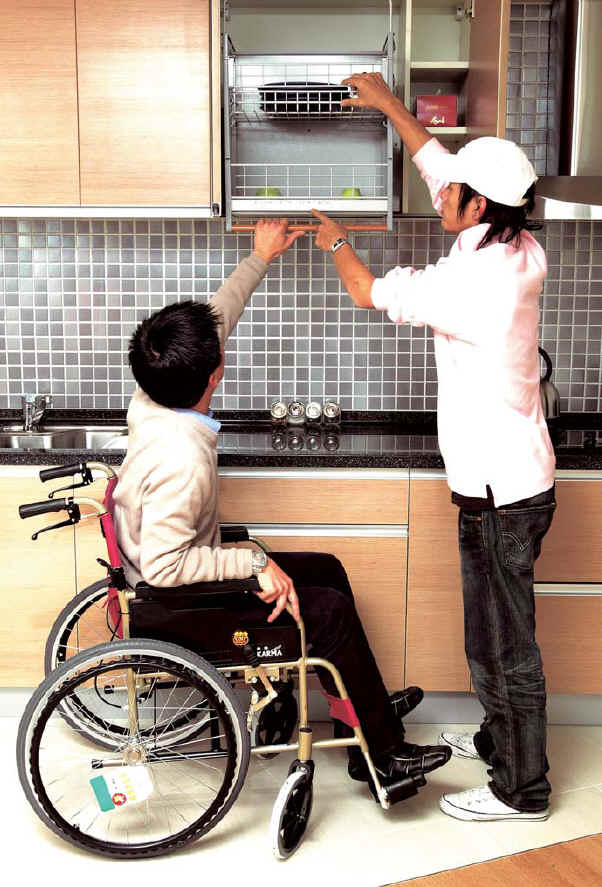 A Primer on ADA and Why it’s Important to Design 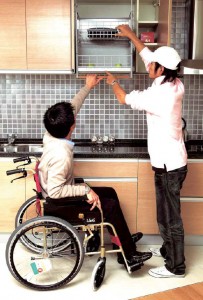 Do you have people in your life with disabilities?  I do.  My mother, as she has aged, has experienced a considerable decline in her mobility.  She often uses a wheelchair and a walker when she is out and about.  I sometimes push my mother’s wheelchair when we are out together and whenever I do, I become instantly aware of ramps to sidewalks and to entrances of buildings.  In those times, accessibility becomes an immediate reality, something I have to negotiate with personally, instead of the abstract notion that many times serves as a hindrance to architects and designers.

Accessibility issues have touched me again as our next tenant at 3 Palms has a walking disability.  She is able to walk, but uses crutches for stability and has trouble stepping over the four-inch threshold into the duplex.  She purchased a portable ramp that she’s installed in some of her other apartments, but since the ramp would be too long to work for the duplex, she suggested we add a grab bar at the entrance and back doors.  These would give her something to hold on to and give her balance as she steps over the threshold.

This got me to thinking about universal design and the importance of designing spaces for people of all abilities.  The Center for Universal Design defines universal design as “The design of products and environments to be usable by all people, to the greatest extent possible, without the need for adaptation or specialized design.”

Today I’m going to focus on one aspect of universal design and that is ADA.  Having worked in architectural offices for over ten years, I remember being annoyed that I had to design a five-foot diameter clearance for wheelchair accessibility inside public bathrooms.  This always made the bathrooms gynormous and often took space away from other, more important parts of the building.  It’s not uncommon to find architects and designers that complain about ADA, or the Americans with Disabilities Act.  Wondering what ADA is?  Below is a primer on ADA if you don’t know much about it:

ADA is not part of the building codes.  It’s a federal regulation.  If a business does not comply with this regulation, the owners of it can get sued.

Click here for the actual ADA Standards for Accessible Design.

Who has to comply with ADA?

According to ADA.gov,”The Department of Justice’s regulation implementing title III of the ADA, which prohibits discrimination on the basis of disability in ‘places of public accomodation’ (businesses and non-profit agencies that serve the public) and ‘commercial facilities’ (other businesses).’

This means that pretty much any place that is open to the public must comply with the ADA regulation.

Yes, there are times when ADA guidelines are too stringent or heavy-handed.  But the spirit behind ADA, which aims at the “elimination of discrimination against individuals with disabilities” is indeed a noble one.  I have a special appreciation of it having lived in Africa and having visited other third world countries (and even first world countries in Europe come to think of it), that pay no attention to accessibility for people with disabilities in their built environments.  As it was in the US before 1990, if you had a disability, you had to deal with not being able to get around in public spaces.  It would be better to stay home rather than to try to negotiate the built environment before the advent of ADA.

So it’s the spirit of the ADA that I would like to remind architects, designers, and developers of when they roll their eyes at some of the guidelines they have to follow and spend money on.  Mandating accessibility in public spaces is a very good thing and you never know when it will benefit you personally, either in your own life or in the lives of your friends and family.

Now where does ADA come in when retrofitting existing buildings, specially with historic preservation?  What happens when making a building ADA accessible compromises the character of a designated historic building?  I promise to cover that subject along with others concerning universal design here on the Blooming Rock blog.  Stay tuned!

Tell me your thoughts on ADA and any concerns or questions you have about it, leave me a comment and let’s start a discussion!