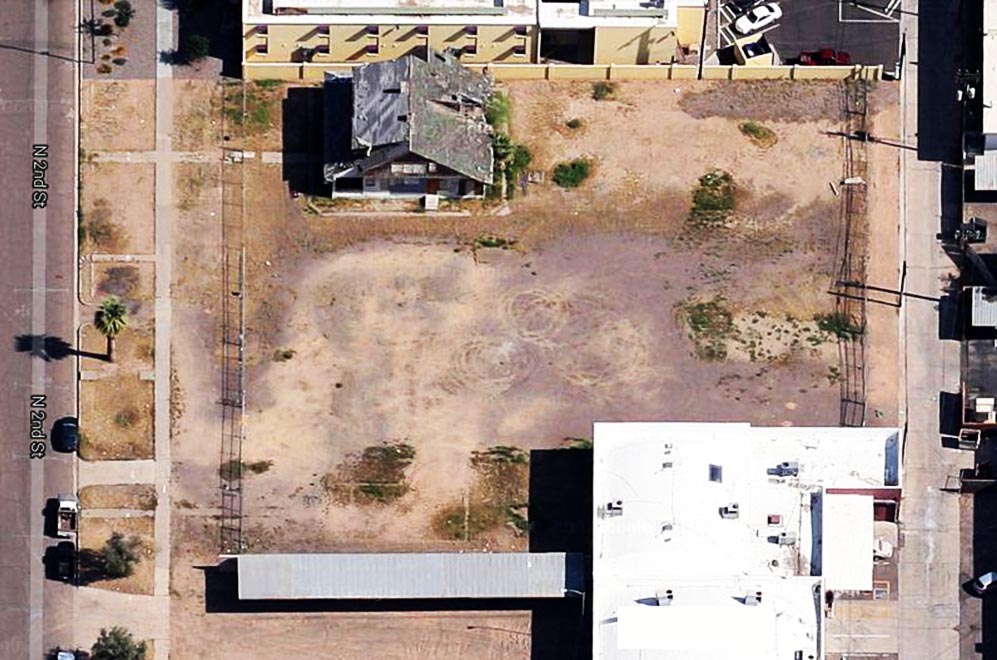 I am often the first to criticize real estate developers, especially if they are so focused on the bottom line that they are willing to cut corners in ways that negatively impact the community. There are a lot of profit-focused developers out there that have detracted from a healthy and vibrant urban fabric. But, there are good, conscientious developers out there too who do projects with the community in mind. In the Phoenix metro area good developers who’ve done projects that greatly benefit their communities include Venue Projects, Sloane MacFarland, and Desert Viking Companies, to name a few. Fairly new and unknown to the development scene in the Phoenix-metro area is Urban Development Partners.

Who is Urban Development Partners?

Urban Development Partners (UDP), headed by partners Todd Marshall and Charles Huellmantel, is responsible for building the type of product Phoenix has been looking for to jump start a new direction for the city – transit-oriented and mixed used development. Thus far, they have delivered Encore on Farmer in Tempe and now Encore on First in downtown Mesa, both dense, transit-oriented housing developments. These developments offer seniors a new way of living – the urban lifestyle where they don’t have to rely on personal transportation. This is a big deal in Phoenix, which is such an automobile-oriented city and there aren’t a lot of housing options that allow for a car-light or car-free lifestyle.

These projects also serve as affordable housing for seniors, where people who live there can’t exceed a certain income. At first, some in the cities of Tempe and Mesa were skeptical about how bringing affordable housing to their city centers would do to their images.

Since there is no built-in rental assistance, at either Encore on Farmer or Encore on First, residents must not exceed the maximum income, but like market rate rental also need to demonstrate a minimum income, which is quite helpful to those on a fixed income. UDP’s housing developments have added much needed urban vibrancy to the respective city centers and will be catalysts for more arts, culture, and retail spaces. A recent Americans for the Arts study shows that a whopping 43% of the cultural audiences in Phoenix are over the age of 65. Bringing seniors to downtown Phoenix will boost the arts and culture scene, not deplete it.

What’s the deal with The ROW?

Some people questioned the city process of selecting UDP saying it wasn’t transparent and did not include the community. However, both the the Roosevelt Action Association and the Evans Churchill Neighborhood Association assert that the city’s selection of UDP and its proposal was in fact a transparent and inclusive process.

“We support the process that set a defined and publicized criterion and then allowed for the public to bid on a concept. From what we have gathered, this process was completed in a professional, confidential, and effective manner.  Thank you for your conduct and the processes that allows for threatened sites such as the Knipe House as well as avoiding speculators to sit and hold the site,” says Mark Davis, president of the Roosevelt Action Committee, in a letter of support to the City of Phoenix. And Kevin Rille, the president of the Evans Churchill Neighorhood Association has also spoken up in support of the selection of UDP and their proposal, saying,

“A process for the development of City owned parcels in neighborhoods such as ours is important. In this case, having defined requirements set out in advance publicly, accepting resultant proposals from a variety  of developers, and then having them reviewed by a diverse panel of stakeholders appears both sensible and  equitable. For the L.G. Knipe House and associated properties the process was completed effectively, with integrity, and by a competent panel with relevant background, expertise, and keen interest in the future of our neighborhood and downtown.”

The proposal is for the adaptive re-use of the Knipe House, construction of a new building to brew craft beer, a dog and bike friendly beer garden and designated areas for local artists to display their work.  Also included are multiple residential buildings including a 5-story building for independent seniors. The ground floor units will be designed as live/work artist studios.  The residential units on the east side of 2nd will have no age or income restrictions. The proposed development also includes a significant enhancement of both sides of 2nd Street along the project edge with additional onstreet (diagonal) parking and pedestrian friendly sidewalks with no vehicular access from 2nd and abundant shade.

What’s the deal with the petition against The ROW?

There is a Change.org petition against The ROW development that starts off by asking – “Are you allowed to be here?” How a mixed-use, mixed income, and multigenerational housing development such as The ROW prevents anyone from being in the area is a mystery.

It also asks – “We all grow old but then why when we reach a certain age are we isolated and insulated from our own community?” In fact The ROW is giving seniors the option of living in the city, amid people of all ages, instead of out in the suburban senior communities that are so prevalent in the city.

It goes on to state, “The City of Phoenix Office of Community Development recently stated they intend to recommend the award of city owned land to a developer whose proposal outlines RESTRICTED senior only housing. If this award is made, anyone under the age of 55 years old would NOT be allowed to live in this 2 city block project.” The ROW is not restricted to senior only housing. The lease holder of the age restricted building must be 55 but it does not affect other household members. There are portions of the development that offer housing options to people of all ages. So the statement that people under the age of 55 years would not be allowed to live at The ROW is false.

I urge you not to sign this petition. It is riddled with false and sensational statements and is working against a project that promises to be very good for the future of downtown Phoenix.

Why Phoenix can’t afford to squash The ROW

Downtown Phoenix is filled with empty lots that continually stall the creation of what could otherwise be a bustling downtown where people like to hang out even on the evenings and weekends. All the people who have dedicated themselves to making Roosevelt Row into a vibrant arts district that attracts people of all ages, incomes and background, like Cindy Dach, Greg Esser and Wayne Rainey, deserve a lot of credit for making downtown a better place. The ROW is the next level of revitalization that the area needs that will only build on the foundation of what the arts district has put in place. The ROW is a project that will actually deliver new residents, a thriving 3rd place, and will be the initial phase of the promenade leading to the revitalized MT Hance Park in the next few years. It is to be built by conscientious developers with an excellent community track record, and is designed to be transit, pedestrian, and bike friendly.

Thus far, that lot has sat empty for decades, creating a vacuum that sucks energy generated by the exciting activity going on around it. Now, there is an opportunity for this vacant lot to become a fantastic mixed use development that will improve the urban experience of the entire area.

If Phoenix wants to grow smart, not just grow out, then developments like ROW are exactly what the city needs. According to Smart Growth Online, “growth is ‘smart’ when it gives us great communities, with more choices and personal freedom, good return on public investment, greater opportunity across the community, a thriving natural environment, and a legacy we can be proud to leave our children and grandchildren.” The ROW gives people a choice that is not widely available in Phoenix – quality, transit-oriented, affordable housing in downtown Phoenix. And it gives people more personal freedom because it enables them to rely on their cars less and be able to get around using other modes of transportation. It gives greater opportunity across the community as it adds people to the mix that will patronize local galleries, museums, music venues, coffee shops, restaurants and retail establishments in the downtown community. The ROW could be a project that catalyzes other dense, mixed-income, transit-oriented housing projects in downtown Phoenix, and what better legacy for the area than that?

The ROW promises to help take downtown Phoenix to the next level. Let’s not stop the positive evolution of downtown because of false propaganda. This is a solid development that will help the area immensely. It may not be everything to everyone (what is?), but it is a big step forward and fills in a gap in a downtown with many gaps to be filled. Squashing this development will just mean squashing the forward momentum that is happening in downtown. There is a City of Phoenix subcommittee hearing regarding this project happening on December 4, 2013 at 9:30am at City Hall on 200 W. Washington. Get involved and show your support for The Row!

Tags: Downtown Phoenix revitalization, The Row, Todd Marshall, Urban Development Partners
« The Architect of Camelview Theater and Why the Building is Architecturally Significant Afterall  |  Livability 101: Living Without a Car in the Freezing Cold »