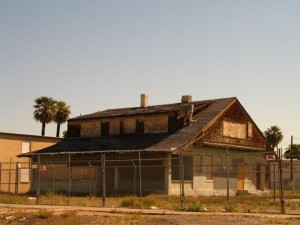 Bob Graham on Why the Leighton Knipe is Worth Saving

Last week I posted my point of view about why not all old buildings should be saved.  I used the Leighton Knipe house as an example of an old building that isn’t necessarily worth fighting for.  But a few people in the historic preservation community disagreed with me.  One of the people who’s spoken out about the Leighton Knipe house is Bob Graham, a local architect doing important work in historic preservation and other urban projects.

I interviewed Bob to get his point of view about why he thinks this building is important and why it should be saved:

Blooming Rock: Why do you think the Leighton Knipe house is significant?

Bob Graham: The house is significant because it was the home of L.G. Knipe, early structural engineer and architect, when he worked and lived in Phoenix.

Leighton Knipe was an enigma.  He has buildings to his name across the valley, large and small, dating from 1909 through about 1936. People familiar with Phoenix’s architectural history might recognize names like Lescher & Mahoney, Fitzhugh & Byron, H.H. Green, and James Creighton, but L. G. Knipe is less familiar. It seems he was a soft-spoken kind of guy, not a showboater and not particularly connected politically. But the list of buildings attributed to him is significant, and after you have seen a dozen or so Knipe buildings you start to see his hand in others that could have been his work.

The house was his first work in Phoenix, designed for his parents. He soon moved in himself. He also had his office in the house for a while. So the house represents an architect who had a pretty big impact on Phoenix, but about whom much more is to be learned.

Blooming Rock: Why do you think his house should be saved?

Bob Graham: People (mostly newcomers) often complain that Phoenix has no history.  They say that Phoenix never had a sense of place – that we need to create one that is all new. Those people have not been looking at old photos of Phoenix in the teens and twenties.  Despite the summer heat, Phoenix was truly a livable city, with plenty of shade, well grown-in, and with a distinctive regional architecture appropriate to living in the desert. Today, struggling to make Phoenix livable again, we seem to have lost the knowledge of how to do that which was just common sense 100 years ago.

Saving the Knipe house won’t make people suddenly appreciate the history of Phoenix. But part of the reason that Phoenix is seen as a rootless place that’s all new and modern is that we have lost so many other significant buildings. Having the Knipe house around would provide an opportunity to tie together a piece of Phoenix’s architectural past in a way that is interesting and engaging.

Another reason to save the house, as well as other old buildings, is simply to create a fine-grained urban environment that has variety and interest.  Our central city abounds with examples of “urban removal” where blocks have been cleared for new developments. The result is often sterile and corporate. Think of the ballpark, the arena, Civic Plaza, and the Mercado.  They may be big, shiny and new, and when there’s an event, they may be busy. But when they are closed, there is a giant dead zone. That might be OK for an auto culture, but not if you are trying to promote a walkable urban environment. Including smaller, older buildings as part of redevelopment creates a counterpoint to the sameness of modern architecture and tends to break up the big developments into smaller, more human and pedestrian scaled pieces.

I believe in preserving your options. A lot of buildings are torn down because they are perceived as a liability, even when there is no immediate plan for development. As long as I have the room, I’d rather keep that grungy old sweater in my closet – you never know when you might need it.

Blooming Rock: What will we have lost if this house is torn down?

Bob Graham: We will have lost an opportunity to enrich our culture and to make downtown more interesting.  A little piece of our collective history, which is part of what builds community.

Blooming Rock: If the Knipe house is saved, what do you envision it being used for?

Bob Graham: The original proposal was to use it as a specialty restaurant – wine and cheese bar, coffee house… something like that.  It would have been a focal point of the condo project that was designed to go around it on the vacant land.  The restaurant use could still work, even without the condo project, as could a retail or office use. Maybe an architect’s office! Are you looking for a place?

Blooming Rock: What do you think the criteria should be in determining whether a building is worth saving?

Bob Graham: The National Register criteria are still a pretty good way of determining whether or not an old building is important to save, either architecturally or historically. That may sound technical, but it’s what we have.  I also think that the issue is bigger than “historic”. There are a lot of buildings that have plenty of life left in them, or which may be good design. So I would add things like embodied energy or artistic merit, even if a building is not that old.

Certainly economic feasibility has to be part of it. If a building g is “too far gone” it may not be something to fight for.  But often things that look infeasible at first can be creatively financed through grants, tax credits, façade easement donations, or other incentives.

I’m not an absolutist. There are times when preservation has to take a back seat to bigger issues. But for the Knipe House, I don’t think the time has come to pull the plug.

FYI, from our 2006 report on the building, here are Knipe’s “known works” (click here to view).  There are probably many unknown works.