A developer by the name of DTR 25, LLC is applying to partially abandon an alley south of Fillmore Road between 1st and 2nd Avenues in Downtown Phoenix for the purposes of “future development”. The abandonment of this alley has future implications about walkability, how buildings will deal with their back-of-house needs, and the possibility of getting yet another surface parking lot in Downtown. 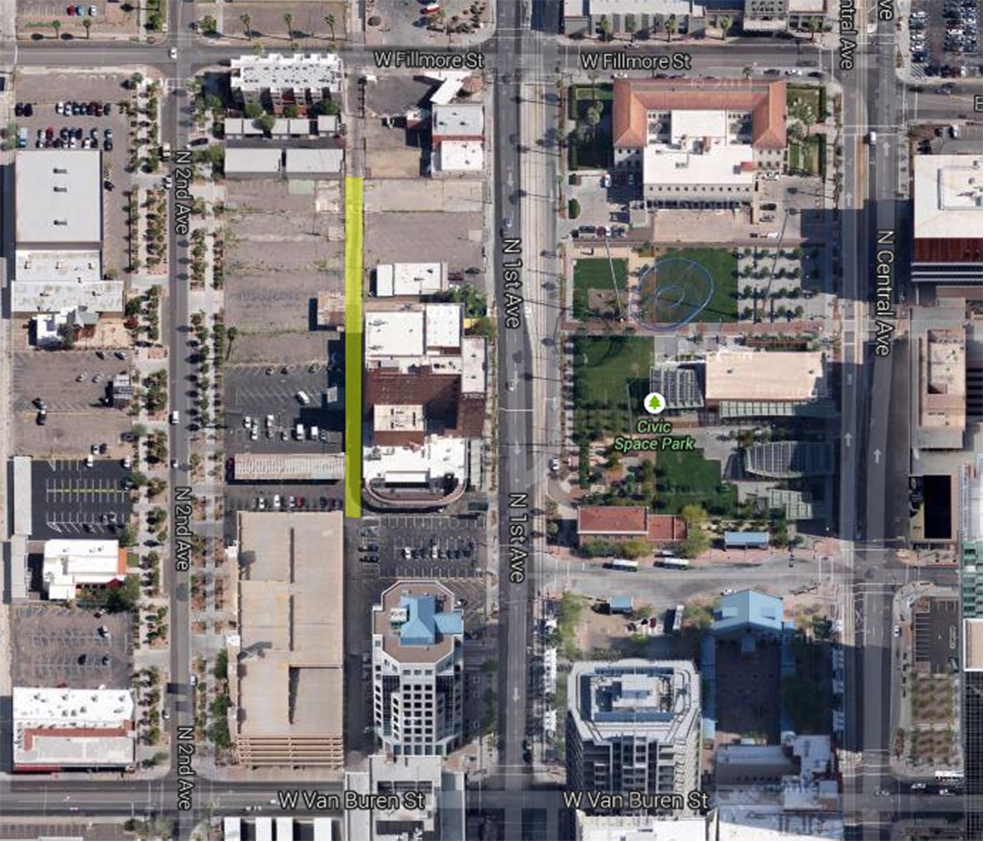 John Glenn is a project manager at CCBG Architects and vice chair of the Central City Village Planning Committee. Last year, he served on the Downtown Code subcommittee of the Design Review and Design Standards Committee last year, which was assembled to vet updates to the Downtown Code.

Glenn thinks that the abandonment of the alley would be bad for downtown and should not be approved. This is why:

“With any abandonment process there isn’t a requirement to submit specific development plans so the applicant could effectively say they want the abandonment for one thing and change it later, so there is less accountability. The communities concerns are basically three fold:

1) Abandoning streets and alleys in our downtown is generally a bad idea 90% of the time, especially when the entire block isn’t assembled and the abandonment is only a partial block. In urban settings inevitably development needs a back-of-house where the unsightly elements have to go (trash, loading, parking etc). When we abandon alleys, those unsightly elements typically get relegated and greater emphasis of those is placed at the urban street side.

2) The downtown code explicitly talks about a Paseo in the Van Buren Neighborhood Place Type, This Paseo isn’t described in high detail in that policy document but its purpose is clearly laid out for pedestrian use and access, i.e. walkability. That Paseo alignment cuts north of the YMCA west to this alley and south and cuts across to 2nd ave. This abandonment flys contrary to what the Paseo is supposed to be. Why would someone abandon an alley and turn around and dedicate it for this Paseo as explicitly laid out in the ordinance?

3) The parking lot issue arises here in a little convoluted way. Right now the parking lot & the YMCA are not contiguous in assemblage. I think its Troon that is trying to redevelop the old YMCA apartments. The YMCA currently doesn’t own the parking lot that fronts 2nd. However, by linking up the YMCA properties and this parking lot through this alley abandonment, they now have a contiguous assemblage and the parking lot can function as an accessory use. If the parking lot were to stand on its own that would be a primary use and it would trigger a use permit and a time stipulation as the downtown code lists primary use surface parking lots as interim. The community obviously doesn’t want more permanent surface parking lots, we want to see and encourage redevelopment downtown. Let alone the fact that surface parking lots don’t advance the community values we all want for downtown (mixed use, shade, walkability, less emphasis on cars etc). We feel this particular abandonment is suggested to circumvent the use permit process for parking lots. Without that use permit with a time stipulation that parking lot could conceivably run into perpetuity. But to decimate facts here; they are not intending to park actual cars in the space that was the alley, or at least not from what I can tell. I realize it’s a highly technical concern here.”

Katherine Coles, the City of Phoenix Central City Village Planner is in Opposition of Abandoning the Alley

Katherine Coles, the City of Phoenix Central City Village Planner is recommending denial of the request to abandon the alley. She cites the following reasons in the staff report:

The Taylor Street Pedestrian Paseo traverses a portion of this alley (north side of YMCA). A 20-foot wide public pedestrian easement (Paseo) would need to be dedicated in accordance with the approved alignment (1209.C.). Abandonment of this alley would likely necessitate access to the adjacent sites to be solely from the pedestrian streets. Additionally, loss of access through the alley will severely hinder refuse pick-up for adjacent properties as well as properties yet to be developed. 2nd Avenue adjacent to this request is the site of significant City of Phoenix and federal transportation funds investment for the 2nd Avenue Pedestrian Streetscape Enhancements. Additionally, 1st Avenue is likewise a pedestrian street which also has light rail. The City of Phoenix and federal investment in this transportation and pedestrian infrastructure is also significant. Provisions in the Downtown Code are designed to protect these investments and the City’s liability to the federal government for the improvements. Therefore, the City of Phoenix is unlikely to support utility relocation to 1st or 2nd Avenues, or refuse pick up and other service related activities to 1st or 2nd Avenues, which are highly improved transit and pedestrian streets.”

The hearing to approve or deny this application to abandon the alley south of Fillmore, between 1st and 2nd Avenues, is tomorrow, Wednesday, July 17, 2013 at 10:00 AM Conference Room 10E located on the tenth floor of City Hall at 200 W. Washington Street. Show up and put your two cents in!

Tags: alley abandonment, Downtown development, downtown form code, phoenix, surface parking lot downtown, walkability downtown
« Bike Share in Phoenix: This is going to be big!  |  Can we Keep Earth from being the Next Krypton? Sustainability Lessons from Man of Steel »