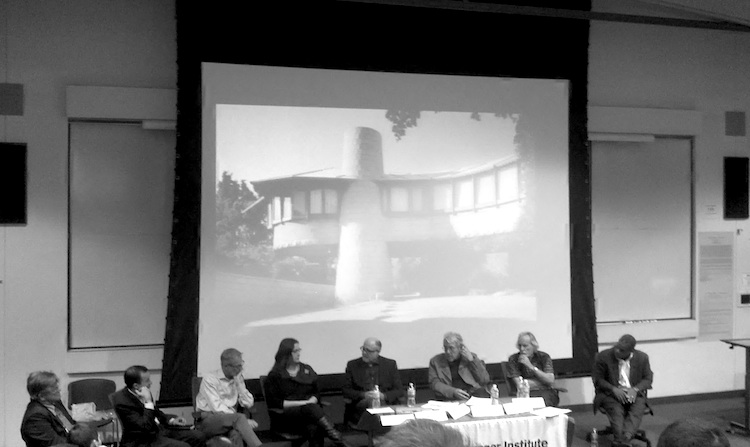 In a multidisciplinary panel discussion held Monday night at the College of Design North building on the ASU Tempe campus, a group of design and development professionals shared their takes on the greater issues behind the ongoing push to preserve the Frank Lloyd Wright-designed David and Gladys Wright House in the Arcadia area of Phoenix.

The discussion was moderated by Craig Barton, director of the Design School that is part of the Herberger Institute for Design and the Arts. Speakers included practicing architect and ASU architecture professor Paul Zygas; director of the ASU Master of Real Estate Development program Mark Stapp; real-estate agent Scott Jarson; Frank Lloyd Wright School of Architecture dean Victor Sidy; Modern Phoenix founding editor Alison King; architect Will Bruder and Frank Henry, an architect who worked with Wright. Each panelist spoke from his or her professional insights and respective background of knowledge on the significance of Wright’s body of architectural work.

Henry and Zygas introduced the building as a home that was specially designed by a father for his son. Zygas said the house shows evidence of Wright’s “tinkering” with floor plans, most notably in its curvilinear form. It is unique from his typical rectilinear floor plans and preceded the spiral shape of the Guggenheim Museum in New York.

“(The house) is a variant on the in-line fireplace plan that he was working on since the 1870s,” he said. “The living room would have the principal view.”

The house is deliberately sited with a view to the north of orange groves and Camelback Mountain. Zygas pointed out that the structure interacts with its surrounding landscape via buttresses that give the house the appearance of hovering on the site.

The reason the panel was formed is a general lack of awareness about architecture, Henry said, specifically of Wright’s contributions to the practice.

“The public needs to be brought to a level of education that all of you are at,” he said, referring to the audience of preservation advocates, concerned neighbors and ASU design students. “When you look at the history of the world, this is a young country. We have some wonderful musical composers, but we don’t have Beethoven. We have some very great playwrights, but we don’t have Shakespeare. If you look at architecture, Frank Lloyd Wright is considered by many across the world to be the greatest architect of the 20th century.”

Panelists remarked throughout the unfolding conversation that they were “preaching to the choir” about the importance of preserving historically significant pieces of architecture. They explained they believe the house to fall under this category because of its close connection to Wright and its unique expression of living comfortably in, yet harmoniously with the desert climate he was known to be inspired by. Sidy said the house exemplifies Arizona’s architectural heritage and can teach us about designing in our climate. With this understanding, the dialogue turned toward brainstorming how to encourage more awareness of the built environment’s impact on our sense of community and making historic preservation more viable to those who are not members of the preservation congregation. Audience members asked questions and posited their own ideas.

Jarson, King and Stapp agreed that individual property owners need to be reached out to more in order to encourage preservation in a city that is known for tearing down buildings.

“We choose our landmarks and treasures. We preserve them to remember why we came here in the first place and how we lived here, and I think this house is an example of that thinking,” Jarson said. “We must promote decisions by owners that will protect the heritage of these buildings.”

Jarson, who runs a real-estate firm with his wife, Debbie, said that in his experience, he has seen that rumors about historic designation diminishing property values are not true.

“We have to be able to illustrate the benefits that will come to owners of these properties,” he said. Later in the discussion, he talked about reshaping tax incentives for property owners who participate in the preservation process.

King said that steps were taken to ensure that the house was sold to a preservation-minded buyer by Ann Wright-Levi, one of Wright’s grandchildren, but the housing market collapse caused plans to change.

“We need to realize that our city’s preservation office is strapped for resources, and Prop 207 [a ballot initiative passed in 2006 that requires the city to obtain property owner consent before applying designation] does not make it easy,” she said. “I fear for our city’s future and our cultural heritage if we are not able to solve this pretty soon.”

Stapp said that education, culture and historic preservation are related in terms of monetary value, but hinted that not everyone makes that connection and acts accordingly. He said financial support for systems that tie development and historic preservation need to be established in order to show that keeping old buildings is financially practical.

“We do not have a mentality, from a political perspective, of investing in our community capital,” he said. “When we see things like Prop 207, we tend to blame it [for our preservation issues]. We’re a private property rights nation. One of the reasons we have the investments we do is because of them, so we can’t get mad at them.”

Sidy and Bruder expressed desire for greater public availability and recognition of examples of architectural excellence. Bruder, vaguely referencing urban design and public art, said it is important to embed a sense of design’s power throughout the entire current urban fabric in order for people to appreciate architecture’s role in history and culture.

“In my mind, it’s about the community. It’s awareness of not just a nostalgic past, but an awareness of architecture that cannot be understood from drawings or photographs, but only from real experience,” he said. “There is a tradition in the world … that we can go and experience these fragile art forms.”

The David Wright House is currently in escrow from an unnamed buyer who has intended to keep the historic nature of the house intact. What the house and this summer’s somewhat controversial historic designation proceedings and extensive media coverage of it represent for the Phoenix community is multiple opportunities to find a new way to balance our rich past with our constantly changing present.

The “Perspectives” of the panelists, as the panel was called, can help us re-examine historic preservation. We can begin to see it as an act of mutually beneficial cooperation between property owners and the greater community and avoid the stereotypical antagonism between preservation advocates and developers that seems to regularly erupt in Phoenix. It is possible to integrate our more or less common belief that time and place influence our city’s form and our experiences into historic preservation policies and development practices that enable us to act it out. The uniquely visceral practice of historic preservation is a tool Phoenix should take greater advantage of in order to ensure its identity is firmly established, valued and remembered as we continue to move toward the future.