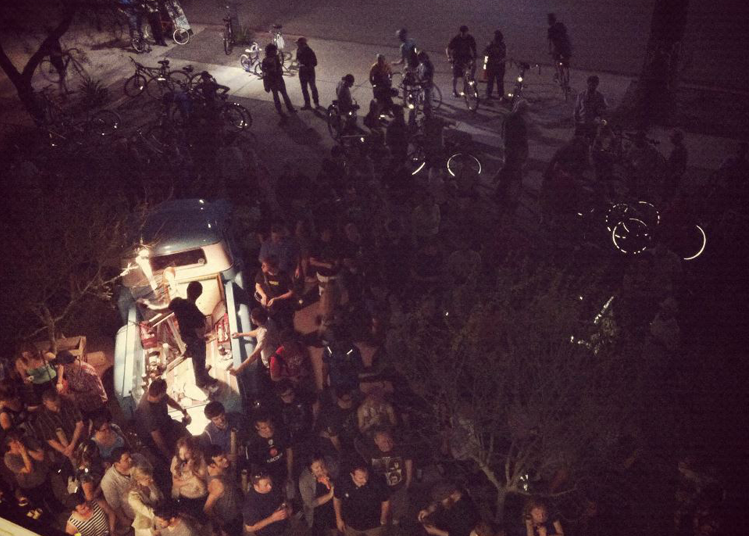 Pedal Craft and the Business Case for Bicycle Infrastructure in Phoenix

“Look, I may not have ridden my bike here, but at least I’m ready to,” I tell Joe Perez, as I point to my calf, unashamed.

An army of bike enthusiasts surrounded us at Kitchen Sink Studios.  Did somebody forget to tell the hundreds assembled at the inaugural Pedal Craft that today was only the third Friday of April – too early for the monthly Critical Mass ride?  Were they here for the beer? Art?

They were out because of the bikes: cruisers, fixies, vintage road bikes, mountain bikes.  You name it, and it was parked outside – every kind of bike, except for mine.  Used to defending my patch of road to random drivers, I was working my way out of an instinctive, defensive mental crouch.  Sans bike, the only way I could do so was to point to my smooth legs, those silent road cycling tribal signifiers.

But I really didn’t need to worry.  I was quickly absorbed into any number of conversations about gear ratios, gruppos, rims, and handlebar tape that I could rest easy.  I was in friendly territory, even though I knew less than a handful of people in the room.  It was the sheer size of the crowd that threw me off.

Were we really in Phoenix?

As evidenced by the weather appropriate attire (my flip-flops included), we were definitely in Phoenix.  That fact made the scene all the more impressive.  Our transportation infrastructure hierarchy ranks cars first, with pedestrian needs just below, and those of cyclists well beneath pedestrians.  If you’ve walked in Phoenix in the middle of summer, you know that can be a degrading exercise.  Let’s just say that bicyclists have a long way to go in this town just to get to the point where we can be as equally degraded as pedestrians.

So I considered this collective of bicyclists and their beer-fueled revelry a minor insurrection and portent of good things to come, both notions that warmed the dark recesses of my capitalist soul. After all, this motley bunch of drunken bicyclists just might come up with the crazy idea that they might need to organize themselves in search of something resembling parity in infrastructure investment.

Municipal investment in bike infrastructure might cause heartburn amongst the neo-libertarians in town but there is a straightforward economic development argument to be made for such infrastructure. Such investment simultaneously broadens access to the market (and public life) beyond the current universe of car-bound participants while enhancing the efficient flow of people, goods and ideas within the region, to say nothing of its quality of life or health impacts. Compare, for example, the 2010 per capita GDP of the Phoenix metropolitan region with that of the Netherlands. With a land mass of 16,573 square miles, the Phoenix-Mesa MSA land mass is slightly larger than of the Netherlands, which measures approximately 16,039 square miles. Yet, within a slightly smaller geography, the Netherlands beats our regional per capita GDP of $41,169 on an absolute basis ($50,355) and when adjusted for purchasing power parity ($42,183). And that ignores two factors: their overall population density and the fact that almost three thousand square miles of the Netherlands are literally underwater. The numbers don’t lie: our regional transportation system is wired for neither efficiency nor productivity.

Of course, that rough comparison can cut both ways – one could easily point out that we are an almost pound-for-pound match for the Dutch economically. But if we factor in density, our hash-loving, libertine Dutch friends beat us hands down: they have quadruple the population in an actual land mass that is almost three thousand square miles smaller than our metropolitan region. In addition to a live-and-let-live attitude that would cause the Ron Paul Army to swoon, their economic productivity overwhelms our feeble attempt at competing as a “world class” region.

Which brings me to an earlier point, often disregarded in any conversation about bike and pedestrian infrastructure: such investments fundamentally expand access to the market and public life. As a practical matter, the vast majority of Phoenix residents have no choice but to rely on a car to get to work or shop for daily necessities. Investments in pedestrian and bike infrastructure – to say nothing of investment in public transit – broaden access to potential market participants in a manner that fundamentally enhances freedom of choice.

« METRO, where’s my pay-as-you-go already?  |  How to Make Phoenix’s Warehouse District into a Premier Entertainment District »