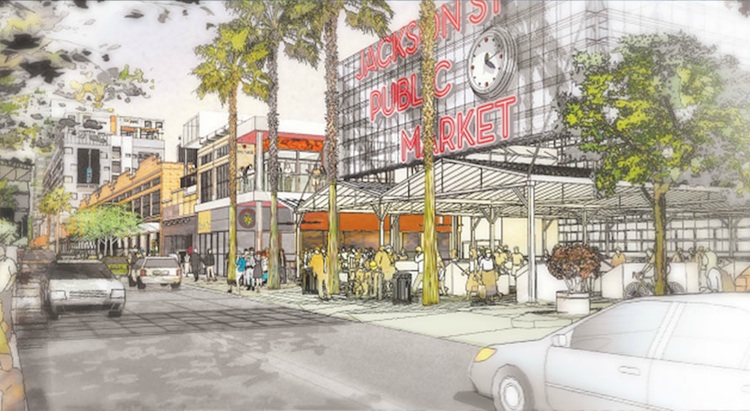 I recently had the pleasure of driving across a large section of our country as I moved back home to Phoenix from Boston. Driving across the country in Spring was great and as a sports fan I had baseball on the mind. Along the way I was able to check out some stadiums as well as the urban neighborhoods around them.

With at least 81 home games a year, baseball is an ideal sport to be played in a dense, active area. Unlike football, baseball is played frequently, causing a constant flux of thousands of people entering and exiting the ballpark. All of the stadiums I saw along my trip were wisely built into urban neighborhoods; they were: Fenway Park in Boston, Camden Yards in Baltimore, Nationals Park in Washington DC, Busch Stadium in St Louis, the Sprint Center in Kansas City (basketball/hockey, not baseball) and Coors Field in Denver. Our Warehouse District in Phoenix, even with a minimum of 145 sporting events a year, has yet to grow into an active area like those in some of the other cities and I wanted to find out why.

The first thing I noticed in the Cities with successful urban ballpark neighborhoods was consistency in naming and branding.  Kansas City has the “Power and Light District” near the Sprint Center, “LoDo” is near Coors field in Denver and so on. Chase Field and US Airways Center both sit in the Warehouse District, a subsection of Downtown, yet over the years the city has tossed confusing monikers like “Copper Square,” “Jackson Street Entertainment District,” and most recently, “Legends Entertainment District.” The new signs that say “Legends Entertainment District” simply confuse the issue: where does that “district” start and stop? The city would be much wiser to simply call the area between Jefferson and Lincoln “the Warehouse District,” it’s simple and can be understood by visual clues.

There’s no easier downtown to drive in than Phoenix, yet the city continues to barricade off many streets on game days, forcing the flow of traffic to leave quickly after games. If people want to drive downtown for games, they should expect to wait through the normal sequence of traffic lights to leave downtown. Letting traffic handle itself would certainly slow it down, but it would also encourage more people to go to local watering holes before and after the game.

Both Eutaw Street in Baltimore and Yawkey Way in Boston are closed on game days and become carnival-like areas full of food vendors, games for kids and the like. But even on opening day, with nearly 50,000 fans in attendance, Jackson Street in Phoenix was mostly empty.  Phoenix should consider closing Jackson Street off to automobiles from 4th to 1st Streets on Suns and D’backs game days. Food trucks, cart vendors and ticket scalpers could be kept within Jackson Street and it would greatly help the current bars and restaurants along that thoroughfare as well as encourage new developments. 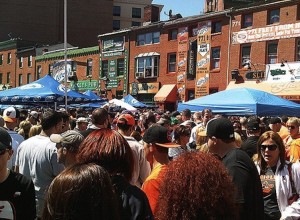 Eutaw St and Yawkey Way are closed to automobiles on game days and full of life.

An additional benefit to closing Jackson Street to automobiles would be that Phoenix could then follow Kansas City’s lead and allow open alcohol containers within the area (only when it’s closed to auto traffic of course).  Closing off Jackson and letting people carry drinks from bar to bar would give the Warehouse District a distinct competitive advantage over other entertainment districts in the Metro area (i.e. Westgate, Old Town Scottsdale, Mill Ave).  Far more people would stay in downtown on weekends, partying the night away if Jackson was set up in this manner.

Downtown Phoenix has major issues with large buildings presenting blank walls to the street. Chase Field actually does an OK job in this respect; its West-facing plaza is nice and is a permeable entrance to the stadium. Unfortunately U.S. Airways Center (USAC) presents a totally blank facade to the Warehouse District.  Future plans by the developers of the “Jackson Street Entertainment District” called for wrapping USAC in permeable edges and as a citizenry, we must hold their feet to that fire and make sure it happens. The Warehouse District is currently exempt from the Urban Form Code, so it’s going to take citizen involvement to make sure it lives up to the right urban standards. Denver’s LoDo succeeds in large part because its zoning overlay encourages historic preservation, mixed uses and human scaled height limits.

Two of the cities I visited, St Louis and D.C., have yet to build up the neighborhoods surrounding their ballparks. St Louis’ Busch Stadium was supposed to be surrounded by a downtown “Ballpark Village.” While the economy put the brakes on the Ballpark Village, it didn’t stop St Louis from being creative; they now have a series of softball fields in front of Busch Stadium that make a great play area for kids and families. Washington DC on the other hand, like Phoenix, has allowed the area near its park to languish through the economic downturn. Phoenix needs to be more aggressive making sure the surface lots in the Warehouse District have a greater temporary use than parking.

Phoenix’s warehouse district was once a thriving produce district and a lively Chinatown, but for the last 20 or so years it’s been sporadically lively, but mostly dead.  If only Phoenix would stop getting in its own way and follow the lead of cities like Kansas City and Denver, the area South of Jefferson could be one of the premier entertainment neighborhoods in the Southwest.

Tags: chase field, phoenix entertainment districts, phoenix sport stadiums, phoenix warehouse district, us airways arena, Will Novak
« Pedal Craft and the Business Case for Bicycle Infrastructure in Phoenix  |  The Low Down on the City of Phoenix’s Plans for the Bicycle Boulevard and Extending the Central Avenue Road Diet »