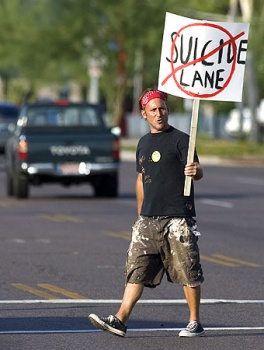 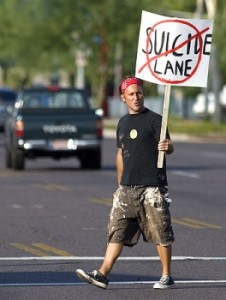 Today’s post is by the avid urbanist, community activist and my friend, Yuri Artibise.

Yuri Artibise—aka the Incurable Urbanist—has spent the past four years creating community in the urban desert that is better known as Phoenix. Through his Yurbanism brand, Yuri explores the ‘Y’ of urbanism by sharing ways to make our cities more livable, community-oriented places one block at a time.  Find out more at yuriartibise.com.

On December 14th Phoenix City Council voted 5-1 (with 2 absences) to accept the report of the Ad Hoc Task Force on Reverse Lanes. (A summary of the report is found at the end of this document.) The report recommended maintaining the reverse lanes with minor adjustments and future study. This was a frustrating day for those who are fighting for a vibrant and livable central Phoenix.

I applaud the Ad Hoc Task Force for their diligence in carrying out the almost impossible task of studying and making recommendations on the Reverse Lanes. I am disappointed, however, that they only studied half of the issue. In particular, the only solid data presented during the public hearings dealt with automobile traffic. Little attention was paid to small business vitality or local livability. No attention was given to the impact of the reverse lanes on pedestrians, cyclists, school children and transit users.

I have lauded the City of Phoenix in the past for their investment in the Melrose on 7th Ave streetscape, including the recently installed pedestrian controlled HAWK light. City Council’s refusal to remove the reverse lanes (even temporarily) undermines this investment. It indicates that they continue to view 7th Ave and 7th St as thruways to and from other destinations and not as vibrant communities for socializing and enjoying public art, restaurants and small businesses.

This support for the continuation of the status quo is even more frustrating in light of the City’s stated commitment to sustainability. The opening of the light rail indicated that City Hall was beginning to rethink Phoenix’s relationship with cars and recognize the role that streets play in shaping places for everybody to enjoy, whether they are in cars or not. Refusing even to temporarily suspend the reverse lanes is a step backwards and another sign that sustainable community is little more than a catchphrase at 200 W Washington.

In her closing remarks at the City Council meeting, Melrose Pharmacy owner Teresa Stickler asked City Council members whether we as Phoenicians want our motto to be: ”Phoenix, a great city to live in,” instead of “Phoenix, the fastest city to get out of.” By rejecting even temporarily removing the lanes, City Council, with only one dissenter, indicated that they still feel that cars are more important than community in this city.

While we may have lost this round, the fight will continue. We will build on the support that we received and continue to raise awareness that there is more to life in Phoenix than commuting by car. City Council will meet again in about six months to review the implementation of the accepted recommendations. In August 2011, Phoenix will have municipal elections for half of the Council and a new mayor. Both of these events will give us another opportunity to press City Council to do the right thing and—at a minimum—approve a temporary removal of the reverse lanes so real traffic (including pedestrians and bicycle), safety, economic development and community data can be gathered. The neighborhoods will be able to handle reinstating the lanes if we know they are needed. The continuation of community suffering due to unsubstantiated fears of increased commuting times is an insult to central Phoenix.

Leave a Reply to Tammy