Car Free Stories: An Old Bird and a New Bird on the Canal 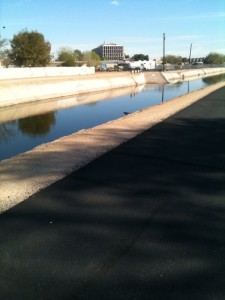 This is the first post in a new series called Car Free Stories which will document my various experiences riding my bike, taking transit and walking in Central Phoenix.

Today I’d like to share two stories about my daily bike commute on the Grand Canal.  One is about an old bird named Bob and another about a new bird on the scene.

There is an old gentleman dressed in a track suit that walks for exercise on the canal.  I see him almost every day.  Once we realized we were regulars on the canal, we began to smile and waive to each other and he soon became a familiar face.  Not too long ago, I was sitting at my “office”, aka Lux Coffeebar and I looked up to see none other than the old gentleman!  What the heck was he doing at Lux?  It was discombulating because to me this man did not exist except on the canal.  At any rate, we talked a little and then he was off again.  I saw him again at Lux about a week ago on the day my bike, the Canal Cruiser, was stolen.  He had gotten to know the Canal Cruiser too since he saw the two of us everyday so he commiserated with me, and I informed him I got a new bike – the Coffee Cruiser.

Up until this point I didn’t know my new friend’s name.  This morning I ran into the old gentleman again on the canal, we smiled and waived and he noticed the Coffee Cruiser and asked about it.  He even asked me why I wasn’t wearing a helmet, having become accustomed to it.  And we finally exchanged names. Bob’s not only become a familiar face, he’s become a friend and all because we’re both avid users of the canal.  It turns out, the canal can be a great place to make friends!

A New Bird on the Scene

Last Sunday morning, when I was riding to the “office”, a pink stick standing straight up caught my eye.  I decided to slow down and take a closer look only to find that there was a bird attached to it.  It was standing on one leg, a long skinny pink leg, like a flamingo.  But the bird was much smaller and  was black and white, unlike a flamingo.  I wish I had a photo I could share with you, but being a terrible birder, I wasn’t able to capture a shot.  It occured to me that I’ve never seen this bird on the canal before.  It was definitely new to the scene.

Today on my way back home, a woman walking her dog asked me if I knew birds.  I said no, because it’s true, I know nothing about birds other than observing them on my canal rides.  She pointed at the pseudo-flamingo bird that I had noticed before and asked me what I knew about it.  I told her it seems to have just landed in Phoenix a few days ago probably having migrated from some cold city up north.  She seemed to think it was just a solitary bird who’d lost her way, but I assured her, there was a whole flock of them, something I noticed down the way earlier in the day.

It struck me how unusual it is that I would actually notice  a new bird arrival on the canal.  It turns out that the slow mode of transportation – biking – affords me the luxury of actually looking at things like birds without being honked at or run into, something I could never do in a car.  Morever, the serenity of the canal seems to encourage people to talk with one another, like the woman who asked me about the birds and my new friend Bob.  The canal is a unique intersection of a public urban space, a park and a thoroughfare.  This unusual combination makes for the most fascinating experiences and the most unexpected connections for a regular canal rider like me.

Photo: One of the plethora of birds on the canal.  The pseudo-flamingo bird, however, eluded my camera.