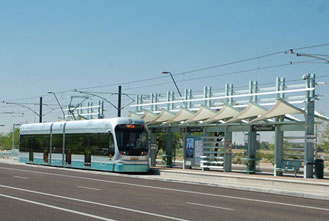 Mayor Gordon on his Legacy to Phoenix 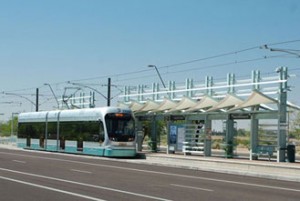 This morning, I had the honor of sitting down with City of Phoenix Mayor Phil Gordon and asking him a few questions about future urban development and sustainability.  I had asked readers to send me questions to ask the Mayor and I got many really good ones.  Unfortunately, the Mayor’s morning was a particularly busy one and I was only able to speak to him for a short time.  But I tried to touch on the topics that matter to my readers  in the short time I did have with him.

Blooming Rock: Would you tell me about the Green Phoenix plan and how it’s being implemented?

Mayor Gordon: We were fortunate to work early with the Department of Energy to structure a unique type of grant which we ended up showing was worthy.  We received one of the highest awards from the Department of Energy of any city because we didn’t follow the traditional model of neighborhoods being square or just residential.  Rather we focused it along the Light Rail line so that it could encompass non-profits, private companies, retail, commercial, public and residential.  And it would be visible too.

Sometimes people confuse clean energy and efficiency.  You think solar if you’re from the southwest or wind if you’re from the northwest.  Here we’re really focused on changing the way we think.  Similar to, several decades ago, what was all about smoking.  It took a lot of education and a couple of generations before society said “yup!” (smoking is bad for you) for the most part.  So we need to do that with energy efficiency because energy efficiency is the least expensive way to use less energy.  (The Energize Phoenix plan is about) taking less energy-efficient homes and insulating them, weather-proofing them, with different doors and different windows.  And then monitoring that to show that one’s norms have changed and that this grant is actually making a difference.  So ASU is part of the team to do the statistical and monitoring.

We’ve been meeting with the Department of Energy on a weekly basis with our partners ready to unveil this plan in the last week of October.  The Green Rail corridor is sort of the spine, (but it includes) everything on both sides of it for a couple of blocks.  So that’s what’s exciting.  It’s actually both educational and economically viable and statistically (we can show that) we are making a difference as opposed to here’s a grant and $700,000 to go manufacture this or a $3000 credit on your solar.

Blooming Rock: What do you think we can do to promote alternative transportation in Phoenix because for a “green city”, we’re very car- dependent.  What are some of the things you promote in terms of walkability, bike-ability and transit?

Mayor Gordon: One, provide better environments so that means shaded areas, safe bike paths, safe walking paths, visually appealing and lit.  Two is (make sure that) whatever incentives or rewards the city gives that they be related to mass transportation sort of like what Singapore does.

Blooming Rock: What is happening with the Tree and Shade plan?

Mayor Gordon: That’s a part of it.  We’re planting trees and mechanical structures where you can’t plant trees.  Pretty soon we’ll be talking about shade structures that are both solar and shade.

Blooming Rock: I know the City is facing some major budget cuts, what would you like to tell the people of Phoenix and the City staffers about how to get through this really difficult economic time?

Mayor Gordon: Well, we’re learning to do more for less, all of us, non-profits, profits, government.  In fact I’m going to start an award that starts next month recognizing individuals, companies or employees, public to private, for people who are stepping up to the plate and are doing more with less – volunteering time, leveraging funds, taking on more work load.

So we’re going to get through it.  We’re actually becoming, as a community, more efficient.  I think now is the time with the limited dollars everybody has to invest in the future because it’s a great city, the climate is great, and people are going to continue to move here.  We’re going to get past the economic issues and the immigration issues.  We need to be prepared if we’re going to keep this a great city, that it means sustainability.  Water, the environment, the air (quality), that is really what we’re talking about.  All these components are related so anything you can do to be involved  (would be great).  Sure, help your neighbor, help your church, help your government, great, do those things.  But also do anything you can to conserve water, help the air (quality) and use less electricity.

Blooming Rock: I know we’re nearing the end of your term, what’s the legacy you’d like to leave?

Mayor Gordon: The problem with “leaving legacies” is that you start making decisions very early on in your career for that end goal and legacies don’t usually last.  I remember in college (learning) about the Byznatine Empire that left statues to themselves that crumbled.

My legacy is that there isn’t any or it isn’t recognized.  (It may be) that solar and renewable becomes a mainline and that my kids and their kids will get to enjoy Phoenix like when I grew up.  It’s a different type of Phoenix with different types of technologies, but that’s my legacy. And nobody will remember, except maybe my kids.

Photo Credit:  The Light Rail, the genesis of the Energize Phoenix grant.  Photo from phoenix.gov