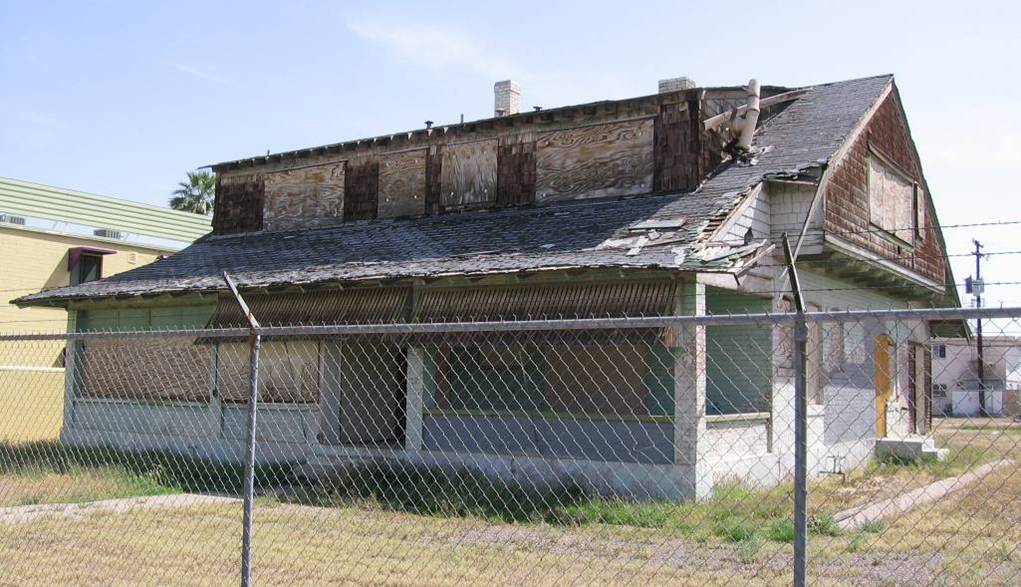 Why not All Old Buildings Should be Saved

This weekend, the Phoenix Historic Neighborhood Coalition (PHNC) released the Most enDangered Dozen.  It’s a list of local historic buildings in danger of being torn down, some because they are in blighted neighborhoods, some because they themselves are in terrible condition and some because their owners have foreclosed.  In other words, these properties are on the verge of being sold to some very enterprising but potentially culturally insensitive people that will likely tear these buildings down.

The buildings that made this list elicited different reactions from me.  With some of them like the Art Deco Professional Building and Al Beadle’s Whites Gates house, it broke my heart that they were in danger of being torn down.  They are beautiful buildings and no brainers in terms of their architectural significance.  Others like the Leighton G. Knipe house in particular seem too problematic to save.  This house, pictured in this post, looks to be in really bad shape and although it may be significant because it was built in 1909, it doesn’t seem special enough architecturally or historically to save, considering it is in such disrepair and zoned for transit-oriented development.  This might sound shocking to my historic preservation friends but I think for us to have a successful historic preservation policy in Phoenix, we must have a balanced and nuanced approach.

In my opinion, just because a building is old doesn’t mean it should be saved.  Some buildings were just average when they were built, are in terrible shape now and perhaps it IS best for them to be torn down to make room for something more appropriate and usable.  An example of this is the Beef Eaters building just west of Central on Camelback Rd.  Having gone on two tours of it, I was disappointed in the lack of architectural significance in the building.  It was just an average building that was added on to over time in an average way and now it’s a sprawling giant in disrepair on a very valuable lot.

What makes Beef Eaters significant isn’t the building, it’s what happened IN the building.  The stories of all the deals that were made, of the people who ate and drank there, of the meetings that were held are what make Beef Eaters so important.  But I question the assumption that preserving the building is the only way to save these memories.  Perhaps a monument, or a portion of the building can be saved and serve as a museum to what was there before.  But it doesn’t make sense to keep the whole thing, especially because it’s unworkably large and it’s just not that great of a structure to begin with.

So this brings me to the more nuanced approach to historic preservation.  In my opinion, there are at least two major categories of old buildings.  The first is comprised of buildings that were very well built and have stood the test of time.  These are beautiful buildings, well-designed and architecturally significant.  These buildings must be saved.  The old Harold Ekman building where St.Francis restaurant is now comes to mind.  This building was great in its inception as the office of architect Harold Ekman, it stood the test of time and now has been cleaned up and glamorized (in the best sense) by architect Wendell Burnette.  It’s a historic preservation success story in Phoenix and one that will hopefully be repeated many times.  Most of the buildings on the Most enDangered Dozen would fit into this category.

In the second category are  old buildings that were only average when they were built and have deteriorated over time.  Buildings in this category should be taken under consideration for demolition.  This doesn’t mean that the history of these buildings shouldn’t be preserved.  Perhaps their history can be captured by preserving a small section of the building, or by reusing some of the components or even by writing the stories of the building on a plaque or displaying old photographs of it.  The important thing is that the history is saved, preserved and here for us to integrate into our present and future identity.

My challenge to the Phoenix Historic Neighborhoods Coalition is to make a subset list of historic buildings that MUST BE SAVED, which in my opinion is not the same at the Most enDangered Dozen.  This would require some difficult decisions and creative thinking, but wanting to save every building just because it’s old is not only unworkable but I question if it’s the best way to move forward.

However, the question arises, who decides what’s worth saving?  I think it should be decided by a collaborative team comprising not only of historic preservationists, but of developers, architects, urbanists, sustainability experts and neighborhood residents.  The wider perspective of a multi-disciplinary team would result in the most balanced recommendation behind preservation, demolition or a multitude of third options.

The above is a best-case scenario.  Right now, we have no consideration whatsoever towards historic preservation and therefore we end up tearing down gems of buildings.  But I caution against the opposite notion that every single building built before 1985 should be preserved because of its age.  This ties the hands of future development too much.  It might just be that the best way to fight Phoenix’s tear-down mentality is not with a broad-brush ‘save everything’ approach but with a more nuanced and realistic approach of what must be saved and what has a reasonable case for demolition.

I do applaud the PHNC for putting together this list and getting this conversation started.  Without this very important first step, historic preservation would be a vague idea in the minds of concerned citizens instead of a concrete list of specific buildings that require specific actions.  I also applaud the PHNC for compiling a “watch list” of endangered historic places to be released at a later date.  Putting specific buildings on the public’s radar is the first step towards a successful historic preservation policy.

Photo Credit:  photo of the Leighton Knipe house from the PHNC’s social media release of the Most enDangered Dozen.

Leave a Reply to Donna Reiner