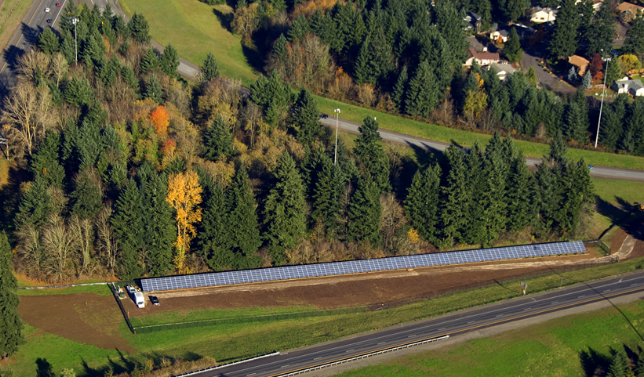 Phoenix – Let’s get on the Solar Highway!

As you know, we probably live in the sunniest place in the country.  This may become a frustrating thing in the coming months when we might be praying for an occasional cloudy day in July, but it’s what we have to deal with here in the Valley of the Sun.  Our constant companion, the sun, is actually a blessing if we consider that Phoenix is supposed to become a ‘solar city’ according to Mayor Phil Gordon’s Green Phoenix plan.

(Currently Phoenix has received a $25 Mil grant from federal stimulus funds for the Green Phoenix plan and will be using it to make buildings along the Green Rail Corridor more energy efficient.  To find out more about this grant and the programs resulting from it, check out my post about Energize Phoenix.)

Though Energize Phoenix is a great start to greening our city, there are other projects that could help Phoenix on it’s way to becoming carbon-neutral.  One is thinking out of the box with our solar program.  I’ve blogged before about solar possibilities for Phoenix by putting arrays on parking canopies and big-box stores and bringing solar gardens to our vacant lots.  I was happy to see that Mayor Gordon had suggested turning 1200 acres at the city’s landfill off of Arizona 85 in Buckeye into the State’s first solar power plant.  This is the kind of thinking that’s required to make Phoenix a solar city beyond encouraging individuals to add solar to their rooftops.

Another solar possibility for Phoenix is to put solar panels in the right-of-way of freeways.  Usually these pieces of land are unused besides being leftovers from the actual roadways.  Along with parking canopies and big-box rooftops, this is infrastructure that’s already here so why not use it to harvest solar energy?  Think this is too crazy of an idea?  It’s been done already!  The Europeans have done it on the autobahn in Germany and solar graces the highways of Switzerland, Spain and Austria as well.

But has it been done in the US where highways abound?  I’m happy to report – yes it has!  The first-ever solar highway is the Oregon Solar Highway Demonstration Project, pictured in this post.  This small installation which cost $1.3 Mil produces enough energy to power 10 homes for a year and the Oregon Department of Transportation uses it to power the lights on the I-5 and I-205 exchange.  The solar array is expected to cut the utility bill for this stretch of highway down by one third.  So far, Oregon’s solar highway project has been a great success and they are planning to do more projects.  Now Sacramento, CA is planning on using their stimulus funds to add solar to their highways as well.

And this brings me back to Phoenix.  We have lots of highways.  Some of the right-of-ways already have beautiful public art on them.  But many don’t and would be ripe for a solar power plant.  If rainy Oregon can reap the benefits of solar power plants on it’s highways, we, the sunniest state in the country, need to follow suit and do the same!