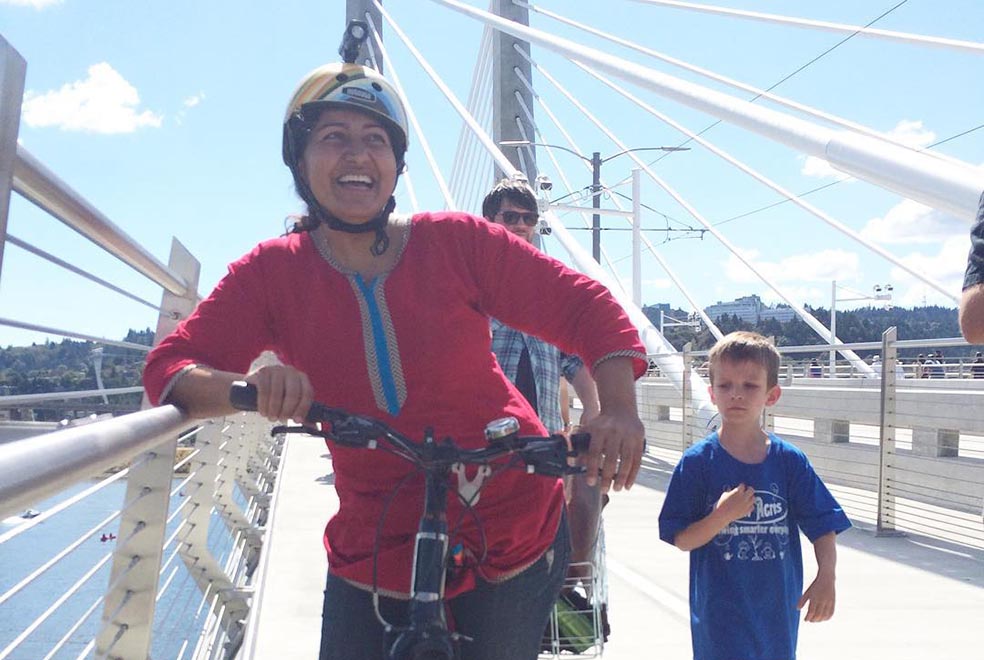 14 of my Favorite Things About Portland, Oregon

In early 2013 Portland was like a new love interest that I had fallen hard for. I was enamored with just about everything in the city. I gained 10lbs just cause I wanted to try all the food and I couldn’t get enough of the Blue Star Donuts, the Waffle Window and Lauretta Jeans Pie Shop. I traipsed around the city taking photographs of the gorgeous flowers, the beautiful bridges, and the many group bike rides I went on.

Four years later, just like any love interest, the shine has worn off and I’ve settled into a calmer, less intense relationship with Portland. But some things about the city still make my heart flutter. Four years isn’t a long time and I realize it takes longer to develop a deeper relationship with a city, but below is a list of things that I’ve come to have a sustained love for:

1. Livability: Portland’s livability is a huge reason why I moved here. And the promise of livability was fulfilled, largely because I am able to afford to live in inner Portland. (It should be noted that outer Portland isn’t very livable at all, and many people can’t afford to live in inner Portland). I am able to walk to work, to the coffee shop, to several restaurants, to a food cart pod, to the grocery store, to the hardware store and even to a clinic. On nice days, I can even walk to downtown. Walking is the crown jewel of livability, and the next level down is biking. I’m able to bike to a much larger radius of places. But what about when the weather is really bad? Then I take Car2Go, Getaround or Uber. Having these car sharing options makes being car free an almost seamless and gap-free experience.

I want to give a special shootout to TriMet, Portland’s transit agency, here. When I first moved to Portland, I took the bus and train more often. Recently I’ve veered more towards car sharing. But a week ago, I was reminded of just how necessary a service TriMet provides during the snowy and icy period in Portland. Car sharing, biking and even walking were out, but the stalwart TriMet was there to save the day. It was nice to know I could still get around thanks to the busses and trains.

I have really enjoyed leading a car free lifestyle in Portland. I want to thank the city for showing that it can be a virtually zero-sacrifice choice.

2. The helping culture: Ask and you shall receive is what I’ve found to be the case in Portland. I have noticed that people tend to help each other out more than in other cities I’ve lived in. When a friend is in need, lets say of a place to stay or of some help to move, then a host of helping hands appear. People support one another when anyone is need. Even when the social connection between them is weak, the readiness to help is there. I experienced this when I did a bike move. About 25 people showed up on their bikes with trailers and baskets and they loaded up my boxes and my furniture and rode to my new place. There they unloaded everything and voila, I had a community-fueled move. The helping culture is also evident in the volunteer-run organizations in town. Two that I am most familiar with are The City Repair Project and Depave, both of which do the majority of their work through a strong and vibrant volunteer base. The community-minded helping culture is a huge strength of Portland.

3. The re-use and sharing culture: I appreciate the culture of reducing waste and living with a lighter footprint. I love that I have bought very few “new” items of clothing over the four years I’ve lived in Portland. With a variety of stores that resell clothes, I haven’t had to buy new things. This goes for furniture, books, dishes and anything you can think of. Excellent and copious garage sales, free boxes, and resale stores guarantee that it is rarely necessary to buy new. I also appreciate the community resources available in Portland, such as free libraries, tool libraries, kitchen libraries and media equipment libraries. You can read about them here. These resources also ensure not having to buy new things, or buy anything at all.

4. Access to healthy food: It’s easy to take for granted that you can get organic local produce, eggs, milk, and specialty items at many of the grocery stores in Portland. Stores like New Seasons bring these items to many neighborhoods in inner Portland. But even more conventional grocery stores like Fred Meyers carry a good contingent of organic items. In addition, Portland is home to some of the best farmers markets in the region, including the PSU Saturday Market and lots of smaller local neighborhood markets. Even the food served in restaurants often includes organic options, and options for people with food restrictions, offering a variety of non-dairy options, gluten-free options and vegan options.

5. Food carts: Some of the best food I’ve had in Portland has been out of food carts. The reason I like the food carts in Portland so much is that a great many are owned by people of color. That’s because food carts are a more affordable way to have a “restaurant”. Overhead is much cheaper and so it encourages more experimentation, more diversity and just more interesting food. Food carts are incubators for ideas. The successful ones go on to become brick and mortar stores. I also like food carts because of the quasi-public space they inadvertently create. Technically it’s not a public space, but you get to enjoy a less formal, outdoors, picnic-like atmosphere with fellow cart go-ers.

6. The bookstores and the love of books in Portland: I LOVE the bookstores in Portland. Of course, there is Powells, but have you ever appreciated all that Powell’s offers? Powells has four stores in Portland and one in Beaverton. They host writers, artists and thinkers and in general contribute to the bookishness of the city. There are also a spate of smaller bookstores sprinkled throughout the neighborhoods whose aisles are a pleasure to peruse. Mother Foucault’s Books, Longfellow’s Books, and the little no-name bookstore next to the Buffalo Exchange on SE 37th and Main come to mind. I have hosted a successful book club for two years where we read a book a month and I got to know Portland’s love of books first hand.

7. The parks and public squares: Part of my honeymoon with Portland included an almost daily visit to Laurelhurst Park after work, before I knew many people in Portland. That idyllic park inspired by the Olmsted brothers served as an oasis from city life. I loved watching people walk their dogs, play frisbee, kids running up and down the hills and watching the ducks at the pond. I later got to know about other parks in Portland, all of which were delightful and most of which are well used. This extends to public squares, such as Director Park and Pioneer Square, both of which routinely host events. In the case of Director Park, it is a successful square just used to hang out in even when there are no events happening. The parks and public squares contribute to the vibrant public life of Portland.

8. The Spring: The Spring in Portland is like a revelation. Portland is a very beautiful place in the Spring. Even though I spend most of my time in the city and rarely get out into nature, Spring provides a symphony of natural beauty for the senses. The cherry blossoms, the flowers, and the ongoing blooming of different plants that lasts for months uplifts the heart after a dark and cold winter. Over my four years, I’ve learned to recognize the sequence of blooms that appear, like when the tulips come up, when the poppies come up and when it’s rose season. I will sorely miss the Spring in Portland!

9. The bridges: I love bridges and I was in for a treat in Portland. My favorite bridges in Portland include the sublime St. John’s Bridge, the working man’s Steel Bridge, the elegant Fremont Bridge, and my very favorite is the Tilikum Bridge. Having come from a landlocked city without a lot of bodies of water or bridges, I’ve delighted in looking at the beautiful bridges of Portland and also in using them. The Tilikum Bridge is not only an aesthetic triumph, but it’s a leap in car-free transportation, being a pedestrian, bike and transit bridge only that is closed to cars. It makes a difference to the experience of walking and biking on the bridge, knowing that cars aren’t speeding by. It is a peaceful and slow-paced break from the hustle and bustle of the streets.

12. The old theaters: I have been very lucky to have lived within walking distance to the Bagdad Theater, the Clinton Street Theater and CineMagic Theater. All of these are restored older theaters that are just wonderful to experience. Unfortunately, many other cities have demolished their old theaters, and with them, have destroyed part of their cultural heritage. Kudos to Portland for preserving a good number of its older theaters, which bring joy and delight today. My favorites are Bagdad, Hollywood Theater, Laurelhurst, Academy, St. John’s Twin Cinemas and the Moreland Theater.

13. The film scene: For the size of the city, Portland has an amazing film scene. I have attended the Portland International Film Festival (PIFF) put on by the Northwest Film Center every year since I’ve lived here and am sad that I won’t be able to attend after I move. I’ve watched some of the most superb and esoteric films during this film festival from all over the world. When it’s not PIFF time, Portland continues to show excellent screenings of independent movies throughout the year during a number of other festivals including the Jewish Film Festival, the Portland Film Festival, and the Cascade Festival of African Films, among others. The older theaters around Portland in conjunction with the Northwest Film Center show excellent independent movies all the time, even when there isn’t a festival going on.

14. Street and cultural festivals: Street and cultural festivals are part of the summer fun in Portland. It’s impossible to attend every festival that goes on, but it is delightful to walk through a street festival and enjoy the food, entertainment and vendors. As a car free urbanist, I also like it when a street is repurposed into a true public space where people can gather and cars are not allowed, even if it is for a day. Portland also has some great cultural festivals, such as the Roots Festival, India Festival, the Portland Greek Festival, and the Lebanese Food Festival to name a few.

I will miss Portland and all it has to offer!

Photo Credit: Photo taken by Meghan Sinnot on the opening day of the Tilikum Bridge.