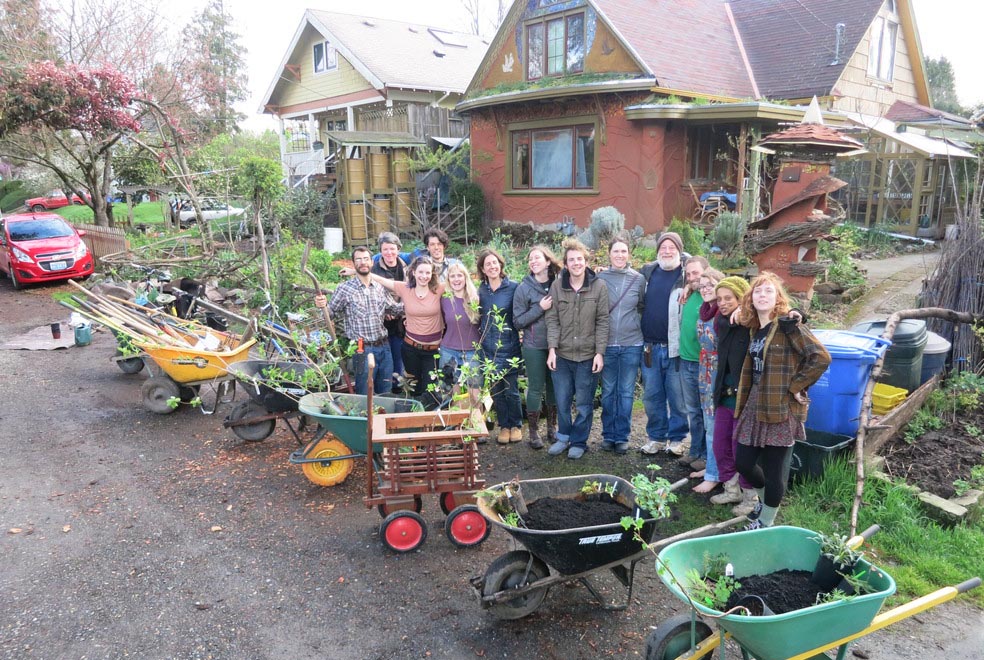 The Village Building Convergence – an Antidote to Gentrification

If you’ve seen the curvy and colorful cob structures around the city of Portland, chances are good that you’re seeing the work of the Village Building Convergence (VBC), an annual placemaking festival organized by City Repair which is celebrating its 15th year. The 10-day festival is underway this week and its going stronger than ever. It’s main mission is to facilitate hands-on volunteer labor towards making various community-building projects around the city become a reality.

This year’s projects include 22 intersection painting projects, 8 landscaping/gardening projects and 9 building projects, such as making earthen plaster walls for buildings, cob benches, and community gathering structures. The evenings are filled with workshops, panels, lectures and entertainment. Speakers include local experts such as Judy Bluehorse Skeleton and Mark Lakeman and national figures such as Mike Lydon and Michael Meade among many others. Evening workshop and lecture topics range from the spiritual aspects of community to tactical urbanism to permaculture to equity.

Projects are selected based on a request for proposals that is put out in the fall. Neighborhoods, businesses, and individuals apply to the VBC for assistance in building or repairing a community-oriented project through the RFP process and once selected, they get training and education on how to get funding and get their projects done. During the annual Village Building Convergence, they get actual hands-on labor led by a team of facilitators to build the projects. Through this process the VBC has helped build over 500 projects around the city so far with minimal funding.

The Village Building Convergence is VERY important, especially right now. Why? Because it cultivates social capital as a viable alternative to another kind of capital – money. This is especially important right now when living in Portland is requiring more and more of the latter. The festival is about building a city which is driven by community interests rather than developer interests. It is about building a city where everyone has a voice, not just people with lots of greenbacks in their pockets. It is about doing a lot with a little. It is about the restoration of nature instead of its destruction. It is about cooperation rather than competition. And it is about the power of community to move mountains.

These are the values that have given Portland a sustainable, grass-roots, creative and community-oriented reputation around the country. But increasingly, this reputation is disproving itself. It is attracting droves of people to move here, driving housing prices up at a breakneck speed, and displacing the very people who kept Portland weird (and cool). Is Portland going to become just another yuppie haven with expensive ice-cream on the first floor and expensive condos on the second?

The VBC says NO. The festival is here to stay. It is here to thrive. It is a grassroots effort that has found partners in the city government and city institutions such as Portland State University, increasing its impact around the city. The VBC creates a space where you can question the direction the city is moving and feel empowered to do something about it.

If you haven’t attended a VBC event this year, you still have a chance. Tickets to evening events are $15 in advance or $20 at the door. Check out the full schedule of daytime hands-on work events here.

Full Disclosure: The author works for Communitecture Architecture, Planning and Design, a sponsor of the Village Building Convergence and a sister organization of City Repair.