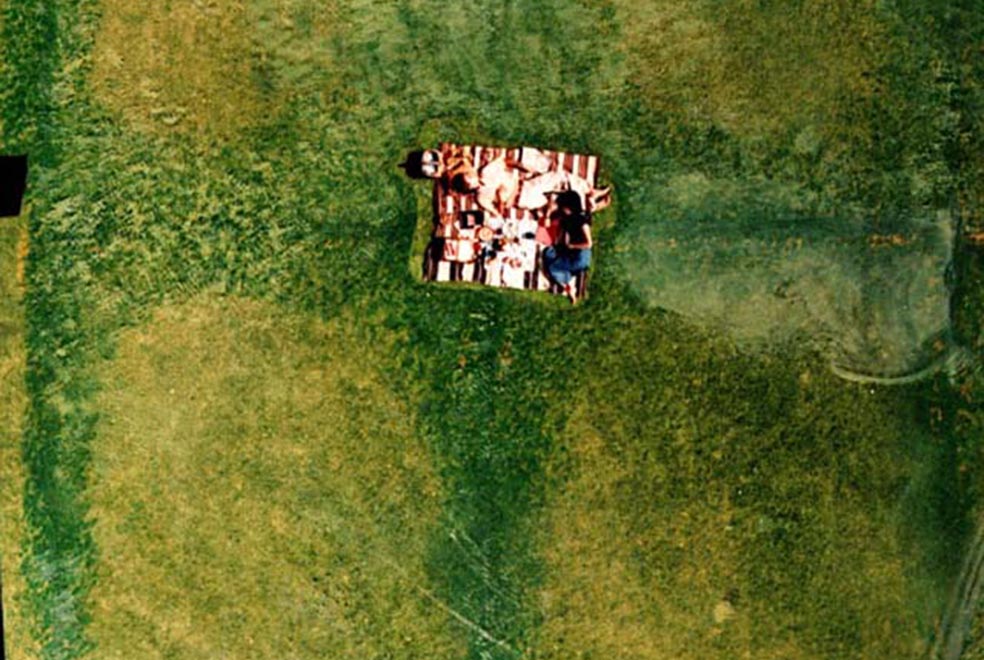 Reclaiming Urban Space for People with the Picnic Blanket Effect

Recently, fellow blogger Hart Noecker of Rebel Metropolis shared this photo from Shorpy with me: 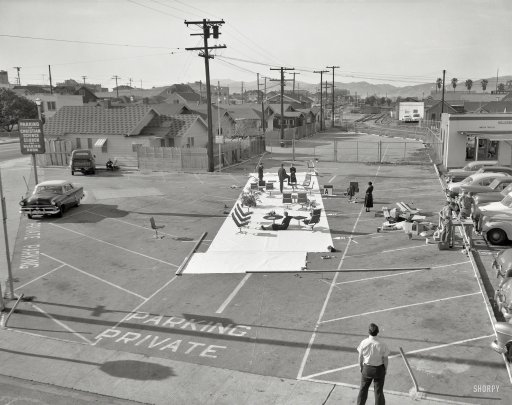 I was struck how these people managed to define a totally new space within this parking lot merely by taping down a bunch of butcher paper. It’s as if they were “drawing” a new space on a plan, but they did it in real life at full scale.

I encountered another example of defining a new space merely by putting something on the ground this weekend at the Belmont Street Fair. At the intersection of SE 34th and Belmont, which is usually never a space that you would actually want to hang out in unless you have a death wish, the organizers of the fair put down a round piece of turf, big enough to cover the whole intersection and big enough to accommodate somewhere around 20 or 25 people.

What was remarkable about this and the whole street fair is that a space that is usually reserved for cars and cars only, became a place for people, exclusively. And this particular intersection pop-up park, not the edges of it, but the middle of it, which is only occupied by cars (besides the occasional jaywalker who is going diagonally across the street) every other day of the year, is a remarkable act of reclaiming a public space.

I call this the “picnic blanket effect”. In essence, when we lay down a picnic blanket at a park, we are claiming a space for ourselves. We are defining a place that is separate from the rest of the park and is designated for whoever is invited. It is a very simple way of defining space within a large undefined field. 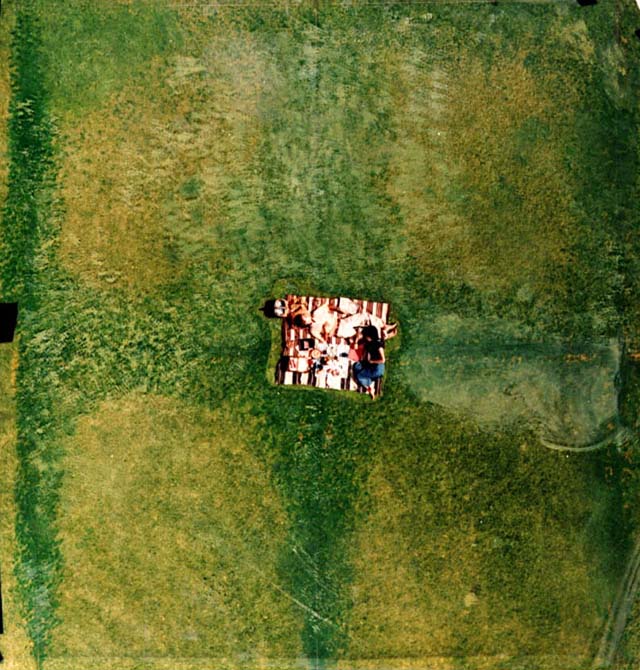 The butcher paper pop-up park on the parking lot and this turf pop-up park at the Belmont Street Fair – they define space with the simple act of laying down a “picnic blanket” too. But in these cases, they are reclaiming space from a field designated for cars and redefining it as people space.

The picnic blanket effect is essentially the idea behind the parklet or PARK(ing) Day, which is coming up this Friday on September 20. PARK(ing) Day “began in 2005 when Rebar, a San Francisco art and design studio, converted a single metered parking space into a temporary public park in downtown San Francisco. Since 2005, PARK(ing) Day has evolved into a global movement, with organizations and individuals creating new forms of temporary public space in urban contexts around the world.” People over the years have set up tiny little 9 foot X 18 foot parklets in place of car parking spots, sometimes with fake turf, sometimes with other temporary surfaces and sometimes with furniture or a basketball hoop and a number of other tactics.

These simple acts of “re-drawing” with a temporary surface is a reminder that it is us, ultimately, who define space. And road markings are not set in stone, so to speak. They are just paint. And that with enough political power and people power, entire roads can be reclaimed as people spaces. For example. this street was closed, or rather “opened” for a neighborhood block party in Southeast Portland. With cars out of the picture, kids were able to play safely, adults were able to mingle and a people were able to be people on the street without having to dodge cars.

Roads can be put on diets, made to include bike lanes and wider sidewalks and bump-outs for pedestrian crossings at intersections. But these are all infrastructural changes that take time and advocacy and long and hard effort.

Picnic blanket urbanism, on the other hand, can be an immediate and cheap way of reclaiming space. It is more formally referred to as tactical urbanism. CityLab defines it as “interventions of a sort – quick, often temporary, cheap projects that aim to make a small part of a city more lively or enjoyable.” It can include everything from setting a couch and a few chairs out on a raod median to painting an unofficial bike lane on a street to painting beautiful designs on neighborhood intersections, like City Repair does.

Picnic blanket urbanism or tactical urbanism may be comprised of small, temporary actions, but they pack a big wallop! Even if they are as temporary as the Belmont Street Fair that appeared and disappeared within the course of 24 hours, they have a permanent effect on the way people see the city. They help define spaces that we take for granted in a completely new way and they remind us that cities are malleable, human creations that can be re-created to fit people better.

What are some examples of picnic blanket urbanism or tactical urbanism that you’ve seen in your neck of the woods?

Lead Photo Credit: Photo from the Power of Ten movie by Ray and Charles Eames.