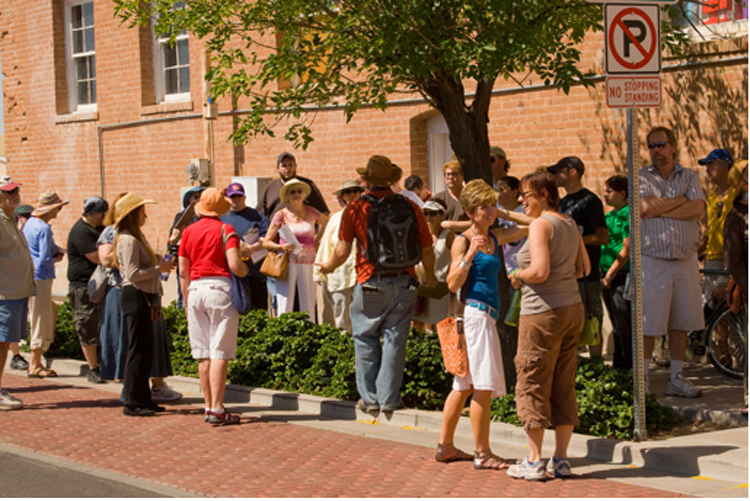 Today’s post is by David Crummey. David Crummey is a Mesa resident with a strong passion for walkable urbanism, public transportation, local businesses and economic development. He studied Urban & Environmental Planning at Arizona State University as a graduate student. Currently, David works at a small charter school near Mesa’s downtown, making sure teachers get paid, kids get fed, grants get filed, computers turn on, data gets sorted and interpreted, and pencils get ordered. He hosted the 2011 Jane Jacobs Walk in downtown Mesa, as well as helped found Lo-Fi Forums, a monthly, quieter, more interactive TED-style salon at a coffee shop downtown Mesa. He is also the editor of the freshly launched blog Stringtown Rising.

Phoenix isn’t what you think of as a “walkable” place. Heat, cars, distance — they all get in the way and we all use them as excuses. Despite that, we still turn out in droves for art walks and festivals and, as a community, we’ve proven the experts wrong with how long we’re willing to walk to a light rail station. People are made to walk; cities are made for people; and no one was more in tune with this than Jane Jacobs.

Jane Jacobs (1916 – 2006) was a writer and activist who came to be considered by many as one of the most important urban thinkers of the past century. She was not a trained planner or architect, in fact, she never received a college degree. Instead, she garnered her insight on urban economies and urban form by watching how people use the city from her walk-up in the West Village of New York. Her first book, The Death and Life of Great American Cities (1961), fundamentally changed the way we think about cities. Her voice continues to reverberate across the country and globe. In fact, her insights in Death and Life still ring true today. Jacobs called for walkable communities, a mix of uses (and time of use) on the street, short blocks, and diversity of building ages and types to increase the economic viability and safety of neighborhoods. What were, at the time, radical ideas, are now almost considered common sense today.

Jane Jacobs Walk (formerly Jane’s Walk) was brought to the Valley in 2009 by urbanist Yuri Artibise, who helped coordinate the first sets of walks. Proving that the valley is full of passionate and interested people, these events have been very popular in attracting a diverse group of community members to take a different look at how we use our cities and to connect with others in their neighborhoods. Last year, including the three walks held in Phoenix and Mesa, there were 511 walks held in 75 cities in 15 countries around the world.

Begun in 2007 in Toronto, Jacobs’ adopted hometown, Jane Jacobs Walk honors her legacy by hosting free “walking conversations” that bring together the community to talk and think about what matters in how our cities and neighborhoods are built. Anyone can host a Jane Jacobs Walk; events are coordinated and led by volunteers passionate about where they live, work or play. Events do not necessarily need to be walks, there have been numerous bicycle rides, wheelchair rolls, and van/bus tours as well.

This year, there are four walks scheduled in the Valley for the weekend of May 5th & 6th. On Saturday morning, Metro will host two walks — the first, a walking/bus tour of the Central Mesa Light Rail extension, discussing “station identity, sustainable development, transit as a placemark, and downtown Mesa as an arts and cultural district.” The second will explore the Tempe Modern Streetcar project along Mill and Ash Avenues. Both tours begin at the Sycamore & Main light rail station, one walk following the other.

Saturday evening will feature an “Urbanist Pub Crawl,” taking participants through Downtown Phoenix, bringing lively discussion, community and camaraderie, as well as analytical eyes, to a few venues — each with its unique history and relationship to the street and community.

Sunday morning will bring a walk to Mesa’s downtown, discussing the coming light rail, transit-oriented development, and connections between the historic neighborhoods and businesses on Main Street.

In addition to the aforementioned walks, there will be a social Friday evening held at Il Vinaio in downtown Mesa, including a short presentation and moderated panel discussion.

So come, join a walk — or host a walk — meet interesting, passionate people and take a stroll through our communities. Chat about what makes our neighborhoods tick and take a good look at our city with Jane Jacobs’ eyes, helping to make the Valley cities a more walkable — and human — place.

Leave a Reply to PhxDowntowner