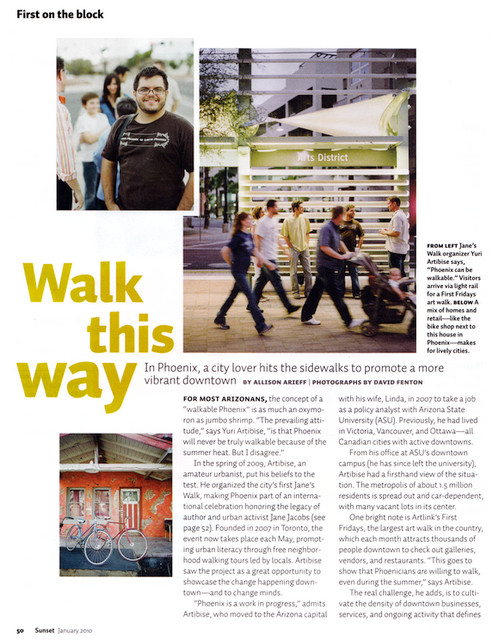 This is an annual walk put on by urbanist Yuri Artibise in honor of Jane Jacobs who was a community activist, amateur urbanist and advocate of walkable neighborhoods.  There are several Jane’s Walks that occur throughout different cities in the US but Yuri brought it to Phoenix, a place that is in dire need of the ideals espoused by Jane Jacobs.  Find out more about this remarkable woman and her accomplishments here.

Why I think Jane Jacobs Rocked!: 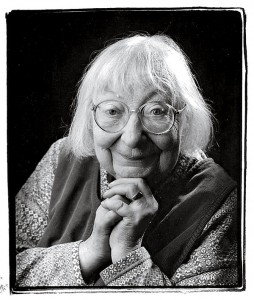 She wasn’t trained as an urbanist.  She was just a housewife with kids who cared about what happened in her city.  She’s proof that one person can make a tremendous difference.  And I love that she was a woman.  Yes, that makes a difference.  She’s an inspiration to all of us who might think we don’t have a voice.  She was just a housewife with little formal training, in a man’s world, going against 150 years of established urban planning practices.  The fact that she was able to have such a huge impact against all odds is a great inspiration.  So I not only admire Jane for the urban theories she developed but I admire her more so for the person that she was.

3 Reasons Jane’s Walk Phoenix is an Important Event for the Development of Phoenix: 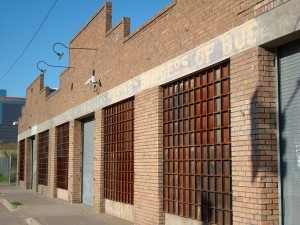 1.  It gives face time to the little-known, disconnected warehouse district of downtown.  I personally get to go to AmenZone every Sunday for Kundalini Yoga.  Every time I go, I’m surprised at how very quite this area is.  Granted, our downtown is too quiet as a whole on the weekends, but this particular area seems isolated and separate even though it’s physically not that far away from other downtown activity.

2.  The more awareness there is of this area, the more ideas and interest there will be in developing it.   Other cities have done a great job in developing their warehouse districts into vibrant, hopping places with restaurants, galleries, studios, and lofts.  The question is, can we do it here?

3.  It’ll bring people together as a community to talk about the future of this area.  The way things go in Phoenix is more in our hands than we know.  Instead of leaving the way our city looks, feels and works in the hands of out-of-state developers with deep pockets, can we take ownership of the city and encourage smart development based on local, sustainable and creative businesses and adaptive reuse?  Participating in this walk is one way to take ownership and pride in our city and to have a say in what goes on here like Jane Jacobs did.

Are you on board?  Am I going to see you there on Saturday?  Also don’t miss Jane’s Talk at the historic San Carlos Hotel on Tuesday May 4 from 7-9pm.

Are you inspired by what Jane Jacobs did?  How can we taylor her ideals to our challenges in Phoenix?  Let’s discuss, leave me a comment!