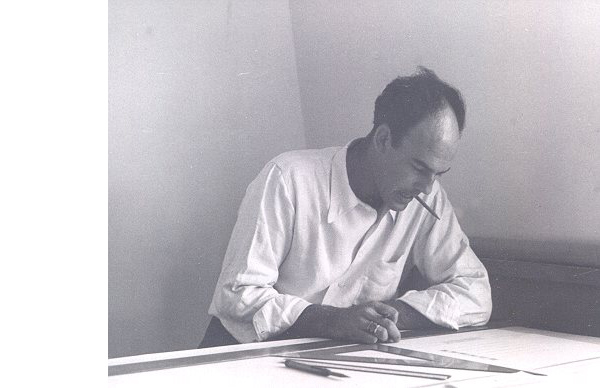 John Lautner was a big man who practiced architecture in big gestures. He could not draw very well, or very pricisely I should say, so he drew with a thick pencil in large, sweeping gestures. He then left it up to his staff to figure out the details.

He is best known, among midcenturymodernophiles (a term I just made up), for the Chemosphere House, and next perhaps the Elrod House in Palm Springs. But after having watched the movie Infinite Space, the Architecture of John Lautner, I have a feeling that he would not be satisfied in knowing that he is filed away in history just in the midcentury modern section.

Lautner’s work deserves a much broader appreciation because of the extraordinary way it expresses universal principles such as a building’s relationship with nature and the plasticity of materials such as concrete. He hated to have any particular style attributed to him as he saw each of his projects as a fresh and unique work that defied any kind of style.

The Googie style is often attributed to Lautner, and rightly so, as his designs for roadside diners was its genesis. The term Googie comes from the name of a diner, whose owner named it after his wife. This style captures the bold and outlandish forms that restaurants and diners took during the postwar era, really pushing what could be done structurally with concrete, steel and glass. It also symbolized a sense of optimism and playfulness, plus a love of the car. But, as always, Lautner hated to be pigeonholed into any one particular style and resented that his commercial work was characterized as Googie.

It is Lautner’s brash dismissal of how everyone else was doing things at the time that allowed him to produce such unique and expressive houses. He studied under Frank Lloyd Wright and garnered from him the idea of integrating buildings into the landscape. Think Taliesin, which means brow in Welsh. Wright always espoused that a house should be built on the brow of a hill, never on top of it, showing a deference to nature. Lautner took this concept and mastered it in his own way.

He was not afraid to bring nature inside the built environment, as he did in the Elrod House with the rock outcroppings, or as he did with the Pearlman Cabin where the owner said, “He brought the woods into the home and the home into the woods.” Sometimes he would build his homes right into a hill, and sometimes he would create views or extend the house so it nestled into the surrounding landscape, creating the experience of living within nature.

Lautner’s daringness with how a resident would experience one of his homes brought us extraordinary forms that are unparalleled even today. The Chemosphere house looks like a spaceship on a stick. And the Marbrisa House in Mexico looks like a giant amoeba that is grabbing onto a hill. But Lautner didn’t create these shapes arbitrarily. These extraordinary forms were a result of how he wanted his buildings to interplay with nature, whether it was by creating views, being able to step right out into nature or experiencing it while moving through daily life within the house.

Lautner is yet another underrated but incredibly brilliant architect in American history. He is worth a look particularly because he did extraordinary work right in our backyard, in the southwest, based in Los Angeles. You will have a chance to take a look at his amazing body of work at tomorrow night’s screening of Infinite Space, the Architecture of John Lautner at the Scottsdale Museum of Contemporary Art brought to you by No Festival Required and as part of Modern Phoenix Week.

This film will take you through some of his most beautiful and innovative projects, and it’s not just a handful, there are quite a few! You will be dazzled by his homes’ gorgeous interior spaces as well learn about how he masterfully used wood, steel and concrete structure to express beautiful and unlikely forms.

Don’t miss this opportunity to see the extraordinary work of this largely unsung genius. Here are the details of tomorrow night’s screening:

What: Screening of Infinite Space, the Architecture of John Lautner. Call the museum front desk at 480-874-4666 to get a ticket held at ‘will call’. The Lounge only holds about 70 people. Or, you can take your chances with a walk-up.

Where: The SMoCA Lounge at SMoCA (Scottsdale Museum of Contemporary Art)

Brought to you by: No Festival Required, sponsored by Woodesign in conjunction with Modern Phoenix week