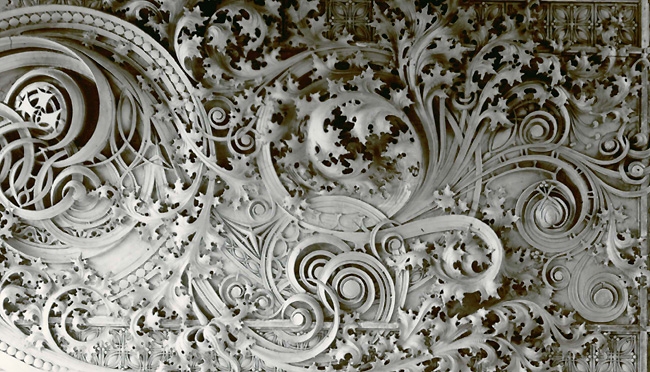 Louis Sullivan: The Struggle for an American Architecture

The story of Louis Sullivan isn’t just important for architecture, it’s an important part of American history. He was many years ahead of his time, he continually broke new ground and he was, undoubtedly, an original.

His most ardent dream was to establish a decidedly American architecture. At the time he came on the scene as an architect in Chicago in the late 1800’s, the zeitgeist was to emulate European architecture. This young nation didn’t have a voice of its own yet when it came to the art of buildings and it still deferred to Europe to tell it what to do.

Sullivan was having none of it. He, almost single-handedly, and the burden turned out to be almost too heavy to bear, set out to create an original American architecture. His unwaivering commitment to this mission proved to be detrimental to his career, which suffered because time and again Sullivan adamantly stood his ground and refused to copy European styles.

Though he is best known for his skyscrapers in Chicago and his mentorship of Frank Lloyd Wright, his story goes so much deeper than that. His impact on architecture and American history is much more significant than his buildings in Chicago and who worked for him.

And that’s why you should see the movie that No Festival Required and PURL are screening on Thursday, March 15 at the AIA called Louis Sullivan: The Struggle for an American Architecture. Not only will you learn about Sullivan’s role in the genesis of an original American style, but you’ll also discover the confluence of circumstances that led him to die a poor man.

Aside from understanding the deep historical significance of Sullivan’s work and philosophy, you should see the movie because it adoringly displays his magnificent works. The director, Mark Richard Smith, devotes long stretches of footage to give us a close look at Sullivan’s celestial talent with ornamentation, which makes for the most inspirational parts of the film.

Don’t miss the opportunity to watch the story about one of the most influential, talented and courageous, though also one of the most underrated architects in American history. Below are event details. Click here to RSVP.

This screening is sponsored by Woodesign.

Photo credit: An example of Sullivan’s genius with ornamentation. Image from edwardlifson.blogspot.com.

Tags: aia arizona, louis sullivan, louis sullivan a struggle for an american architecture, no festival required, PURL
« Canstruction Phoenix: Giving Back to the Community Through Design  |  Bow Ties and Boutique Business in Phoenix »