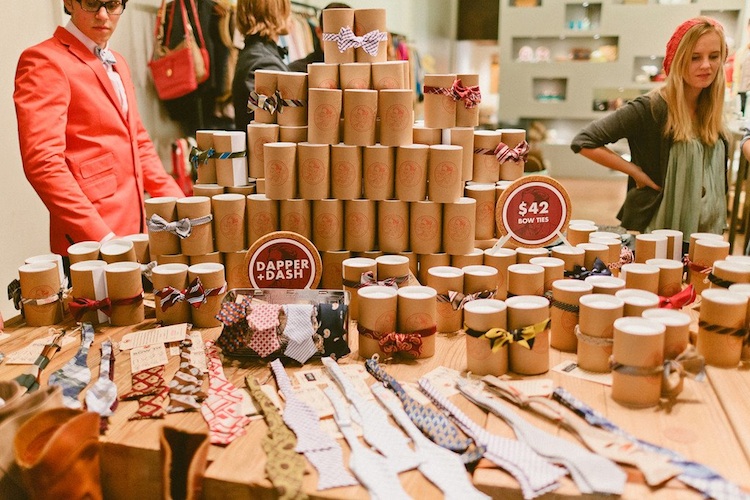 Today’s post is by a new contributing writer to Blooming Rock, Feliciano Vera, an entrepreneur in real estate and finance.

Jim McPherson does not know how to tie a bow tie.  Lingering over the antiqued wood display table at Mercantile, he brushes aside that fact and ushers us closer, in an almost conspiratorial manner.

“Look,” flipping over one of the many bow ties. “This tie was originally made from another that was sold at the Broadway.  And that one over there was a tie from Goldwaters.”

Clutching a purple and white checked sample, my eye is drawn to another bow tie, an abstract cream and red job.  Teleporting me into a personal reverie, Dapper + Dash’s grand opening crowd of well-wishers and hipster sartorialists dissolve into a cross cut of memories.  I am transported back to the not-too-distant past of my childhood, running impatiently through Chris Town and Park Central Mall as my mother shopped.  In a parallel frame, I am distracted at a collegiate black tie fete, thrown for no other reason than to put mileage on our tuxedos.

Aaron Kimberlin likely did not have such juxtaposed scenes in mind when he decided to start Dapper + Dash, his boutique bow-tie enterprise.  Combining a penchant for design with whimsy and story-telling moxie, Kimberlin may not be the first to reimagine a piece of fabric. That he is taking the risk to start his business in downtown Phoenix struck several of us as more than a bit of naïve optimism.  Implicit in the start of the business is the notion that there are more than a handful of men willing to fork over their hard-earned scratch on a bow tie.

Not Williamsburg or Abbot Kinney.  Not the Pearl District or Noe Valley.

Kimberlin is the latest entrepreneur to draw inspiration from the resurgence of the central city, joining the ranks of Frances and Smeeks’ Georganne Bryant, Bunky Boutique’s Rachel Malloy, and the evening’s hosts at Mercantile, Shauna Thibault and Christophe Kaiser.  Wander through any of their downtown and Central Phoenix establishments and a collective commitment to design becomes clear.  Beyond purveying repurposed and eclectic fashion, their growing numbers – in the middle of the Great Recession no less – paint a vivid portrait of a Phoenix that would be unrecognizable to the suburban interloper versed solely in the dreary monotony of a power center.

Fusing business acumen with creative expression, the growth of these businesses challenge the truism that Phoenix, as a market, can be defined solely by credit tenants trading in fashion-as-commodity, whether Old Navy or Chico’s.  Reclaiming and reusing existing physical spaces within the very heart of the region, their success suggests that Phoenix is home to a growing class not content with the idea that expression can be commoditized.

Their ranks are small, but they are as brave as their clientele.  After all, it takes a brave and contrarian man to sport a bow tie.  Especially in a state whose official neckwear is the Bola Tie.

I bought two ties.  Jim bought one.  That makes at least two of us.  I have no doubt there are many more.

Leave a Reply to Feliciano Vera