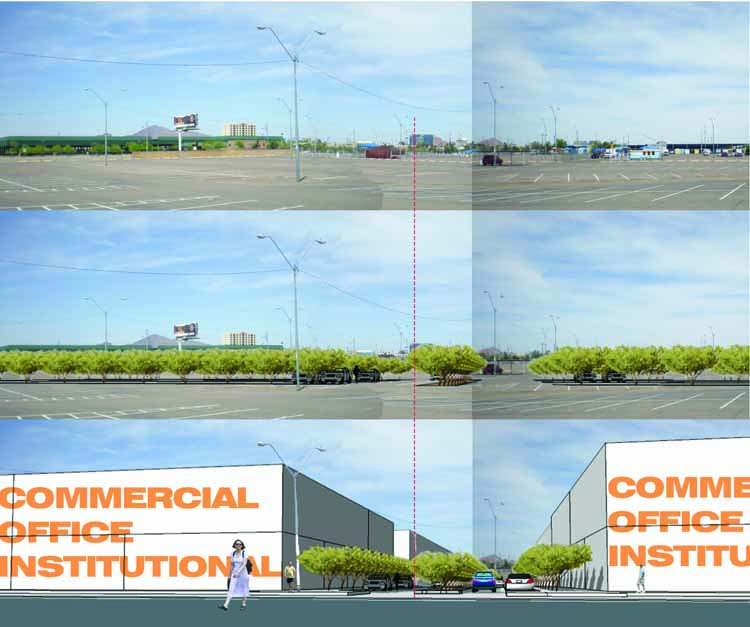 Today’s post is by landscape architect and urban planner Kirby Hoyt, someone I met recently and immediately hit it off with. Kirby, along with his partner Rob Izer, just opened shop for their company Edge Industries on Grand Avenue. They call their studio the Funk Lab and it’s a place where great ideas are born, incubated and implemented and so I try to hang out there as much possible.

Kirby Hoyt, founder of EDGE Industries, holds a Master of Design Studies from Harvard University’s Graduate School of Design and a Bachelors of Landscape Architecture degree from Iowa State University. His firm, EDGE Industries, was created as a response to banal corporate design with its primary focus on landscape urbanism, public art and urban design. His design philosophy values context of place and he has the ability to find beauty in prosaic, common and forgotten realms.

Several years ago when I was in graduate school at the GSD, I took a class under Alan Berger about the concept of landscape urbanism. I was very intrigued by the concept as we challenged what it was about and how it related to the creation of cities. Guest lecturers included Charles Waldheim, the creator of the neologism, and predominant followers/practitioners such as Chris Reed. During our course Alan was also promoting his concept of Drosscape (of which he later wrote a book of the same title). One of the overlapping concerns of both of these ideologies included the notion of the separation of uses, most commonly, how modern cities separate nature and culture.

During the last couple of years, my practice has been diligently studying the urban conditions of Phoenix. The low-hanging fruit is the domination by the automobile and its support systems — streets, freeways, and parking lots. Because of the massive size of this organism, the Urban Heat Island effect (UHI) becomes a consequential circumstance. Over the last fifty or so years the average nighttime temperature in Phoenix has risen approximately 12 degrees due to UHI. In simplest terms, asphalt becomes a heat sink during the day and releases through the night, thus forcing our air-conditioning systems to cool an additional 12 degrees. The Valley already uses something like 100,000,000 gallons of water each day just to supply electricity. Each additional degree of nighttime temperature means every household will use 677 more gallons of water per year to produce their energy. Do the math: 677 x 12 = 8,124 gallons per year per household; that’s something like 9 billion gallons of water being used to produce electricity because we’ve formed environments that make it hotter at night.

Armed with this information, the potential for new urban conditions was considered a worthwhile investigation. Our response to these issues is D.U.R.T.  It’s an acronym for Drainage, Utilities, Recreation and Transportation. It was created to describe a new method of urbanism that synthesizes infrastructural systems with urban amenities in desert environments. D.U.R.T. is used to express landscape urbanism as an appropriate operation for constructing these environments. It encompasses streets, parks, trails, parking lots, and other landscape systems found in desert cities. The concept integrates and overlaps program in order to condense and create additional capacity. One of the primary considerations of this approach is to mitigate the urban heat island effect. An overall reduction of hardscape mitigates the consumptive demand for detention caused by storm events and inherently reduces radiation of heat absorption. D.U.R.T. also promotes urban forestry where possible to mitigate heat absorption while simultaneously providing more comfortable climatic conditions for humans. In a slightly profound way, D.U.R.T. reintegrates nature and culture as a synergistic ecosystem.

To demonstrate how this all works, take for instance a typical residential street in the Valley. They are constructed with an average width of 40 feet of heat-imbibing asphalt. Each drive lane is 12 feet wide with 8 feet of designated parking on either side accompanied with concrete curb-and-gutters. The ironic thing is, within most of the HOA-dominated neighborhoods in the Valley, parking is not used much due to limitations, such as the restriction of no overnight on-street parking. The next component on these systems is the utility easement, which are located at the back-of-curb adding another 6 to 10 feet of space that cannot be planted with trees, thus making it difficult trees to cast shade on the parking, let alone the street. Our D.U.R.T. proposal would put the street on a healthy diet. There would still be two drive lanes at a width of 12 feet for a total of 24 feet of asphalt, but parallel parking located on both sides at a width of 10 feet would not be constructed of asphalt, rather with permeable pavers or stabilized decomposed granite. Down the center of these parking lanes would be street trees at a distance of approximately 32 feet on center to allow the cars to be shaded while creating a canopy over the majority of the street to mitigate heat absorption. We feel these streets can be safely used by pedestrians and bicyclists which further aids in traffic calming. In some cases we propose lining the edges of the corridor with drainage ditches, reminiscent of Hohokam and later irrigation ditches. Adding all of this together, we now have a narrow driving corridor that calms traffic (safer), offers cooler parking conditions, creates a place based on desert cultural landscapes, and minimizes the amount of asphalt surface by 40%.

Compare this conventional street system with the D.U.R.T. system at a length of one mile. The D.U.R.T. street system requires almost two acres less of asphalt plus requires no curb-and-gutter. This reduction of material translates into a direct correlation of reduction of heat and carbon-release from the production of the asphalt and concrete, and secondly, it will mitigate long-term effects of UHI.
By implementing a D.U.R.T. street system, storm water detention is also minimized. Our proposal includes incorporating linear park and drainage systems that allow for pedestrian and bicycle connectivity with other neighborhoods. By viewing the urban realm as a larger ecological system rather than disconnected nodes of development, an integrated connected system for pedestrians and bicycles can thrive and promote alternative transportation and lifestyle options.
Our concepts have also been investigating dense urban conditions where multi-story buildings line the edge of the right-of-way and integrate retention channels down the center of the street. Trees would line both sides of the street and down the middle of the channel to reduce UHI and create a human comfort zone.

One of the interesting things we’re exploring is how the D.U.R.T. can alter and/or adjust the social space of cities.  For people to comfortably utilize space in the Phoenix, climatic conditions are often the highest determining factor. We are exploring how to “furnish” these zones to emancipate social interaction, respond to natural forces (think summer monsoons) yet not contend for space (such as a dedicated detention pond), and enhance a sense of desert living. We are interested in how these spaces can be appropriated for more than just auto use. There is potential for a variety of temporal conditions that can support a neighborhood’s cultural and social well-being, such as farmer’s markets, yard/block/garage sales, festivals, car shows, holiday events and more.

While we understand the barriers to D.U.R.T. are probably going to come from municipal fire departments, street departments, and others who will challenge it because of its unconventional nature, we feel it’s a dialogue worth starting. We acknowledge it will be a lengthy discussion and would appreciate your input. Feel free to leave a comment and tell us what you think.