Inspired by the 26 Blocks project, I thought today I’d write a review of the best urban block in Phoenix: the block bounded by Central Ave, 1st Ave, Monroe and Van Buren. For the purposes of this article I’m going to refer to the block as “the Schoolhouse Block” because it was home to the first schoolhouse in Phoenix, an adobe structure built in 1874. The schoolhouse block is not only beautiful, but it has a mixture of uses that would make Jane Jacobs’ heart swoon. If we ever want to have a truly great downtown, we must find a way to replicate the Schoolhouse Block across the square mile that makes up Downtown Phoenix. 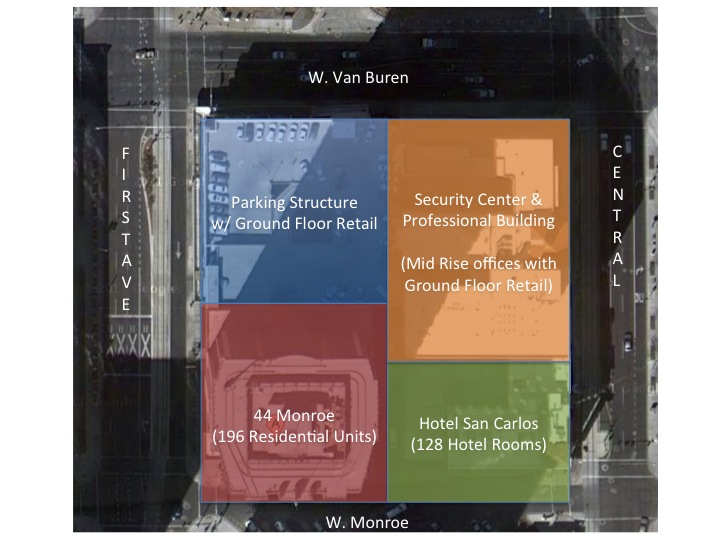 The Schoolhouse Block is one of only a few blocks in urban Phoenix that gets it all right; it has buildings built right up to the sidewalk, shady awnings and trees, ground floor retail, good density, and of course, a terrific mix of uses. The entirety of the block is built directly up to the street – something that’s so basic, yet seems to elude much of our urban fabric. In contrast, just across the street, the Chase Tower not only retreats from the City behind an uninspiring plaza, but is also sunken into a pit, and surrounded by a fortifying wall! No wonder even with its recent rehabilitation no one is ever seen in Chase Plaza; it was designed more like a medieval stronghold than a place for people to enjoy. Buildings of moderate height built to the sidewalk are key for Phoenix because the structures themselves shade the pedestrians below at many times throughout the day.

Since the San Carlos opened in 1928, long before widespread air conditioning, it had to be creative about keeping Phoenicians cool.  Terrific deep-set shady awnings surround the Hotel San Carlos. These serve not only to shade passersby but also those enjoying the San Carlos’ patio dining and, of course, they cut down on the heat (and thus on energy consumption) entering the lower floors.  The Schoolhouse Block’s sidewalks allow enough room for shady street trees to cool pedestrians. While most of the trees are still little more than saplings, having been planted during Light Rail construction, eventually the block should be well adorned in vegetation.

Every single building on the Schoolhouse Block provides space for ground floor retail, one of the most essential elements to a good urban block. Unfortunately, much of the retail space is currently unoccupied due to the lagging economy. The space remains empty, not as a testament to a bad design of the block itself, but due to the failures of the rest of Downtown, which doesn’t house enough people to make the retail necessary. As 44 Monroe continues to fill up with renters and the economy recovers, the retail spaces on the Schoolhouse Block will likely be some of the first in Downtown to fill up.

The population density of the Schoolhouse Block is staggering. 44 Monroe has 196 units and the San Carlos Hotel has 128 rooms; assuming single occupancy across the board, the three acre block could be home to as many as 324 people per night. If that same density were expanded across Downtown it would mean there would be over 69,000 people in a square mile — that’s over two and a half times the density of New York City! Now of course the Hotel won’t be 100% occupied on most nights, and 44 Monroe may never be fully leased, but even using far more conservative numbers the block is very dense. Ignoring the temporary bodies at the San Carlos and figuring very conservatively that 44 Monroe will be home to 100 people, if the Schoolhouse Block’s density was repeated throughout Downtown, our core would be as dense as Queens (approximately 20K people per square mile). Even if the rest of Downtown Phoenix were only half as dense as the Schoolhouse Block, it would be approaching the density of metro Portland, Oregon (approximately 11K people per square mile).

Of course, the Schoolhouse Block’s best quality is its great mixture of uses – there’s seemingly something for everyone. 44 Monroe now has permanent residents in condos as well as renters in apartments. The San Carlos hotel brings in a constant stream of different people to stay in its charming hotel rooms. The Security Building houses ASU’s Phoenix Urban Research Lab as well as government offices.  Private offices are also present, as are unique local shops and eateries. The block also provides a parking garage, something that is unfortunately necessary in our auto oriented ‘burg. Though, as parking garages go, the one on the Schoolhouse Block isn’t bad; it has multiple retail spaces along the ground floor that have housed many restaurants over the years, and it’s entrances for cars are minimally invasive to pedestrians.

As if the Schoolhouse Block wasn’t cool enough, it’s also extremely beautiful and boasts a terrific variety of architectural styles. The San Carlos is done in an Italian Renaissance Style; the Security Building is similar, though with a bit more of Beaux Arts flair. Between the two beautiful 1928 structures is a terrific Mid Century Modern International style office building, and 44 Monroe’s contemporary modernism makes it one of the more handsome residential buildings in Arizona.

Luckily due to Phoenix’s newly adopted “Urban Form Code” future developments in the Downtown area should be looking more and more like the Schoolhouse Block and less like awful dead zones. The City, lead by the brilliant (and sadly not long for Phoenix) Carol Johnson did an excellent job on the Form-Based Code, which emphasizes putting similar buildings together instead of zoning by use.  The Urban Form not only requires future buildings to provide shade, it also dictates cool building materials, building orientation, and a host of amenities that will make Phoenix’s summers more bearable for pedestrians.

As good as the Code is though, we must remain vigilant when it comes to enforcement. Current buildings in our Downtown already wantonly ignore code stipulations that are on the books; like CityScape’s mechanical penthouse not being properly screened.  For too long the attitude in Downtown Phoenix seems to have been “We’re happy with whatever we get,” now its time to start demanding quality buildings and sensitive mixed use design to foster the Downtown Core we all want and deserve.