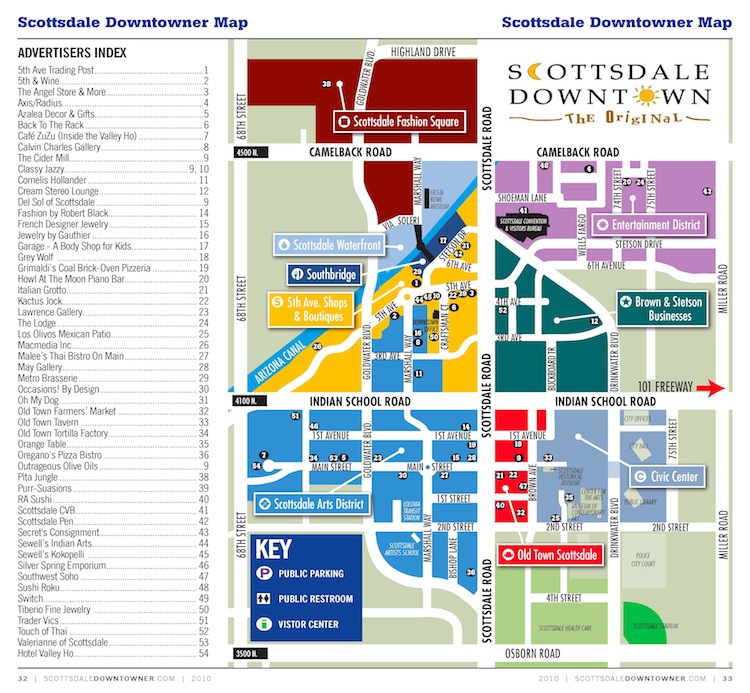 3 Fallacies About Scottsdale Followed by 3 Possibilities

I’m currently reading Jill Bolte Taylor’s book, “My Stroke of Insight” about her experience with a stroke that left her with only the right side of her brain functioning. Having lost the use of her left brain, she found out first hand what it was responsible for.  One of the things the left part of our brains does is judge whether something is good or bad, right or wrong.

For example, Jill, since her childhood, hated squash. But because of her stroke, she sort of forgot that and tried squash again in her adulthood and now she loves it. The left part of our brain not only judges what’s good and bad, she realized, but it actually holds on to that judgment for a very very long time. It is the right side of our brains that can adapt to new information and actually change our views.

So Scottsdale is to me what squash was to Jill Bolte Taylor. I decided as an urbanist that I didn’t like Scottsdale, thank you very much. And the more stories I heard about it, i.e. the fact that they don’t want the Light Rail or want to be a part of Discovery Triangle, the more it confirmed my left brain’s decision about Scottsdale.

But last week I sat down with Scottsdale resident and the man behind Creative Connect, Dan Semenchuk, at a coffee shop called Sola in Downtown Scottsdale. Ironically, Dan’s very interested in getting people’s right brain juices flowing, as he’s all about fostering and supporting a community of creatives. And last week, he happened to appeal to my right brain, the side that actually is capable of changing our views and adapting to new information.

Here are 3 fallacies about Scottsdale that he knocked right out of me in our hour-long conversation.

Scottsdale is one big homogenous suburb, it’s all the same, there is no difference between North Scottsdale and the rest of Scottsdale.

there is a Downtown Scottsdale. There is actually a real “city center” in Scottsdale and it is suprisingly dense (by Phoenix standards), walkable and shaded.

Scottsdale is a mixture of showing off and being fake – Fashion Square Mall, the Borgata and Kierland Commons mixed in with fake western architecture, fake Native American kitsch, and fake boobs.

there are real, down-to-earth, hardworking folks that live and work in Scottsdale, especially in south Scottsdale. There are real neighborhoods, that are historic, that aren’t comprised exclusively of 5000 sf homes and that have been owned by the same people for a very long time.

Scottsdale has a rich history of real innovation and excellence. Evidence can be found in the AMAZING mid-century modern architecture that graces much of South Scottsdale.

The art in Scottsdale is crap, made for the mass consumption of wealthy tourists visiting “the wild west”.

there are some really great, cutting edge artists and galleries in Scottsdale that have nothing to do with “the wild west”. In fact Scottsdale has been a bonifide artists hub since it’s incorporation in 1951.

Finally here are 3 possibilities he planted in my brain that I’m excited to see come to fruition:

Urban vibrancy and a sense of community in Downtown Scottsdale. Dan sees a Scottsdale where locals like him can walk and bike to local businesses, hang out, meet friends and actually have a rich community experience in the center of Scottsdale. He also sees an ethnically and economically diverse population wanting to live and thrive in South Scottsdale.

Making Scottsdale a hub for creatives, especially visual artists. Dan wants to create an environment in Downtown Scottsdale that attracts avant-garde, cutting edge, out-of the box creatives. And the way he wants to do this is to rally everyone, especially the local business owners, to start working together, instead of thinking of one another as competition.

Cross-pollination. This is the possibility that excites me most. First of all Dan wants those of us who live in Phoenix, especially Central or Downtown Phoenix, to get past our preconceived notions about Scottsdale. And second, he wants Phoenix creatives to work hand in hand with Scottsdale creatives to expand our individual horizons and help build our respective centers of arts and innovation. He also wants to introduce some of the edgy Phoenix creativity that shows up in things like murals in the Roosevelt district and on Calle 16 to Downtown Scottsdale. In fact, he is currently working on a project to produce Scottsdale’s first mural right across the street from Sola’s.

So stay tuned and watch for the revitalization of South Scottsdale. Even better, play a part, frequent the local businesses there, find ways to cross-pollinate, and support the efforts of people like Dan who’re working hard every day to bring a sense of place, social equity, economic diversity, and soul to the area.

Image Credit: A map of Downtown Scottsdale from the 2011 Scottsdale Downtown Map and Directory to give you a sense of what’s south of the canal.